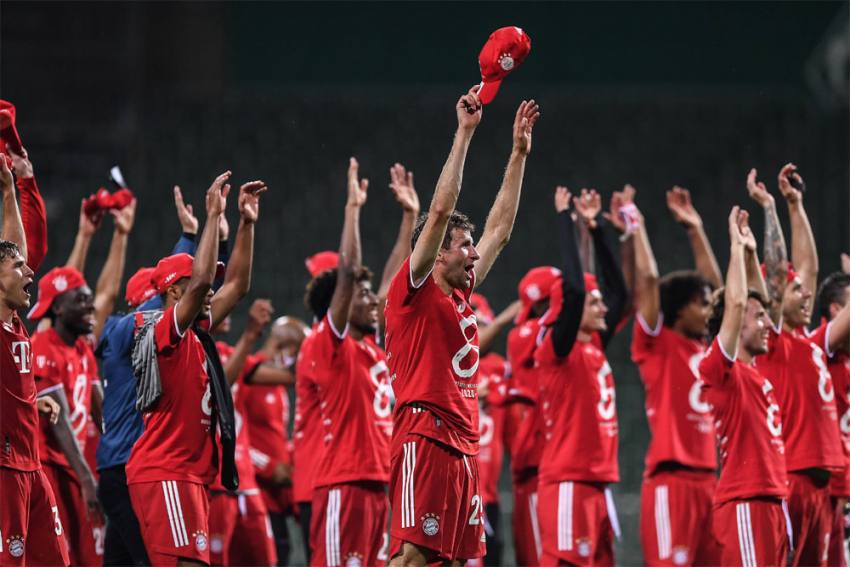 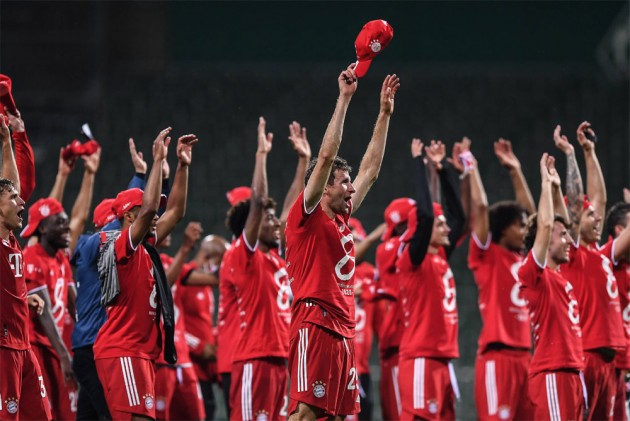 Hansi Flick's men approached Tuesday's clash at a rain-soaked Weserstadion knowing victory would be enough to retain the crown with two games to spare.

As in Saturday's 2-1 triumph over Borussia Monchengladbach, Bayern were below their best but it mattered not against opposition fighting for their top-flight lives.

Robert Lewandowski's sublime first-half finish proved enough to seal points and the championship, his 31st goal of the league campaign wrapping up a 30th German title despite Alphonso Davies being sent off for a second bookable offence 11 minutes from time.

Bayern were sluggish out of the blocks and lacked their usual fluency, the visitors fortunate to see Maximilian Eggestein's low drive from the edge of the area flash wide of the left-hand post.

Flick's side enjoyed predictable dominance of possession but it did not tell until the 43rd minute, when Lewandowski produced a lethal demonstration of his finishing prowess.

Lewandowski chested Jerome Boateng's ball in from the right and fired a right-footed effort beyond Jiri Pavlenka to surpass 30 goals in a Bundesliga season for the first time in his career.

The Poland international had the ball in the net again within 10 minutes of the second-half restart but the flag was correctly raised after Thomas Muller strayed offside in the build-up.

Davies was dismissed for a foul on Milos Veljkovic before Pavlenka was forced into action to prevent Kingsley Coman from making the game safe, with Manuel Neuer producing heroics at the other end, his fingertip save denying Yuya Osako a dramatic late leveller.

What does it mean? - Werder fail to rain on Bayern's parade

Werder acquitted themselves well but paid the price for the mistake of giving Lewandowski space in the box as the former Borussia Dortmund talisman fittingly netted what proved the decisive goal.

Bayern can look to rotate their squad in the final two league games with an eye on the DFB-Pokal final with Bayer Leverkusen on July 4 and the eventual resumption of the Champions League. Werder are three points adrift of 15th-placed Mainz and are level on points with Fortuna Dusseldorf, who occupy the relegation play-off place.

Suspended against Gladbach, Lewandowski's absence was telling as Bayern laboured in front of goal. His title-clinching goal was a scarcely needed reminder of why he is one of the most feared strikers in world football.

Just one of Werder's seven league wins this season has come at home, and that was back in September. Despite a decent performance, they rarely looked like recording a second or putting the Bayern party on hold until Neuer's stunning save from Osako.

The first of what are effectively a pair of tune-ups for the Pokal final sees Bayern host Freiburg on Saturday. Werder face a massive clash with Mainz as they bid to avoid the drop.