Lionel Messi missed a penalty but scored twice, and Antoine Griezmann also netted in a LaLiga win over Valencia that was nervy at times 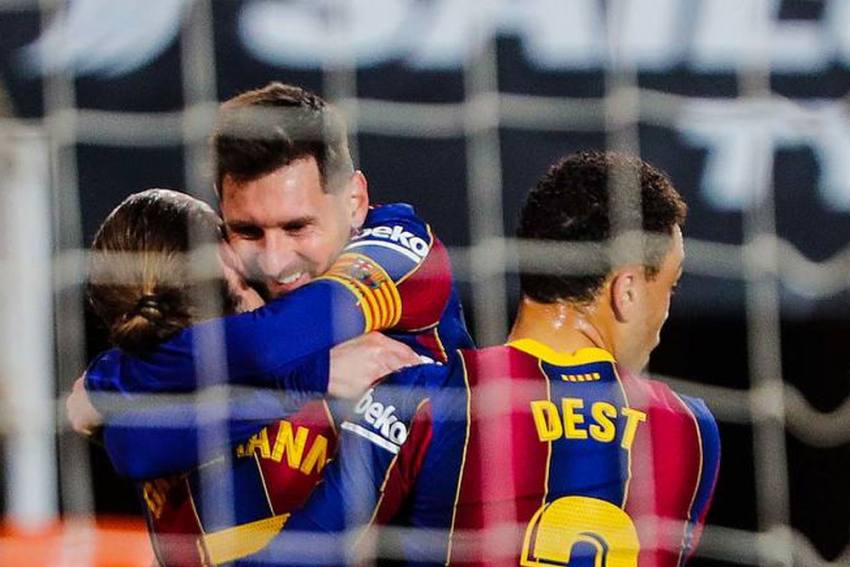 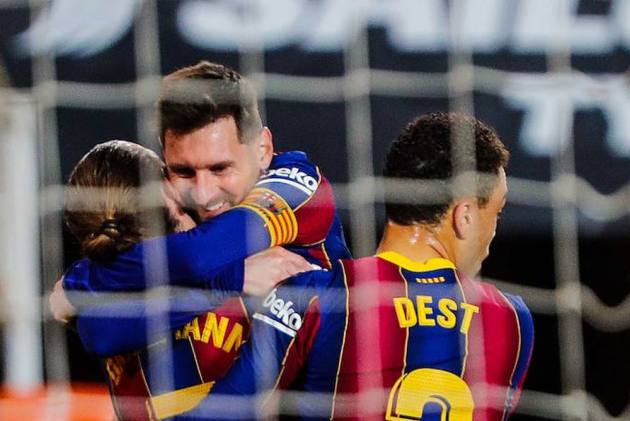 Lionel Messi missed a penalty but scored twice, including a sublime free-kick, with Antoine Griezmann also on target at Mestalla.

The Barcelona goals came after the jolt of conceding early in the second half when Gabriel Paulista headed in from a corner to give the hosts the lead, with visiting boss Ronald Koeman banned from the touchline after his dismissal in the shock defeat to Granada.

Carlos Soler drove in a spectacular late second for Valencia, but Barcelona's success means they are back to just two points behind Atletico, and level again with Real Madrid, as the saga of the title race heads for a thrilling conclusion.

LEO #MESSI DOES IT AGAIN! WHAT A FREE KICK! 1-3! #VALENCIABARÇA pic.twitter.com/fsWifEgYYl

Pedri wasted a great chance in the third minute as he shot wide of the right post after being teed up by Frenkie de Jong, and Ronald Araujo's effort on the stretch from a teasing Messi free-kick was blocked away by goalkeeper Jasper Cillessen.

Valencia's Goncalo Guedes should have scored early in the second half but allowed Marc-Andre ter Stegen to push his shot wide for a corner. However, Gabriel made no mistake when Soler swept the set-piece delivery across from the left, heading in at the far post.

Barcelona drew level in the 57th minute through Messi, despite him failing from the spot. Toni Lato conceded the spot-kick after jabbing his right arm at a floated Messi pass, and although the Argentinian saw his tame penalty parried by Cillessen, Pedri's shot as the ball pinged around the box was deflected to Barcelona's record scorer, who netted from close range.

The visitors went ahead six minutes later when De Jong's powerful header from Jordi Alba's cross was well saved by Cillessen but palmed only as far as Griezmann, who tucked home.

Messi's second goal was a 69th-minute curling free-kick from a central starting point that found the back of the net via the inside of the right post, giving the goalkeeper little chance, a speciality of Barca's captain.

It was arguably topped by Soler's brilliant long-range finish in the 83rd minute, but Valencia could not find a leveller.

Barcelona were the dominant side here but they needed a helping hand – literally – to get back on level terms after the shock of conceding soon after half-time.

Messi's tame penalty showed the tension was affecting even him, and it was a lucky break that allowed him to atone.

Valencia had their chances but their eight-game unbeaten run at home is over. Barcelona had not won in their most recent three trips to Mestalla (D2 L1), so this victory is not to be sniffed at.

It feels as though Messi is back in love with Barcelona. He wants this title and naturally he was the driving force behind this win. Barcelona had 68 per cent of possession and Messi had five shots, three of which were on target – including the saved spot-kick.

He had 107 touches, beaten only by Alba and Clement Lenglet, and was involved in a team-high 14 duels, winning nine of those (64.3 per cent), and of course he plundered those two goals, taking his career total to 31 in 36 games against Valencia in all competitions.

Only against Sevilla (38 in 43) and Atletico (32 in 42) has Messi scored more goals in his Barcelona career.

Messi's delightful flick into the Valencia penalty area was about to reach De Jong when Lato thrust out a hand and paid the penalty. It was a moment he will replay in his head, wondering how much of a banker De Jong really was to score, and he almost got away with it when Messi's casual penalty was pushed away. It was the most temporary of reprieves though. Lato went off injured seven minutes later. It really wasn't his night.

- Messi has scored his 50th direct free-kick goal for Barcelona: 39 in LaLiga, five in the Champions League, three in the Copa del Rey, two in the UEFA Super Cup and one in the Supercopa de Espana.

- Only Robert Lewandowski (36) has scored more goals than Messi (28) in the top five European leagues this season. With his brace here he has surpassed Cristiano Ronaldo, who has netted 27 goals for Juventus in Serie A.

- Messi scored from a direct free-kick and missed a penalty in the same LaLiga game for only the second time. The previous occasion was against Celta Vigo in February 2016, the indirect penalty scored by Luis Suarez.

- Messi has missed consecutive penalties for the first time for Barcelona in all competitions, having failed to convert against Paris Saint-Germain in the Champions League.