Cristiano Ronaldo scored twice late on as Juventus battled back to claim a win over Udinese which boosted their Serie A top-four hopes. 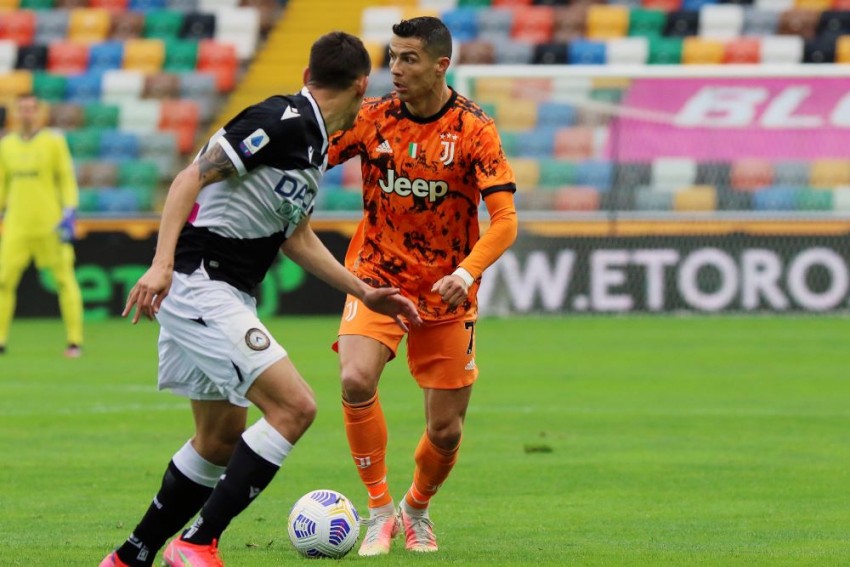 A late Cristiano Ronaldo double gave Juventus a 2-1 win over Udinese in Serie A on Sunday which boosted their hopes of qualifying for next season's Champions League. (More Football News)

Udinese went into the break ahead when Juve's defence switched off after a free-kick was awarded and Nahuel Molina's low shot found its way beyond Wojciech Szczesny.

Juventus fleetingly showed moments of quality but equalised with an 83rd-minute spot-kick from Ronaldo, awarded after the Portugal forward's free-kick moments earlier struck the arm of Rodrigo de Paul.

Ronaldo added a second with one minute left when he headed in Adrien Rabiot's cross at the back post to secure a dramatic late win for Andrea Pirlo, who raced down the touchline to celebrate with Juve's players.

Udinese gave early warning of their threat when Jens Stryger Larsen's shot from distance forced a save out of Szczesny.

The home side took the lead with a quick free-kick which caught Juve off guard as De Paul slipped in Molina and Szczesny could not keep out his powerful angled shot.

The unmarked Weston McKennie headed wide from a good position just before the half hour while Paulo Dybala's deflected shot brought a diving save from Simone Scuffet as Juventus briefly sparked into life.

Ronaldo was largely subdued in the first half with a glancing header over the crossbar his only chance of note.

Tolgay Arslan fired wide from a good position early in the second half and Stryger Larsen saw a curling effort flash past the post as Udinese went in search of a second.

However, Juve were awarded a penalty seven minutes from time when De Paul, stationed at the end of the wall, inexplicably stuck out an arm to block Ronaldo's free-kick.

Ronaldo buried the spot-kick and then completed the turnaround six minutes later, arriving to nod in substitute Rabiot's superb ball to the back post.