Some called time on their careers on a high, but not all of them were lucky to get the farewell they deserved. 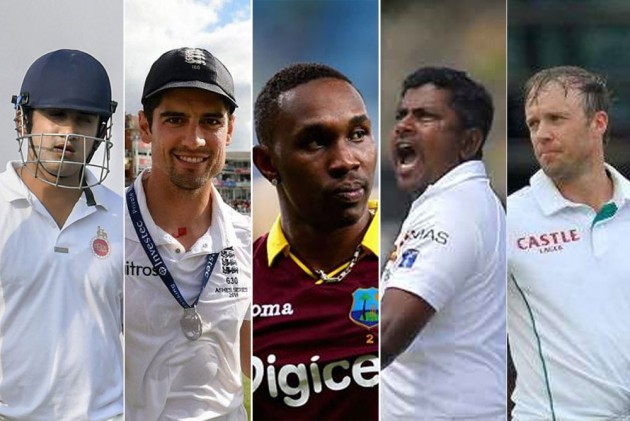 International cricket bade adieu to some of the biggies in 2018. Some called time on their careers on a high, but not all of them were lucky to get the farewell they deserved.

As the year comes to an end, here's a look at top ten retirements

Sports In 2018: Your Month-By-Month Look At Most Important Events, Feats And Controversies

One of contemporary cricket's greatest batsmen, AB de Villiers, called time on his illustrious international career in May, claiming to be "out of gas" after 14 years in the top league.

The 34-year-old former South African skipper said his jaded body was no longer in a position to take the rigours of international cricket after a staggering 420 matches across three formats with over 20,000 runs and 47 hundreds.

But he remains a sought-after player in leagues across the world and could have played the shorter formats.

Former England captain Alastair Cook, country's highest run-getter in Test cricket, retired from international cricket after the fifth and final match against India at the Oval.

The 33-year-old Cook certainly didn't possess the silken grace of David Gower or the genius of Kevin Pietersen but his unwavering concentration and the ability to accumulate runs puts him among the most prolific scorers in the game.

One of the high points of his captaincy will certainly be leading England to a 2-1 series win against India in India back in 2012. He successfully used the spin duo of Graeme Swann and Monty Panesar during that series.

In December, Gautam Gambhir announced his retirement from all forms of cricket, saying that "the most difficult decisions are often taken with the heaviest of hearts."

Gambhir, 37, last played an international match in a Test match against England at Rajkot in November 2016. He last played a professional game in Delhi's Ranji Trophy game against Andhra.

He made India debut in an ODI against Bangladesh at Dhaka on April 11, 2003. Gambhir will be remembered for helping India win both the 2007 World T20 and 2011 ICC World Cup by playing crucial knocks in the finals.

West Indies all-rounder Dwayne Bravo announced his retirement from international cricket in October. The 35-year-old player will, however, continue to play T-20 franchise cricket around the world.

Bravo, regarded as one of the most gifted all-rounders the game has seen, made his international debut in 2004 and played 40 Tests, 164 ODIs and 66 T20Is. He last played an international match, a T20I match, more than two years ago against Pakistan in September 2016.

The 35-year-old last played a Test in 2010, then became one of the many 'so-called' West Indian mercenaries plying their trades in various T20 leagues around the world. He was an integral part of the MS Dhoni-led Chennai Super Kings. Effective with both bat and balls, he can win matches single-handedly. Known for scoring quick runs, he was devastatingly deceptive with his slower deliveries too.

After many retractions, one of England's finest batsmen Kevin Pietersen ended his professional cricket career after the Pakistan Super League's third edition in March.

Finally confirming the retirement, the 38-year-old posted a photo of him on Instagram, hugging his son before leaving to join the Quetta Gladiators in Dubai.

The batsman was sidelined by the England and Wales Cricket Board (ECB) in 2012 and again in 2014 after differences with the team management.

But remained an enduring figure in international cricket thanks to his flambouyant batting and outspoken nature.

Australian fast bowler Mitchell Johnson announced his retirement from all forms of cricket in August as his body was "starting to shut down", almost three years after he stepped down from the international game.

The 36-year-old quit Twenty20 Big Bash League (BBL) team the Perth Scorchers the previous month, but had not ruled out playing in the Indian Premier League or other domestic T20 competitions.

Renowned for his ferocious pace, Johnson had previously announced his retirement from international cricket during the Test series against New Zealand in Perth in November 2015, saying he had lost the hunger to play the long form of the game.

Described by long-time mentor Dennis Lillee as a "once in a generation" bowler, the former ICC Cricketer of the Year played 73 Tests for Australia, claiming 313 wickets.

Rangana Herath, the most successful left-arm spinner in the sport's history, ended his cricket career on a sad note as Sri Lanka lost the first Test against England by 211 runs on the fourth day at Galle in November.

The 40-year-old left-arm orthodox bowler took 433 Test wickets in matches, putting him eighth on the all-time list, which has Lankan compatriot Murali Muralitharan at the top with 800 scalps.

Herath also took 74 ODI and 18 T20I wickets. He made his international debut at the same venue, in a Test match against Australia in 1999.

South African pacer Morne Morkel announced his retirement from international cricket in February and played for the Proteas the next month. Regarded as one a part of South Africa's most potent bowling attack, along with Dale Steyn, the 34-year-old decided to go Kolpak.

Mohammad Kaif retired from all forms of competitive cricket in July, almost 12 years after he last played for the Indian team in which he stood out as much for his acrobatic fielding as for his effective lower-order batting.

The 37-year-old Kaif played 13 Tests and 125 ODIs for India and will always be remembered for his match-winning knock of 87 at the Lord's during the epic Natwest Trophy final in 2002.

He was a part of the Indian team that reached the World Cup final in South Africa. Along with Yuvraj Singh, Kaif was among the stars to emerge from the U-19 India stable after leading the Colts to a maiden Junior World Cup triumph in 2000.