After beating Kazakhstan 6-2, the Indian trio of Atanu Das, Pravin Jadhav and Tarundeep Rai lost in straight sets against the top seeds 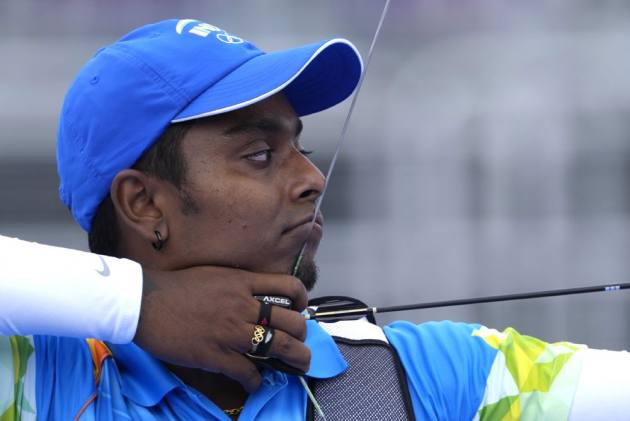 Indian archers bowed out of the team events after failing to get past the mighty Koreans for a second time in the Tokyo Olympics on Monday.

Two days after the mixed team was knocked out by Korea in the quarterfinals, the men's trio of Pravin Jadhav, Atanu Das and Tarundeep Rai succumbed in straight sets against their formidable opponents in the same round of eight stage.

South Korea went on to win the title by smashing Chinese Taipei 6-0.

The twin blow exposed their pathetic shooting in the ranking round on Friday when all the male archers finished outside top-30, handing them tough draws.

Their first-ever Olympic medal hope in archery is fading fast as they will brace for a tougher road ahead in their respective round of 64 individual matches beginning Wednesday.

The Indian men's team, which won a silver at the last World Championships in 2019, started the day at the Yumenoshima Park with a lot of promise, downing Kazakhstan 6-2.

But the Korean team of London 2012 champion Oh Jin Hyek, Kim Woojin and 17-year-old Kim Je Deok -- the youngest archer at Tokyo Olympics -- proved to be too strong against for the Indians.

In pursuit of a sixth men's team title from nine Olympics, the Korean men's team enjoyed a flying start, shooting 10 perfect 10s from 12 arrows while missing only two in the first two sets to apply early pressure.

India were let down by Guatemala City World Cup gold medallist Das who failed to repeat his brilliant show earlier against Kazakhstan. He could not find a single 10 in the three sets.

The Indians responded well in the third set, with a series of four 10s, but Das faltered with an 8 in the last arrow, as Korea enjoyed two near-perfect rounds.

Olympic debutant Jadhav, on the other hand, was brilliant with five 10s, while veteran Rai, in his third Games appearance, also stepped it up with three 10s.

"It's not satisfying obviously," Army veteran Rai said after what could be his last Olympic appearance.

"We shot better than the first match. Of course, we are still improving. We still have our individual matches, so we'll go for that."

Counting on the positives, Rai, who made his Olympic debut in 2004, said: "So far this has been India's best performance at the Olympics (reaching the quarterfinals). Hopefully, we will win medals soon."

Rai's Army colleague, Jadhav, said, "It's quite satisfying. I made a lot of mistakes and hope to correct them next time and win medals for the country."

A dejected Das, who made his second Olympics appearance after Rio 2016, said: "We expected a lot in the mixed team, but unfortunately, it was not our day probably."

"Every match is a final match in the Olympics. The situations are similar whether it's a first round match or a final so we have to keep improving, overcome our fears, thoughts and get over the line," he added.

Earlier in the day, Das had drilled in six perfect 10s to play a crucial role in the team's win over Kazakhstan's Denis Gankin, Ilfat Abdullin, Sanzhar Mussayev in their opening round.

Das showed tremendous resilience to bounce back after finishing a lowly 35th, four places behind Jadhav, in the ranking round on the opening day.

The poor finish had resulted in Das' removal from the mixed team, where his wife Deepika Kumari, paired up with Jadhav and made a quarterfinal exit following a defeat against Korea on Saturday.

Trailing by two points at the halfway mark of the first set, Jadhav and Das finished with two superb arrows, drilling in X each to edge out their Kazakhstan rivals by one point.

Conditions were windy in the second set and the Army duo of Rai and Jadhav looked wobbly, picking 8 and 7 each, but Das made up for that with a perfect 10 and a 9 to give the side a commanding 4-0 lead.

Kazakhstan stepped it up with three perfect 10s and the Indians, too, matched them, riding on two 10s by Das, but an 8 by Rai cost them the set.

The Kazakh team showed intent to bring the match on an even keel but the Indian trio did not concede an inch and sealed the issue with two 10s from Jadhav and Das.