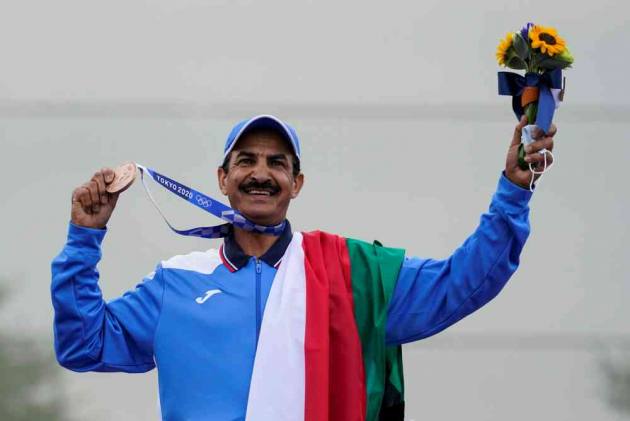 Age is not just a number but also a driving force in Abdullah Alrashidi's quest for doing things as rare as winning an Olympic medal at 58 and activities as striking as shooting in the sport's showpiece wearing an Arsenal FC shirt. Tokyo Olympics | Full Schedule | Sports News

On Monday, the seven-time Olympian claimed the bronze medal in the men's skeet event and soon after pulling off what not many have in the history of Olympics, promised to go for gold at 2024 Paris, by which time he will have become a sexagenarian.

"I am 58 years old. I am the oldest shooter and the bronze medal is worth more than gold for me. I am very happy for this medal, but I hope, at the next Olympics, gold medal. Paris!" he told the Olympic Information Service at the Asaka Shooting Range.

"I'm not lucky enough to win the gold medal, but I am happy with the bronze medal and, with Allah's help, I hope next Olympics, Paris 2024, I have a gold medal. I'll be 61 there and I'll shoot two events, skeet and trap."

But it was the shooter from Kuwait who was trending at the end of their finals.

Alrashidi, who started his Olympic journey at Atlanta 1996, shot 46 in the six-man finals to earn the bronze.

This is his second medal in the Olympics, having won a bronze at the 2016 Rio Games five years ago as an independent athlete, when he shot wearing the jersey of renowned English football club Arsenal FC after Kuwait was banned from participating in the mega-event by the International Olympic Committee (IOC).

On winning a medal as an independent athlete at Rio 2016 and winning this one at Tokyo 2020 representing Kuwait, he said, "(At Rio) I was happy with the bronze medal but I was not happy because there is no flag for Kuwait.

"If you see the ceremony, my head is lowered. I don't like to see the Olympic flag. I need my flag, the Kuwaiti flag. And today, you see me, I am happy when I see my flag and it's the second medal at the Olympic Games and I hope, next Olympics, gold medal."

"Because this is the second medal at the Olympic Games, I am so happy. This is Olympics No.7. Before when I shoot, I am nervous, I can't shoot, I can't relax, and now I relax."

He is also accompanied by his shooter son, Talal, at the Tokyo Games.

"It's the second time me and my son (are) shooting at the Olympic Games. My son shoots trap.

"And I got another son who shoots skeet with me. Now we're two from my family at the Olympic Games. I am happy. Next time, I hope, four."

When asked about competing with Finland's 23-year-old Eetu Kallioinen, who was not even born when the Kuwaiti appeared in his first Olympics back in 1996, in the finals, Alrashidi said, "I see him like this is my son. I am happy, but I want to fight to win because I'm an old man, but I'm still strong."

Naseer A Ganai / 'There is an operation going on in Uri for the past 24 hours. We felt an infiltration attempt has been made. We are looking for them,' said General officer Commanding of Army’s 15 Corps