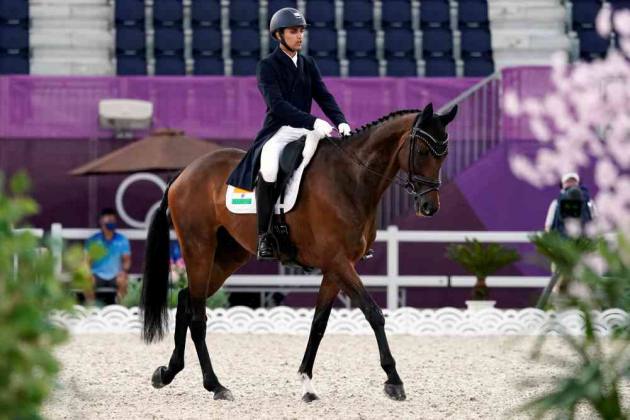 India's first Equestrian to qualify for the Olympics in last two decades, Fouaad Mirza astride his horse 'Seigneur Medicott' put on an exciting show on the first day of individual eventing at the Tokyo Olympics on Friday. Tokyo Olympics | Full Schedule | Sports News

Following a spectacular horse and rider performance, Fouaad sits on the 7th place with 28.00 penalties with 21 riders yet to compete, a statement issued by the Embassy Group, which has backed the rider, said on Friday.

A total of 42 out of 63 riders participated on day 1 of the "Individual eventing dressage" round.

The second day will see the remaining 21 riders compete, concluding the dressage competition.

The field is currently led by Oliver Townend on 23.6 penalties.

Dressage is a form of horse riding where the horses perform a series of predetermined movements in an arena measuring 20m x 60m which has markers to indicate where the changes need to be done.

The arena has markers placed symmetrically indicating where movements are to start and finish and where changes of pace or lead are to occur.

Dressage is the first of three phases in Individual eventing, the remaining two are Cross Country and Show Jumping, the lowest cumulation of penalties in all three phases decides the winners.

Fouaad's next event after the dressage round which is Cross Country is scheduled on August 1.