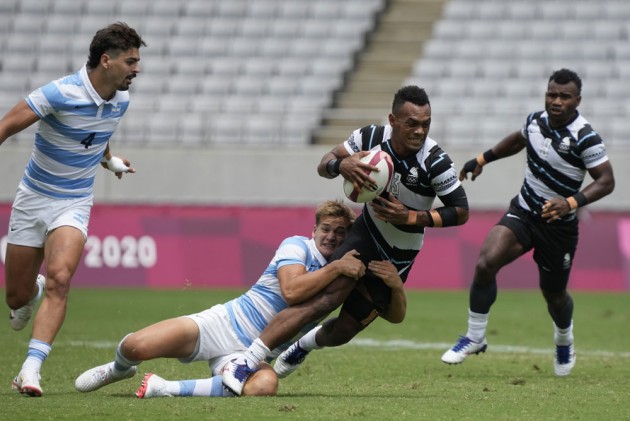 Jerry Tuwai's Fijians are within one victory of back-to-back Olympic gold medals in a sport that is intrinsically part of life in their Pacific island nation. Trying to stop them will be a New Zealand team already assured of winning its first men's rugby sevens medal of any kind.

Fiji beat Argentina 26-14 in the semifinals on Wednesday to set up a night final against a New Zealand lineup that overpowered 2016 silver medalist Britain 29-7 with captain Scott Curry and Regan Ware scoring two tries apiece.

The Argentines produced an inspired performance in the quarterfinals to upset 2016 bronze medalist South Africa. They were down 12-0 early against Fiji but rallied again to take a 14-12 halftime lead on Santiago Mare's wobbly sideline conversion.

The Fijians hit the front against with five minutes remaining when Jiuta Wainiqolo scored out wide. And when Semi Radradra stood up his defender and strolled to the tryline to help extend the margin to 12 points, chants of “Go Fiji Go” went up from the bench in an otherwise quiet, empty stadium.

Argentina and Britain will face off for the bronze.

The U.S. and South Africa will meet for the second time in two days, this time with fifth place on the line.

U.S. flyer Carlin Isles scored the opening and closing tries — the second in extra time — in a 21-14 win over Canada. South Africa led all the way in a 22-19 win over Australia, which will play Canada in the seventh-place playoff.

The South Africans, bronze medalists five years ago, beat the U.S. men to finish atop Pool C but then lost to Argentina in the knockout stage despite having a one-player advantage for most of the match. The Americans let a 21-point lead slip in a 26-21 loss to 2016 finalist Britain in the quarterfinals.

The classification for 9th-12th is complete, with Kenya beating Ireland 22-0 for 9th and 2016 semifinalist Japan finally getting a win to finish off a disappointing campaign at the Tokyo Games — albeit on the last day and to avoid last place with a 31-19 comeback over arch rival South Korea.

Japan kicked off the Olympic tournament against Fiji, hitting the lead before conceding two late tries in a rematch of their semifinal in 2016.

Winger Lote Tuqiri, a star in 2016 when the Japanese team opened with a stunning upset over New Zealand and went on to the semis, said the ban on spectators deprived Japan of a home-ground advantage. The competition draw didn't help, either, with losses to 2016 finalists Fiji and Britain on the opening day.

“Seems like we played our final in the first game,” he said.