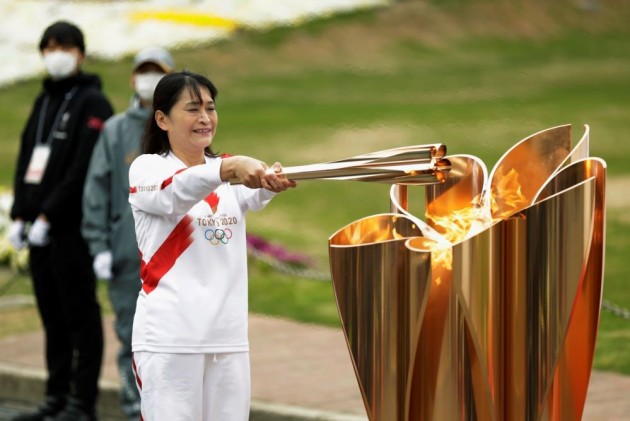 The Tokyo Olympic torch relay is being pulled off the streets in Hiroshima prefecture as COVID-19 cases rise in Japan barely 10 weeks before the opening ceremony. (More Sports News)

Hiroshima Governor Hidehiko Yuzaki said that a ceremony next week without the relay is likely to still take place. This is at least the sixth change to the relay — from rerouting to cancellation — in the last several weeks.

Organizers warned before the relay began that changes and delays were expected in the face of the pandemic.

“It is certain there will be no relay on public streets since we are all trying to reduce going out, and how to do the ceremony without the relay on the streets is still being discussed with the organizers,” Yuzaki said Monday.

The relay began on March 25 in northeastern Japan and is to end on July 23 at the opening ceremony of the Olympics. Tokyo and other areas are under a state of emergency until May 31.

Japan has attributed about 11,000 deaths to COVID-19, but new cases of the virus and its variants are now increasing in Tokyo and the second largest metropolitan area of Osaka.

The relay is heavily sponsored by Toyota and Coca-Cola and has proceeded despite some calls a year ago to cancel it to save money. It involves 10,000 runners crisscrossing Japan with organizers trying to keep crowds off the streets and urging them to maintain social distancing.

International Olympic President Thomas Bach was forced this week to call off a trip to Hiroshima to greet the torch, an embarrassing move with the IOC and local organizers saying the Olympics will be “safe and secure" for fans and athletes.

Yuzaki said the cases were rising at such a rapid pace that it could become an emergency situation unless people curbed their activities.