The Rise And Fall Of Palermo: Remembering The Famous 2009-10 Team

Known as U.S. Citta di Palermo, the Sicilian outfit secured three consecutive top-six Serie A finishes between 2004 and 2007 but there was something different about their famed 2009-10 side. 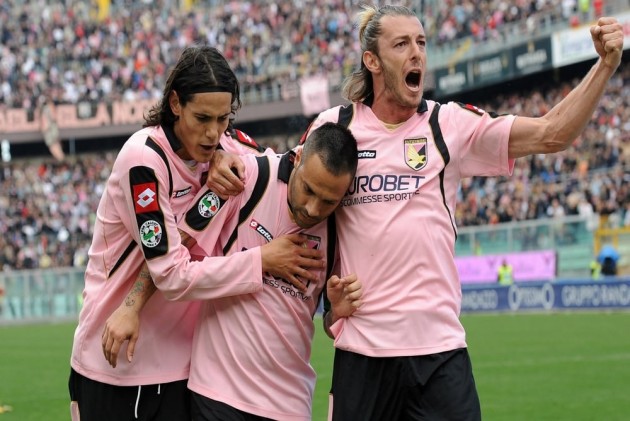 If you go back a decade, Palermo had threatened to become a major force in Serie A football.

Known as U.S. Citta di Palermo, the Sicilian outfit secured three consecutive top-six finishes between 2004 and 2007 but there was something different about their famed 2009-10 side.

There was an extra sprinkle of stardust – Palermo boasting the youthful Edinson Cavani and Javier Pastore, as well as talismanic captain Fabrizio Miccoli, Antonio Nocerino and Salvatore Sirigu.

Palermo dazzled as they celebrated a memorable fifth-place finish, missing out on Champions League qualification to Sampdoria by an agonising two points.

A lot has changed since, however. Palermo were declared insolvent in October 2019 after they were kicked out of Serie B in July last year. Initially relegated to Serie C due to 'administrative irregularities', the Rosanero dropped to Serie D under a phoenix club – SSD Palermo, though they still wear their iconic pink jersey.

The rise and fall of Palermo – now owned by Hera Hora srl – is well documented but the heights of 2009-10 is something Federico Balzaretti remembers all too fondly.

Reflecting on the 10-year anniversary of Palermo's famous season, former full-back and Italy international Balzaretti told Stats Perform News: "I have many, many memories about that year because it was amazing. We were very close to the Champions League… The last home match to Sampdoria – the main match of the season. We were very close. The atmosphere in Palermo, the stadium, was amazing. Three hours before the match, the stadium was already full.

"It was amazing what happened in Palermo when we went back against Atalanta and we won [2-1]. It was full of fans waiting at the airport. It was a big, big festa for us. The team was very, very special. Special because the guys all together were amazing. Also because the quality of the team was very, very high. If you look at the stories about every one of us, you can see the career of Pastore, Cavani, me, [Mattia] Cassani, Sirigu, [Fabio] Simplicio, Nocerino, it was incredible.

"Another thing is that we expected so much from each other. We love each other so much. Even now, we have a group chat so we speak together and stay together and have dinner together when possible. It was something we built because the year before we were also close to qualifying for the Europa League. It was a very good cycle for Palermo."

Palermo – who were Coppa Italia runners-up the following season – were a force to be reckoned with in 2009-10, beating Italian giants Juventus and Milan home and away. It was a campaign which saw head coach Walter Zenga sacked in week 13 and replaced by Delio Rossi. The rest is history but what was the secret?

"The group," Balzaretti, who spent four years playing for Palermo before leaving for Roma in 2012, said. "The respect and the atmosphere you have in the locker room. This is the first thing because the mix was perfect. Italian players like me, Cassani, [Cesare] Bovo, [Fabio] Liverani with experience. Very simple guys. It was the experienced players with the mix of young players, talent, South American players because of Simplicio, Pastore, Cavani and Abel Hernandez and we always stay together. Every day and also after training we stay together. After every match we party together. It was a big family.

"With Walter Zenga, it was a very good atmosphere. The results were not bad, but you know our president [Maurizio Zamparini] was a little bit crazy about the trainer, so after two or three bad results, Delio Rossi came. He was very important for us because he was like a teacher. He explained everything at a tactical level – he was like a father for us. Also for the younger players, it was important for players like Pastore and Cavani. We improved a lot tactically and we prepared every match 100 per cent. We played against Juventus and Milan, we were sure to win. We won three years consecutive in Turin against Juve, it's not easy. We beat Milan, the huge Milan with Ronaldinho, Kaka and [Alessandro] Nesta. I remember in the second match against Milan, but after 20 minutes we were leading 2-0. It was very easy but it was natural because we play with our mind free, you have energy. It's not so easy to explain because there's some things you can't explain, it's in the air. I spent five years in Palermo and about the last years were so and so but the other four were top."

Miccoli scored a career-high 19 Serie A goals that season, while Cavani – who has gone on to play for Napoli and Paris Saint-Germain – contributed 13 of this own. As for Pastore, the Argentinean was the creative spark in midfield.

Uruguayan Cavani, though, soon departed – making the move permanently to Napoli in 2011. Pastore also said goodbye to Palermo that season, swapping the south of Italy for PSG in the French capital. Those sales, in some ways, were the beginning of the end for Palermo, who were relegated in 2013.

"The challenge of Palermo is to buy this kind of player [like Cavani and Pastore] – very young, develop the player and then sell," Balzaretti said. "I compare our Palermo with Atalanta. They reached the Champions League, now they are in the quarter-finals so they did better than us in terms of results but we were similar. It's very difficult to play for the championship but I think if this team could play together for more years, the possibility to reach the Champions League would have been very high, maybe sure. But the focus and goal of Palermo is not to reach the Champions League but to finish mid-table and sell the best player.

"If we stayed with Cavani, Pastore, Sirigu, [Mark] Bresciano, Nocerino, me, maybe yes to challenge or the possibility to reach the Champions League or Europa League every year was very possible. What the president wants, however, is not to arrive in the Champions League, to be stable. When I arrived at Palermo, we were better than Napoli. Better players, better results. But if you see Palermo and Napoli after 10 years, you can understand two different styles of strategy because the president of Napoli invests every year and keeps the best players. Palermo, unfortunately, the investment and management was not so good. Now, here we start in Serie D and win championship into Serie C but the strategy was so different. Ten years ago Napoli and Palermo were maybe the same, now it's different."

Palermo, who returned to Serie A in 2014 before dropping down to the second tier again in 2017, remain a unique club on the island of Sicily – separated from Italy by the narrow Strait of Messina – and close to Balzaretti's heart. Despite the pain and frustration of recent years, passion has not subsided with Palermo setting an attendance record this season on their way back from bankruptcy in Serie D.

Stadio Renzo Barbera welcomed 17,000 fans for their fixture against San Tommaso in September 2019. Palermo were seven points clear through 26 matches in Group I when the season was suspended due to the coronavirus pandemic in March as Rosario Pergolizzi's men now prepare for life in Serie C.

"The city is so special," Balzaretti, 38, continued. "The club was always very easy and direct because the president didn't live in Palermo, so he came sometimes before the match. But we had very good sport director in Walter Sabatini, he is like a second father for me because he was my director at Palermo and Roma.

"In the club, the people were very easy and very good. The feeling with the city was very special. It is one of the most important parts of this project because Palermo is a top city, the people are very generous and kind. You feel like you're at home. I lived in the north of Italy for 25 years, but I love the south. I love Palermo. I married a woman who was born in Palermo, so I have a very special family in Palermo. My wedding was in Palermo. An amazing relationship with the city.

"Also on the phone with other team-mates, we say we have to go to Palermo and stay there because it's something special. The people are very warm, they touch you and I need this, you feel like a star. That's great. In every bar you go, you hear and see Palermo. When you go to the stadium, it's full every match. Even this year in Serie D, they beat the record of attendance in Serie D. This is one of the factors that bring our team to the top at the moment. The fans are a very important part of football. Football without fans is not football."

Balzaretti, highlighting the renaissance of Parma and success of Monza through the divisions, added: "Next season in Serie C will be the most difficult season. You need to invest money. You can lose or beat anyone. Serie B and Serie A is a little bit easier to prepare. They deserve, the fans and city, to be in Serie A. They are missed a lot. I think it's possible in the next three, four years that they join Serie A. Parma were a similar story – a great story in the 1990s and then not good seasons. They failed and went to Serie D. Now they're playing very well in Serie A. This is a good challenge for Palermo, to follow the same path as Parma.

"I know the president at Palermo, he is very serious. The mentality is very good. The city deserves Palermo in Serie A but it's true, next season, many clubs in Serie C stay for many years. It's a difficult division. Then it's more easy to win Serie B and be more stable in Serie A. Serie C is not so easy but this is what they want. They need to invest – you look at Monza this season they invested a lot of money. Catania, three or four years in the same region in Sicily, they can't go up from Serie C. It's not the name that you win the league, but the team is more important than the name. I believe in the president. I know the general director because he was ours at the time, so I have a lot of confidence in these people."