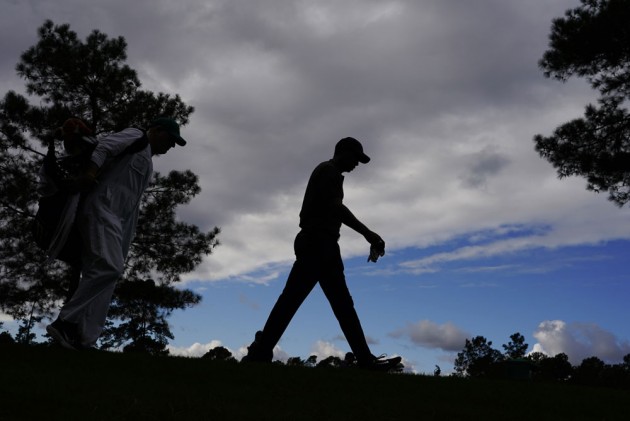 Paul Casey will carry a two-stroke lead into Friday at the Masters as Tiger Woods made an impressive start to his title defence at a rain-hit Augusta. (More Sports News)

Casey opened with a seven-under 65 in Georgia on Thursday, but the first round was initially delayed and then suspended for almost three hours due to inclement weather.

The Englishman, who was runner-up at the US PGA Championship earlier this year for his 10th top-10 finish at a major, produced a bogey-free round that included an eagle and five birdies.

Casey sat two strokes clear of American duo Webb Simpson and Xander Schauffele, who opened with 67s, and Justin Thomas – who was five under through 10 when play was suspended for the day due to darkness with 44 players yet to get through 18 holes.

Casey leaps into the lead following an eagle on No. 2. #themasters pic.twitter.com/6yxHZdyf8M

It continued Simpson's fine form, having finished in the top 20 in each of his past six starts on the PGA Tour.

But all eyes were on Woods, who started his title defence with a four-under 68.

Having sensationally won his 15th major at the Masters last year, Woods entered the tournament with just one top-10 finish in 2020 and that came at the Farmers Insurance Open in January.

However, the American – starting on the back nine – made three birdies in four holes from the 13th and picked up a shot at the first during a bogey-free first round.

Using the slopes. Tiger Woods birdies No. 16 to reach -3 at #themasters pic.twitter.com/TZlWyHTWg8

A five-time Masters winner, Woods' 68 tied his lowest first-round score at the tournament and was his first bogey-free round in a major since the 2009 US PGA Championship.

Woods' round left him in an eight-way tie for fifth, with Hideki Matsuyama, Lee Westwood, Louis Oosthuizen and Patrick Reed alongside him and having completed their rounds.

But Adam Scott (through 10), Matthew Wolff (through 11) and Dylan Frittelli (through nine) were all flying and at four under before play was suspended.

Scott, the 2013 Masters champion, made four birdies on the front nine.

World number one Dustin Johnson (through nine) and Jon Rahm (69) were among a group at three under alongside Rickie Fowler (through 11).

Top-ranked golfer in the world Dustin Johnson makes a smooth eagle on No. 2. #themasters pic.twitter.com/6thQmxQGXl

U.S. Open champion Bryson DeChambeau recovered from a double bogey at the 13th hole to post a two-under 70 and sit in a tie for 21st, a position he is joined in by Jason Day (70) among others.

Rory McIlroy struggled to get much going, reaching even par halfway through his round, while Brooks Koepka was two over through 10.

Jordan Spieth, the 2015 winner, showed no signs of turning his poor form around, opening with a 74.