Home  »  Website  »  Sports  »  The Firmino Fallacy - Is Brazil Star To Blame As Liverpool's Faltering Attack Face Up To Kane And Son?

The Firmino Fallacy - Is Brazil Star To Blame As Liverpool's Faltering Attack Face Up To Kane And Son?

Roberto Firmino has struggled for goals this season at Liverpool, but how much is he to blame for their overall drop off in attack? 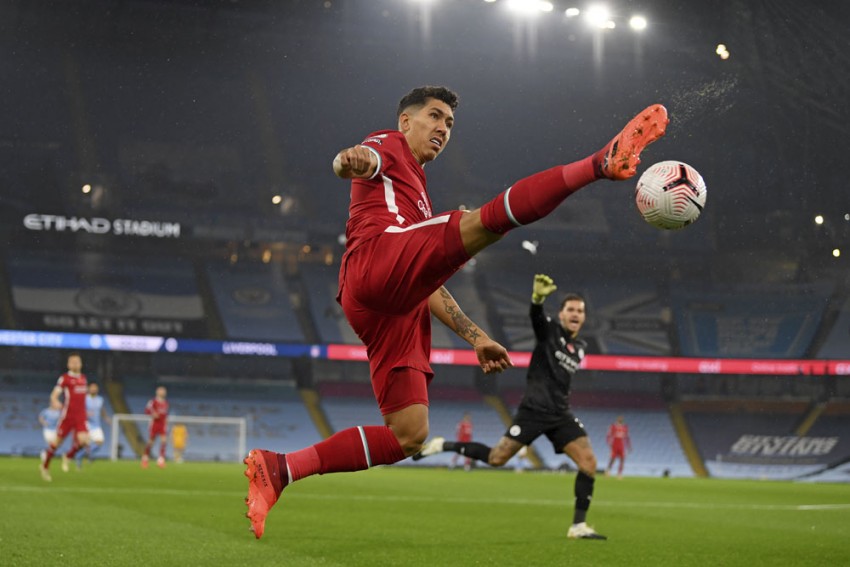 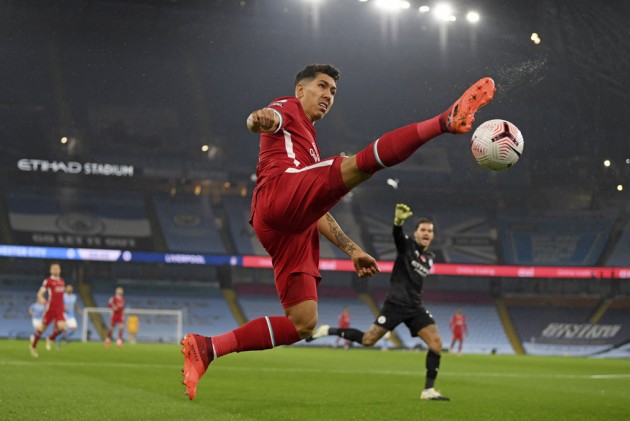 No one at Liverpool will ever rush to take comfort from any defeat to Manchester United. (More Football News)

But, amid the rubble of Sunday's 3-2 loss at Old Trafford in the fourth round of the FA Cup, there were signs the Premier League's most-celebrated frontline of recent times were clicking back into gear.

Mohamed Salah scored both Liverpool goals and will hope to end a top-flight drought stretching back to December's 7-0 shellacking of Crystal Palace when Tottenham host the defending champions on Thursday.

Perhaps more significantly, each of Salah's strikes were laid on by Roberto Firmino.

Aside from trying to work out who on earth will play at centre-back on any given week, it feels like Jurgen Klopp has spent more time on public defences of the Brazil centre-forward than anything else this season.

The Reds boss claimed he would be "embarrassed" to list all of Firmino's qualities and said "I can't help these people, sorry" when asked to explain the player's worth to the doubters.

Later in November he labelled Firmino "a complete footballer", not to mention a pretty impressive musician, who "plays something like 12 instruments in our orchestra".

However, since the symphonic grandeur of their display at Palace, Liverpool have not been able to move for bum notes in front of goal.

Firmino has not found the net in any competitive game since that trip to Selhurst Park, and former Anfield favourite Jamie Carragher singled him out after the 0-0 top-flight draw against United earlier this month.

"I'm still confident Sadio Mane and Salah will start scoring goals again," he said on Sky Sports' Monday Night Football. "I must say I am worried for Firmino."

Again, Klopp went in to bat for the former Hoffenheim man. But is it fair for the 29-year-old to repeatedly receive such scrutiny? Conversely, is Klopp motivated by anything more than loyalty to a diligent servant by this point? 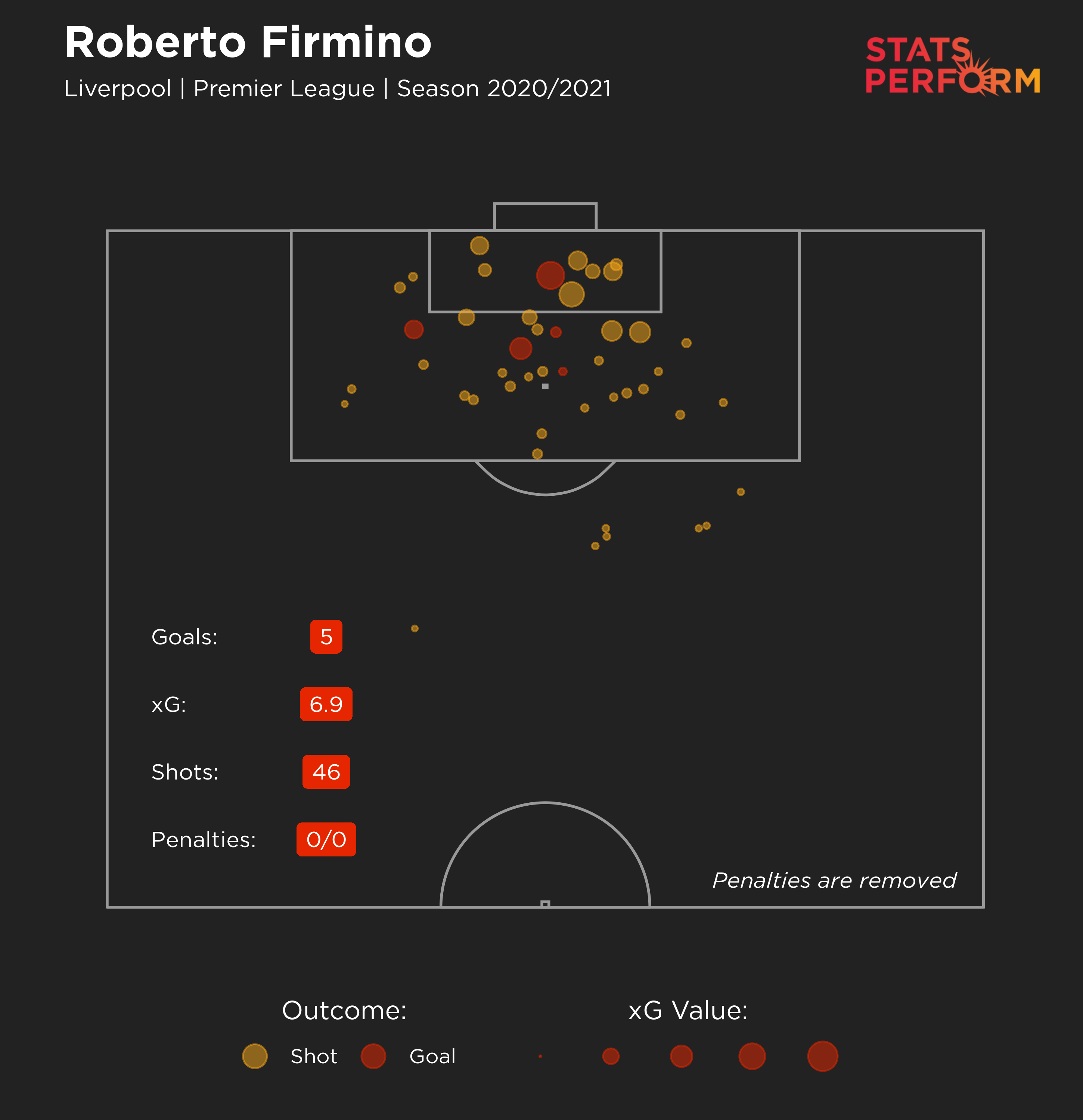 Firmino's five Premier League goals this season have come from 46 shots with an expected goals (xG) value of 6.9. He is yet to score in the Champions League.

Under-performing his xG is not exactly new territory for him. When widely hailed as a key member of a dominant title-winning team last season, his nine league goals from 99 shots came in well below an xG of 14.

When Spurs and Liverpool met at Anfield last month, Firmino netted a 90th-minute winner to snatch a 2-1 victory. These are the sort of "heavy goals" that will endear a player to a manager.

Since the start of the 2017-18 season, when the Salah-Mane-Firmino trident first came together, 16 of Firmino's 41 Premier League goals have been winners, or 39 per cent.

Mane (56) and Salah (86) have scored more often and netted more winners (17 and 26 respectively) but their percentage of decisive goals is slightly lower at 30.

Salah heads into Thursday's game as the Premier League's top scorer with 13 goals – one ahead of Spurs duo Harry Kane and Son Heung-min on 12 apiece – and 19 in all competitions.

Given goalscoring has never been hailed as Firmino's forte, perhaps it is Mane's drop off inside the penalty area that should be a greater cause for concern.

The Senegal international's six Premier League goals have arrived from 52 attempts with an xG value of 7.4. Amid a career-best run of form on the way to the title, Mane's 18 top-flight goals comfortably outstripped an xG of 13.7.

Diogo Jota's perceived importance to Liverpool has skyrocketed during his injury absence and the former Wolves man's nine goals across the Premier League and Champions League from an xG of 4.9 give him a solid argument to be picked ahead of either Mane or Firmino when fitness allows. 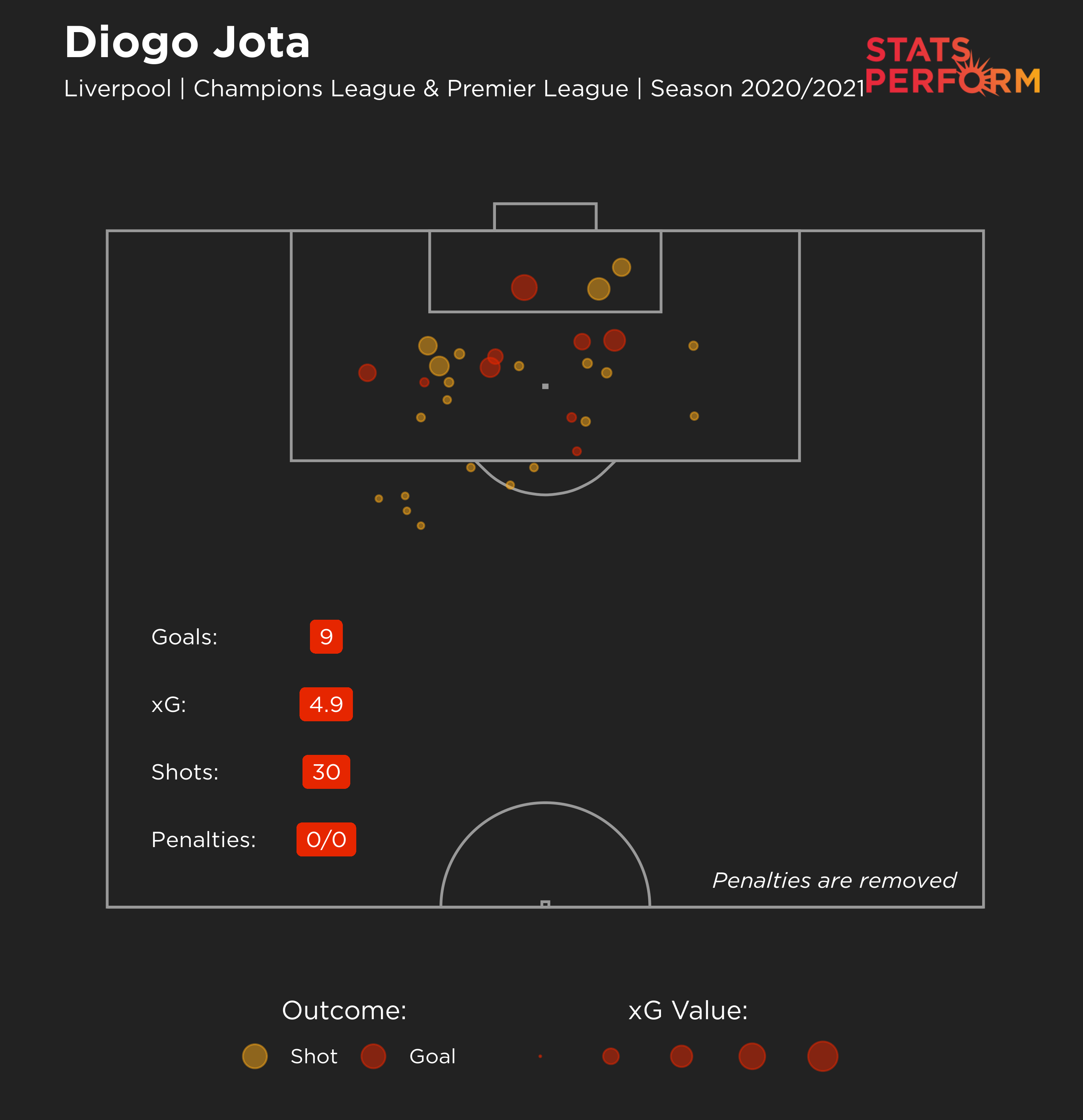 As mentioned above, Firmino showcased a key facet of his game at the weekend by laying on both Salah strikes and creating four chances overall – his most in a game this season.

He now has five assists in all competitions this term, set against four for Salah and three from Mane.

However, he has created notably fewer chances – 28 compared to Salah's 41 and Mane's 40.

Indeed, using Opta's expected assists (xA) metric, we can see that in the Premier League and Champions League combined, Firmino has created a lower quality of chances cumulatively.

The trio have three open play assists apiece in those competitions, although Salah's open play xA is four, with Mane's 2.9 and Firmino's 2.3.

Heavy metal football for the multi-instrumentalists

Outside of their goal involvements, the collective work rate of the Liverpool front three, their willingness to do the dirty work and set the tone for Klopp's gegenpressing machine has become a trademark.

However, in the context of a condensed Premier League schedule placing extra strain on players, this is not an especially alarming drop.

Liverpool's high turnovers per game are down to 8.9 from 10.7 last season, meaning they have swapped positions with Manchester City at the top of those rankings.

They remain second to City in terms of shot-ending high turnovers. Pep Guardiola's team have managed to maintain their level in this regard, averaging 2.2 high turnovers per game compared to 2.1 in 2019-20. Liverpool's per 90 drop is from 1.7 to 1.3.

Regarding pressed sequences per game, Klopp's men are holding steady as the best team in the league – 17.5 compared to 18.1 from the season gone.

They are also allowing slightly fewer passes per defensive action (PPDA) in the Premier League, with 10.1 in 2020-21 compared to 10.3. On this metric, possibly due to poor early-season form and some atypically cautious performances that followed, City have dropped from 10.1 to 11.4. 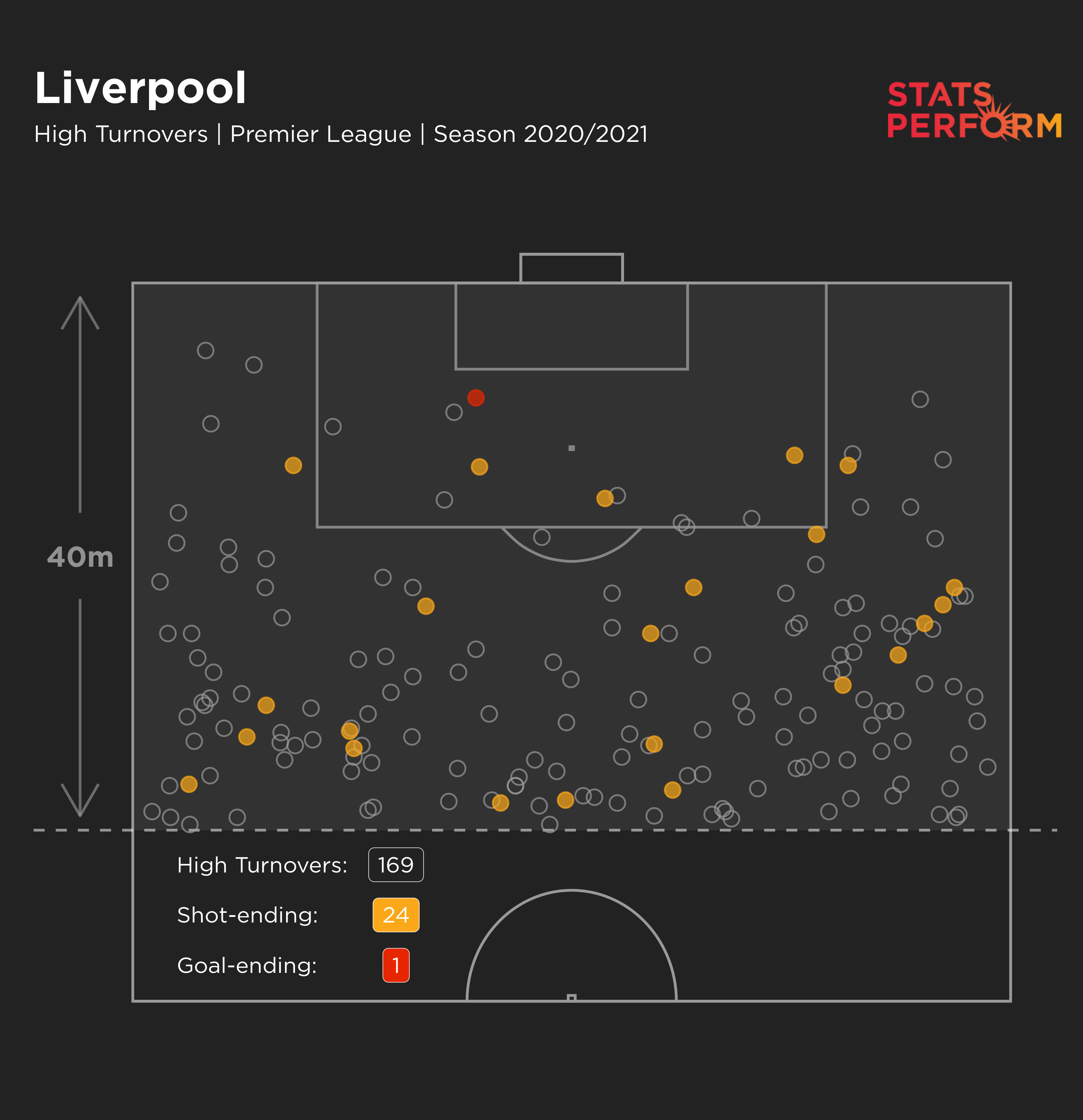 Of course, the Liverpool front three's work off the ball would not be so notable without them doing the business once it's at their feet.

Looking a little deeper than goals and assists data, Salah and Mane ranked in the Premier League's top 10 when it comes to involvement in open play sequences ending in a shot before the start of this midweek round.

Firmino came in 11th with 89 involvements, behind Mane on 100 (sixth) and Salah with 102 (fifth). Of those sequences to yield goals, Salah has featured in 12, compared to nine and six for Mane and Firmino respectively.

The Brazilian has suffered from some poor finishing at the end of his involvements. The cumulative xG for the sequences he played a part in is 12.3, slightly better than Mane (11.6) and Salah (10.8).

An Opta metric where Firmino certainly lives up to his reputation is the seven times he has started a period of possession that ended in a shot this term. That puts him joint seventh in the Premier League overall as the highest ranked striker in a category where Rodri, Pierre-Emile Hojbjerg and N'Golo Kante are among the high flyers – defensive midfielders whose primary role is winning the ball back to get their teams on the front foot.

The pain of Kane - the perfect hybrid

The temptation before Thursday might be to point towards Kane as the centre-forward Liverpool would love Firmino to be. The England captain's incredible alliance with Son demonstrates being a scorer or a provider is not an either/or equation.

Kane has 12 Premier League goals and has laid on 11 more. Firmino's best assist tally over the course of an entire top-flight season was eight en route to glory last time around.

Unflattering comparisons are easy to reach for but, as the numbers above demonstrate, Firmino and Liverpool's front three as a collective have not fallen too dramatically from the performance levels that made them the most feared attack in Europe.

Virgil van Dijk's injury, influential midfielders being deployed in defence in his absence and the knock-on in terms of both midfield balance and the effectiveness of attacking full-backs Trent Alexander-Arnold and Andy Robertson look like more plausible explanations for Liverpool's malaise.

Even so, a fifth goal against Tottenham and a third consecutive winner in this fixture would be the best way to stop Klopp making another weary argument in Firmino's favour.