The Ashes 2019: Mandatory Neck Guards 'Not Far Away' After Steve Smith Felled by Jofra Archer

Australia were without Steve Smith on the final day of the second Ashes Test after their talismanic batsman was ruled out with concussion. Smith was struck on the neck by a fierce delivery from Jofra Archer on Day 4. 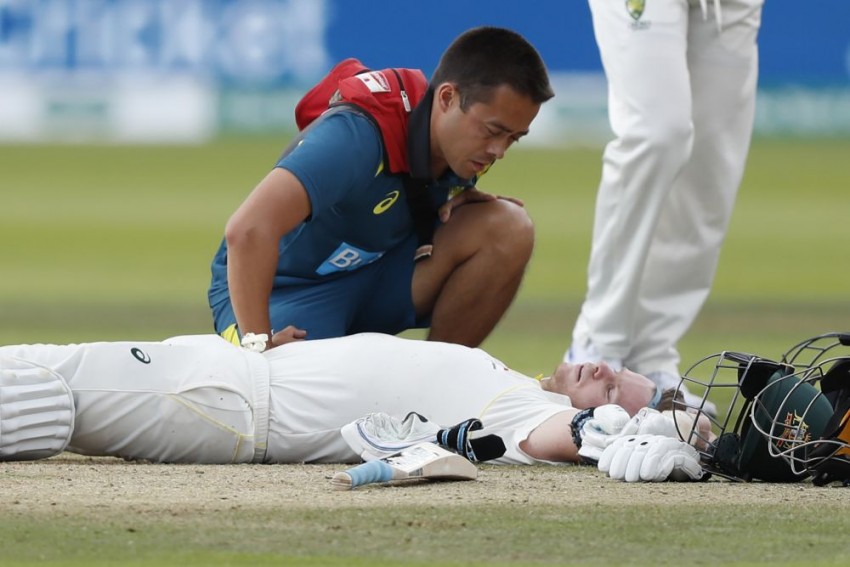 Steve Smith was substituted in the Lord's Test after suffering a concussion.
AP
Outlook Web Bureau August 19, 2019 00:00 IST The Ashes 2019: Mandatory Neck Guards 'Not Far Away' After Steve Smith Felled by Jofra Archer 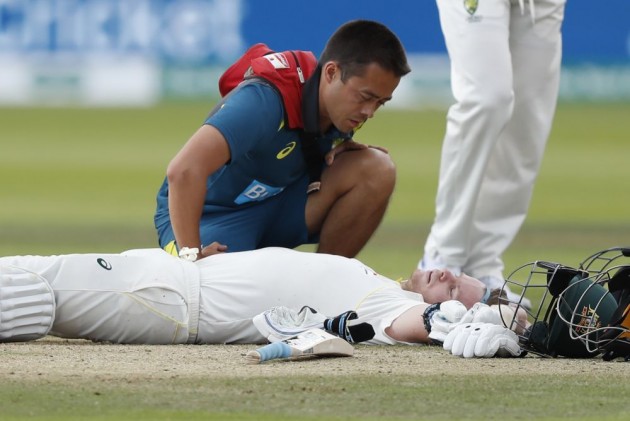 Compulsory neck guards on helmets for Australian cricketers are "not far away", the national team's medical chief said Monday after a sickening blow felled Steve Smith during the second Ashes Test at Lord's. (HIGHLIGHTS | SCORECARD)

Australia have been at the forefront of pressing for better safety measures after the death of Phillip Hughes, who was hit on the base of the skull by a bouncer in a Sheffield Shield game in 2014.

ALSO READ: Archer Has Shaken Up The Ashes, Says Root

These have now been adopted by the International Cricket Council and were used for the first time when Smith was replaced by Marnus Labuschagne on Sunday against England at Lord's after medics ruled him unfit to carry on.

The inquest into Hughes' death also recommended first-class players in Australia wear helmets made to British safety standards while batting against medium pace or fast bowling.

That included the use of specially designed neck guards, known as StemGuards.

But they are not compulsory and Smith, who collapsed to the ground face first after the vicious ball from Jofra Archer smacked into the side of his neck, in scenes reminiscent of the Hughes incident, was not wearing one.

He said afterwards they made him claustrophobic and uncomfortable.

Cricket Australia's sports science and sports medicine chief Alex Kountouris said it was only a matter of time before they became mandatory, revealing the International Cricket Council, Cricket Australia, the England and Wales Cricket Board, and helmet manufacturers recently completed a major review.

"Helmet manufacturers did the right thing and came out with products (after Hughes' death). There was no real knowledge of the mechanism, what exactly they were trying to protect or stuff like that," Kountouris told the Sydney Morning Herald.

"But since that time we have done a lot of research. We actually have a pretty good understanding of that now." Now there was agreement on what the standard should look like, including the size and area that needs to be covered and the force properties it should have.

Kountouris said it would take about six months for manufacturers to complete the upgraded product, which then would be trialled by players.

"When we get to that point, I think we'll be comfortable to say: 'Let's make it a requirement'. There is still a little time to go but we are not far away."

Peter Brukner, the former doctor of the Australian team from 2012-2017, said he was astonished that some top players still don't wear neck guards.

"I think it should be (mandatory)," he told The Australian newspaper.

Smith, by far Australia's best bastman, is now facing a race against the clock to be passed fit for the third Test at Headingley later this week.

While Australia captain Tim Paine said it would be "tough to stop Smithy walking out" for the match, the decision is ultimately up to team doctor Richard Saw.

Kountouris said at a press conference Monday he was "100 percent happy" with how Saw had handled the situation so far.

"Our doctor is an expert in his field, he's trained to pick up even the minor signs of concussion," he said. "Everything he did was according to the protocol, he was very thorough."