Sergio Aguero might have found a novel way to miss on Saturday, but Manchester City's penalty woes are certainly nothing new 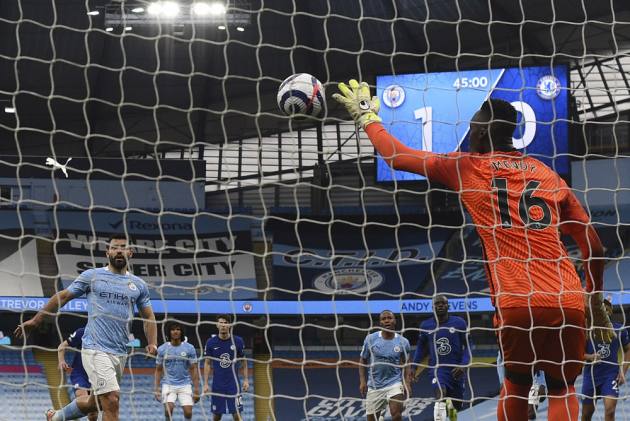 Manchester City's wait for a third Premier League title in four years went on after they suffered a 2-1 defeat against Chelsea at the weekend. (More Football News)

Pep Guardiola's side do have an unwanted statistic to their name in that ratio, however, having now lost three of their past four league outings at the Etihad Stadium.

Another trend to continue was Manchester United falling behind before beating Aston Villa 3-1.

As the season reaches its final stretch, players will be well aware it's a marathon not a sprint. Indeed, one of the division's most noted pace merchants has proved again he is adept at lasting the course.

Using Opta data, we take a look at these talking points from the most recent round of Premier League fixtures.

10 - Manchester United have won 10 @premierleague matches after conceding first this season, a record by a team in a single season in the competition's history. Character. pic.twitter.com/e5SHicjX0O

Sergio Aguero knows a thing or two about scoring the goal to clinch a Premier League title, so City probably felt they had the perfect man standing over Saturday's penalty against Chelsea, with Guardiola's much-changed side 1-0 up thanks to Raheem Sterling.

But Aguero's awful chipped effort gave Edouard Mendy chance to go to ground, stand up again and catch the ball – a moment of complete embarrassment for the Premier League's all-time leading overseas goalscorer.

None of the misses have been quite as, well, hilarious as the one Aguero conjured up, but he joins Kevin De Bruyne, Ilkay Gundogan and Sterling in having failed from 12 yards this season.

These are not new problems, with those misses making City the first team since Tottenham in 1993-94 and 1994-95 to fail from four or more penalties in consecutive seasons.

Overall, City have missed 32 of 130 Premier League penalties, with Spurs (33), Liverpool, Aston Villa (both 34), Arsenal (36) and Manchester United (40) the only teams more profligate.

We look at the key penalty stats for @OptaAnalyst

When wing-back Marcos Alonso scuffed home Chelsea's winner at the Etihad Stadium, the inclination was to celebrate an "unlikely hero". However, the Spain international is no stranger to the scoresheet.

Alonso has now netted 24 goals for the Blues – the same number as Alvaro Morata and Daniel Sturridge and three more than Andriy Shevchenko.

In the Premier League era, only John Terry (61), Branislav Ivanovic (34) and Gary Cahill (25) have scored more often as Chelsea defenders.

Among his current team-mates, strikers Olivier Giroud and Tammy Abraham, with 39 and 30 respectively, are the only players with more goals for the club.

It is not beyond the realms of possibility that the forthcoming transfer window sees Alonso go into next season as Chelsea's leading club scorer.

2010 - At 91m 54s, Marcos Alonso's winner was the latest winning goal scored in an away Premier League game against Manchester City since Paul Scholes for Man Utd in April 2010 (92:41). Scenes. #MCICHE pic.twitter.com/5mQjHkG5qc

When Bertrand Traore put them ahead on Sunday, Villa might have been forgiven for fearing the worst.

Sure enough, Mason Greenwood and Edinson Cavani were on target after Bruno Fernandes equalised from the penalty spot.

Ole Gunnar Solskjaer's side now have 31 points from losing positions, bettering their previous best of 29 in 2012-13, when Alex Ferguson rounded off his celebrated tenure with one last title success.

In their four remaining games this term, United could overhaul the Premier League record of 34 points gained after falling behind, set by Bobby Robson's Newcastle United in 2001-02. Their 10 wins after conceding first in 2020-21 is already a competition best.

The Red Devils also claimed 24 points after going behind in 1999-00, when they retained the title. Arsenal emulated that feat in the same season, also doing so in 2011-12.

The equivalent of eight wins from behind has also been achieved by Everton in 2002-03 and Tottenham in 2010-11, the same campaign when West Brom turned deficits into 27 points.

28 - 28/31 points that Manchester United have won from losing positions this season have come away from home. This is nearly three times any other club in 2020-21 & 11 more than any side in a previous PL season. Mad.

Game of two halves for Traore

Coming from behind to win obviously requires a certain level of collective improvement throughout games. Individually, Adama Traore certainly seems to warm to his task as matches progress.

That was his seventh career goal in the Premier League – all of which have been scored in the second half.