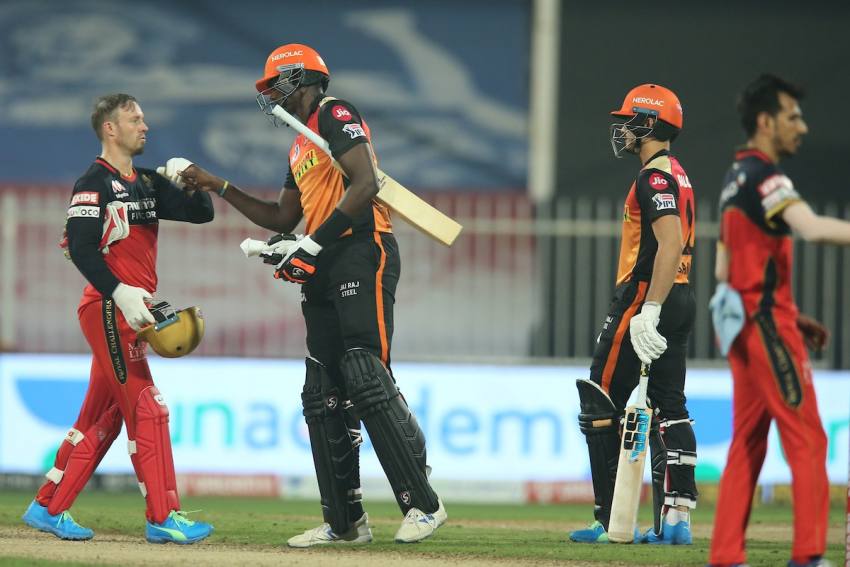 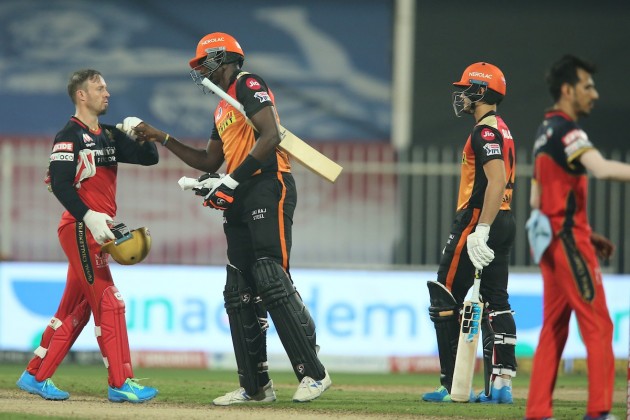 With six teams vying for three spots in the IPL playoffs, Saturday's Royal Challengers Bangalore vs Sunrisers Hyderabad match will be must-win for both teams. Royal Challengers Bangalore, currently No. 2 in the IPL 2020 standings with 14 points from 12 matches, need just two points from their remaining two matches to seal a berth in the IPL playoffs. Virat Kohli's RCB face a rejuvenated Sunrisers Hyderabad in Sharjah on Saturday evening. David Warner's SRH are coming off  a big morale-boosting win against Delhi Capitals and can upset all calculations. SRH have 10 points from 12 matches. (POINTS TABLE | FIXTURES & RESULTS)

10:34 PM IST: Holder hammers a SIX!!! of Udana, much needed for SRH . An attempted bouncer Holder having none of it dispatches it over long-on

10:29 PM IST: Sundar bowls economical over SRH under some pressure although they need 34 in 48 and should be favourite

10:24 PM IST: WICKET!!!! Chahal stumps Saha. A sudden twist. Saha jumps misses the line and AB was quick to remove the bails; Chahal is bowling RCB back into the match; Saha started well managing a FOUR!!! over midwicket; End of 11th SRH are wobbling

10:17 PM IST: Udana into the attack and Saha welcomes him with a FOUR!!!! full toss driven through covers; ball changed and may be it will grip better now. SRH

10:12 PM IST: Chahal almost runs out Kane. Saha drives straight but Chahal gets finger tips to it and ball crashes on to the stumps. But 3rd umpires gives it Not Out; Chahal was excited but Kane survives; Just 3 runs from the over

10:06 PM IST: Udana bowls a fine over just 4 runs of the over as SRH feel pressure Kane Williamson plays watchfully,

9:55 PM IST: WICKET!!! Chahal into the attack utmost respect for the spinner for the first two balls; Pandey tries to hammers the next one for a six. Playing against the turn, only find Morris at mid-on; SRH 60/2, Need 61 in 78 balls

9: 52 PM IST: Siraj into the attack; Saha lofts him over the mid-on for FOUR!!! taking advantage of fielding restrictions; 4th ball Saha makes room Siraj follows him and its quick and rising; Saha hits the next one out of park SIX!!!!! hooks it for maximum

9:44 PM IST: Morris back into the attack, driven straight for FOUR!!!! flicks it over midwicket; SRH are now getting into the groove and settling in for the chase. Morris is getting it all wrong 3 wides in the over already; SRH will be happy no pressure as 5th over gives them 15 runs; A flick by Pandey gets them last ball FOUR!!!

9:39 PM IST: Sundar into the attack and this time it's Saha's turn to post a boundary. Saha on his knee sweeps powerfully, Pandey at the other end is looking in good touch. 9 runs of the over

9:35 PM IST: Saini into the attack Manish Pandey just walks out of the crease and hammers it past mid-on for  a FOUR!!!, A ball later Pandey pulls Saini  for a SIX!!!!! over square leg; Saini is under pressure. Bowls well the next two balls inside edge and last ball beats Saha

9:28 PM IST:   Sundar into the attack and Gets a wicket!!!! Warner had hammered a six of the previous ball tries to hit the next one also out of the park find Udana at mid-on; Huge wicket for RCB but they will need a few more, Manish Pandey next man in

9:22 PM IST:   Chris Morris into the attack, SRH start with Saha and Warner; RCB need good bowling and .wickets to defend this total. Morris bowls good over just 4 runs from it

9:04 PM IST: RCB have set a target of 121 for SRH to Chase, SRH bowlers have done well to restrict RCB. Strikes by Sandeep, Rashid and Holder and some brilliant fielding means SRH are favourites

8:58 PM IST: WICKET!!! Jason Holder gets another one Udana c Willamson b Holder 0  RCB innings is faltering in quick succesion;

SRH will be happy with the effort; He was dropped of the previous ball; But this time Warner makes no mistake

8:49 PM IST: Over to Sandeep into his last over of the day; Mann will be comfortable with him, Both play for Punjab, Sundar too muct have faced him in domestic cricket; Sandy though is willy customer gives away just 7 runs

8:44 PM IST: Last over for Rashid Khan. Spinner on top of his bowling both the batsmen finding it hard to read the spinner; Khan is attacking . Rashid lofts the 5th ball just a bit more and Sundar is quick to pounce a welcome FOUR!!! ; Dropped by Pandey of the next ball Sundar survives

8:28 PM IST: End of 13th Nadeem bowls a fine over gives away 7 runs and RCB are now struggling to score

8:23 PM IST: WICKET!!! No 4; Rashid Khan gets Josh Phillippe spin striking for SRH. trying to hit a SIX, find Manish Pandey at deep midwicket; Pulling RCB back 5 of the over; RCB are looking in trouble Washington Sundar and Gurkeerat Mann in middle for Bangalore

8:20 PM IST:  WICKET!!!! Nadeem Gets AB de Villers. The spinner was getting a hammering from AB, looks like AB had picked his bowler to target; SIX!!!! second ball disappears out of the park. But Nadeem has last laugh; AB tries to hit the next flat out of the park but finds Abhishek Sharma at deep point

8:16 PM IST: End of 10th Rashid Khan into the attack SRH need a big performance from him and Khan has been doing great not giving away any width and bowling to the field. Something will give AB can't be bogged down for long; AB hits a FOUR ; Short and stands up AB hammers it through midwicket;  9 runs from it

8:11 PM IST:  Nadeem now into the attack AB knows he needs to attack T20 doesn't give much time for batsmen to settle; AB makes room and smashes Nadeem for a FOUR!!!! through long-on, 10 runs of the over TIME OUT!!

8:07 PM IST: End of 8th Rashid Khan ideal time for him RCB are under pressure and what an over; almost deceives Ab twice. A wide and 2 runs of the last ball means RCB have taken just 3 runs from the over

7:58 PM IST: End of 7th Nadeem bowls  gives away a FOUR of the 4th ball, SRH won't mind that because they are attacking ; almost had de Villers caught and bowled but ball pops out of hand; Rashid into the attack

7:58 PM IST: End of 6th Natrajan into the attack gives away just 1 run

7:51 PM IST: WICKET!!!! Sandeep back into the attack; Saha stands up to the stumps Sandy is not that fast but gets Big wicket VIRAT KOHLI c Williamson b Sandeep 7 (7b) at extra cover; 7th time Sandy has picked Kohli

7:48 PM IST: End of 4th Holder to Virat Kohli who has hit the ground running looking for singles. Holder will be happy with singles till the time no boundary is given; but Josh slaps one over mid-off for a FOUR!!!! 11 runs of the over

7: 43 PM IST: WICKET!!!!! RCB jolted in-form Padikkal out,  swings back in;Sandeep almost had a wicket of the first ball. Phillippe decieved by a knuckle ball, batsman was early on to the shot. but doesn't carries to bowler;

7:37 PM IST: Jason Holder into the attack bowls a good line but it's Devdutt Padikkal who gets the first FOUR!!! of the match. The Southpaw has grown in confidence and just drives it to boundary  through mid-off

7:29 PM IST: David Warner leads SRH on to the field.  RCB to start with Devdutt Padikkal and Josh Phillippe; Sandeep Sharma with the ball in hand for SRH