Real Madrid Vs Sevilla, Live Streaming: When And Where To Watch La Liga Match 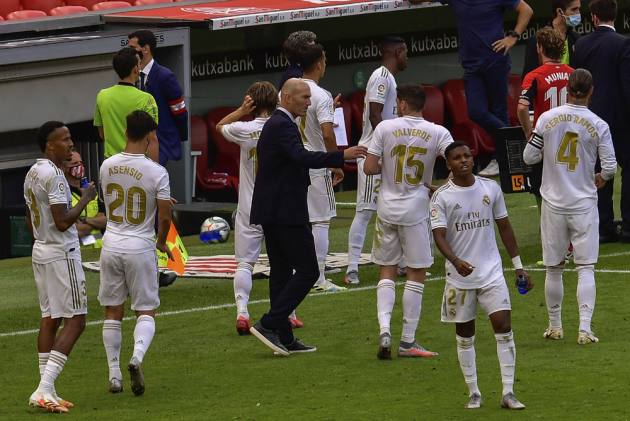 Atleti Madrid's 0-0 draw with fellow title hopefuls Barcelona on Saturday opened the door for Rea Madrid, who can usurp their neighbours at the top of La Liga table with victory in their game in hand, against Sevilla. A win would lift them level on points, but they would be first courtesy of their superior head-to-head record this season. (More Football News)

Zinedine Zidane's Madrid have won the past four La Liga meetings between the sides and are unbeaten in 11 at home to Sevilla, scoring 3.4 goals per game on average. It is their longest ever stretch of consecutive home league victories against the Andalusian outfit. But Los Blancos must move on from a disappointing result in midweek when they exited the Champions League to Chelsea.

For Sevilla, it's yet another opportunity to join the big three as Julen Lopetegui continues to build a strong domestic campaign. A win over the reigning champions and they will be only four points behind leaders Atleti. In the reverse fixture, an own goal from Sevilla goalkeeper Bono handed the visitors a 0-1 win in Seville.

Madrid will again have to contend without captain Sergio Ramos, who has suffered a hamstring injury – his third setback of the season. But Ramos had already missed three of Madrid's previous games against top-four opposition this term and they are unbeaten in all five such matches, winning four.

Zidane will be able to call on Eden Hazard, though, after the winger apologised having been pictured joking with his former Chelsea team-mates following this week's defeat. The Belgian has just three goals in 27 La Liga appearances over the past two seasons and none since January. He has created only 26 chances for four assists and much more is expected from the €100million signing.

Sevilla have no major injury crisis. Joris Gnagnon and Munir El Haddadi are the only two players missing out of the trip to the capital.