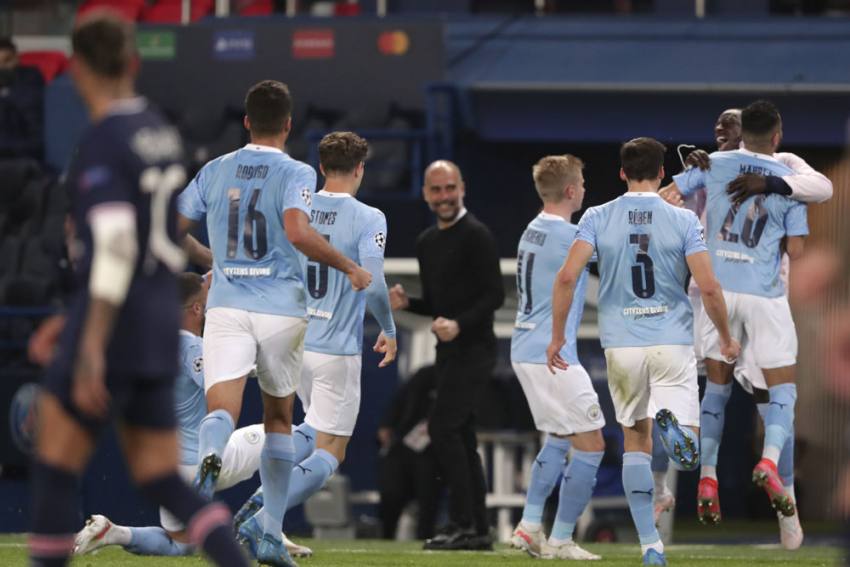 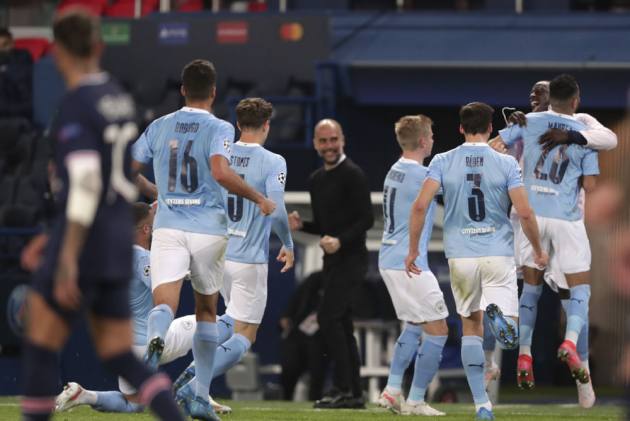 A pulsating contest at the Parc des Princes saw PSG take a 15th minute lead when captain Marquinhos – returning to action from a groin injury – headed in at a corner.

However, having been second best during the first half, City were vastly improved after the break, an equaliser arriving when De Bruyne's curling delivery into the penalty area drifted beyond everybody to find the net.

An 18th straight away triumph for Pep Guardiola's side was secured courtesy of a Mahrez free-kick that found a gap in the wall and, having lost control of the game, PSG then lost their cool in the closing stages, Idrissa Gueye shown a straight red for a dangerous challenge on Ilkay Gundogan.

47 - In the history of the European Cup/UEFA Champions League, there have been 47 instances before tonight of an English side winning the first leg of a two-legged knockout tie away from home, and on all 47 occasions the English side has progressed. Legwork. #UCL pic.twitter.com/QtWjT41QK8

There had been little sign of the drama to come at half-time. The hosts were deservedly ahead after Marquinhos – who had not played since scoring in a 3-2 win over Bayern Munich in the quarter-final first leg – had flicked in a deliciously whipped-in delivery from Angel Di Maria.

City's best chance to equalise before the break came when the hosts gifted them possession, but Phil Foden was only able to shoot straight at Keylor Navas when afforded a clear sight of the target.

Yet Pep Guardiola's side penned PSG in to change the complexion of the tie completely. They had a 65.1 per cent share of possession after the interval, leading to them getting two crucial away goals ahead of the return fixture next week.

De Bruyne appeared to be aiming for a team-mate but ended up scoring himself, though there was no doubt Mahrez meant his strike, PSG crumbling under pressure.

While there is still work to do back in Manchester, a first-ever Champions League final appearance for the club is within City's grasp thanks to an unforgettable night in Paris.

What does it mean? Anyone for a treble?

City secured their first piece of silverware in the 2020-21 season on Sunday by beating Tottenham in the EFL Cup final. The Premier League crown will soon follow, but Europe has been a step too far for Guardiola during his hugely successful reign.

History is now on their side, though. There have been 47 instances previous instances of an English side winning the first leg of a two-legged knockout tie on the road – and on every occasion they have gone on to progress.

Mauricio Pochettino was in charge of the Spurs team that rallied to stun Ajax in Amsterdam and reach the 2019 final, but Istanbul looks a million miles away for his current employers after this setback.

We need to talk about Kevin

De Bruyne became the fourth player to reach double figures for Champions League goals for City, joining a select group that includes team-mates Sergio Aguero (36), Raheem Sterling (21) and Gabriel Jesus (16). It was "lucky", as he admitted afterwards, but no more than his team deserved for their improved efforts.

Gueye was rightly dismissed for a lunge on Gundogan that was both late and dangerous, making him the first player to be sent off twice in a single Champions League campaign since Alvaro Arbeloa in 2012-13. In the end, PSG were grateful to not lose by more, having managed just one attempt in the second half.

- PSG suffered defeat when leading at half-time in the Champions League for the first time since March 2001 against Deportivo La Coruna.

- De Bruyne has been directly involved in nine goals in his last eight Champions League appearances in the knockout stage (5 goals, 4 assists).

- Di Maria is the only player to register double figures for assists in the Champions League (10). Since his debut season in 2007-08, only Lionel Messi and Cristiano Ronaldo (34 each) have more assists than Di Maria (31).

PSG continue their quest for a 10th league title when they welcome Lens to the French capital on Saturday, while City – who could be confirmed as top-flight champions by the time they host the return fixture – travel to Crystal Palace on the same day.