Mbappe made history as Paris Saint-Germain booked their place in the Champions League last eight with a 1-1 draw against Barcelona. 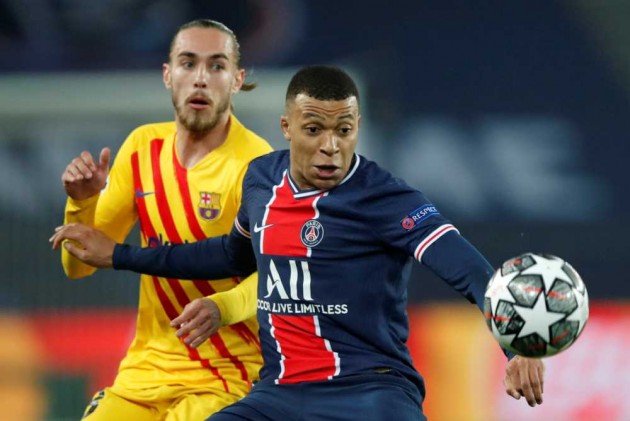 Kylian Mbappe made history as Paris Saint-Germain booked their place in the Champions League last eight with a 1-1 draw against Barcelona at the Parc des Princes on Wednesday.

Mbappe plundered a stunning hat-trick to help Mauricio Pochettino's side to a 4-1 first-leg win at Camp Nou last month and the World Cup winner opened the scoring in Paris, whipping home from the penalty spot shortly after the half-hour mark.

That goal saw him overtake Lionel Messi as the youngest player to reach 25 goals in the competition, aged 22 years and 80 days, but the Barca talisman had his say soon after, thundering home a glorious equaliser from outside the area.

Barca's hopes of becoming the first side in Champions League history to progress from a knockout tie after losing the first leg at home by a margin of three goals evaporated before the interval when Navas kept out Messi's penalty, PSG seeing out the second half with the minimum of fuss to seal a 5-2 aggregate triumph.

We progress into the quarter finals of the @ChampionsLeague #UCL | #PSGFCB pic.twitter.com/rqWRniII37

Ousmane Dembele was guilty of squandering a number of fine opportunities inside the opening 20 minutes as Barca started on the front foot.

Keylor Navas tipped Sergino Dest's powerful drive onto the crossbar before Mbappe gave the hosts an undeserved lead after 31 minutes, the France international powering home from the spot after Clement Lenglet had tripped Mauro Icardi.

However, Messi pulled Barca level soon after with a stunning 25-yard strike into Navas' top-right corner – only Cristiano Ronaldo (20) has scored more Champions League goals from outside the area than the Argentinian's 19.

Messi should have added a second before half-time after Layvin Kurzawa had fouled Antoine Griezmann in the area, but Navas repelled his spot-kick – his first miss from 12 yards in the competition since February 2015.

A superb tackle from Marquinhos prevented Messi scoring from close range shortly after the hour mark, while Navas kept out Sergio Busquets' header at his near post.

Mbappe blazed over after a surging run in the closing stages, but it mattered little in the end as last year's beaten finalists booked their place in the quarter-finals in style.

What does it mean? Wasteful finishing denies Barca a memorable result

Few people gave Barca any chance of progressing to the quarter-finals after their dismal showing in the first leg, but had Messi converted his penalty and Dembele showed an iota of ruthlessness they could well have pulled off a remarkable comeback.

They had 72.2 per cent possession and took 21 shots to PSG's seven in what was one of their best displays of the season. Ronald Koeman will rue this as a massive missed opportunity, while Pochettino will have breathed a huge sigh of relief as PSG exorcised the demons of 2017 when they were knocked out after a 6-1 second-leg collapse at Camp Nou.

Marvellous Messi in the thick of things

If this was to be Messi's last Champions League game for Barca, he certainly left his mark. His superb equaliser - one of a game-high seven shots - will live long in the memory, while he also played three key passes to his team-mates. That missed penalty will prove a huge source of frustration, though.

Dembele had four shots in the first half and should have scored with at least two of them. His insipid display was characterised by a pass completion rate of 65.5 per cent - the lowest of any outfield player.

PSG are in Ligue 1 action on Sunday when Nantes visit the Parc des Princes, while Barca host Huesca in LaLiga a day later.