Borussia Dortmund were grateful for Jadon Sancho's return to full fitness as they defeated strugglers Paderborn. 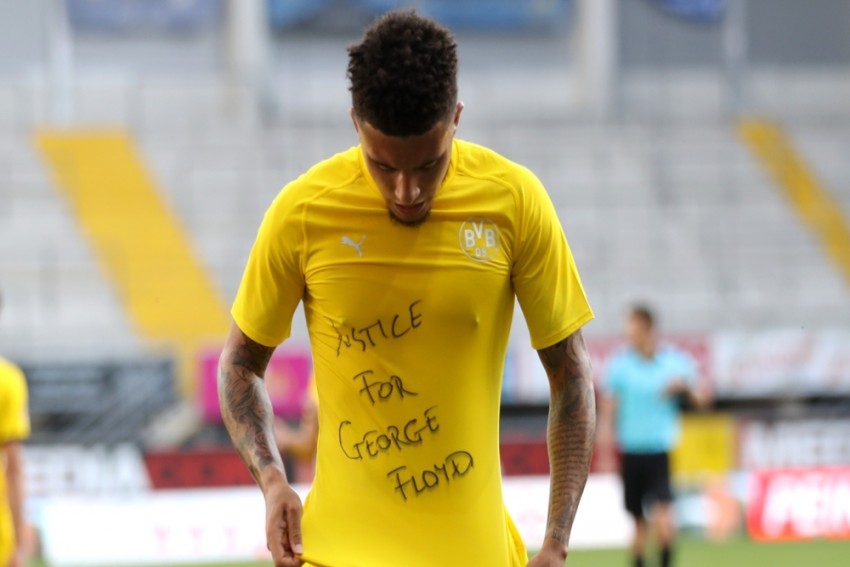 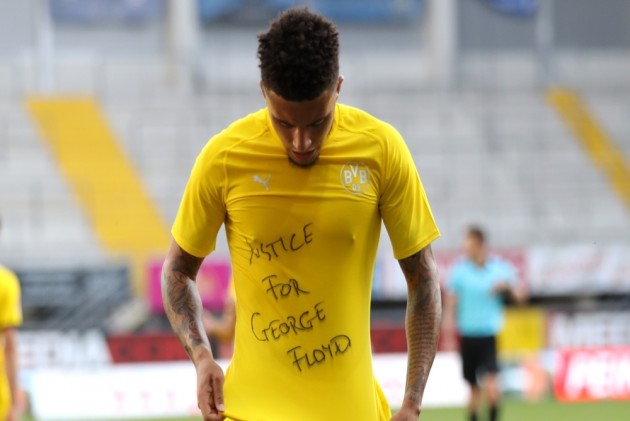 Jadon Sancho marked his return to the Borussia Dortmund XI with a hat-trick and a political message as they thumped Bundesliga strugglers Paderborn 6-1 on Sunday.

Sancho was restored to the line-up for the first time since the coronavirus-enforced break after a disappointing midweek defeat to Bayern Munich saw the defending champions move seven points clear at the summit.

That reverse prompted fresh speculation regarding head coach Lucien Favre's future, but Sancho helped his second-placed side get back on track as they look to secure Champions League qualification.

Although Dortmund were frustrated until the 54th minute at the Benteler-Arena, Thorgan Hazard's opener was swiftly followed by a second from Sancho, who would later net again after Uwe Hunemeier brought Paderborn back into the contest, with Achraf Hakimi and Marcel Schmelzer adding gloss to the scoreline.

The England international rounded off his treble in the 92nd minute by capping a rapid Dortmund counter-attack.

Sancho celebrated his first by revealing a T-shirt bearing the message "Justice for George Floyd" in reference to the black American who died in an incident involving a police officer in Minnesota this week, prompting protests across the United States.

Bundesliga colleagues Weston McKennie and Marcus Thuram had similar tributes earlier in a weekend that concluded with Dortmund's return to winning ways.

Favre's men had been given a scare by Paderborn in November when the minnows raced into a 3-0 first-half lead in a 3-3 draw at Signal Iduna Park, but the best of the opportunities fell BVB's way from the outset this time around.

Hazard was twice kept at bay by Leopold Zingerle, and Raphael Guerreiro's low strike deflected wide, with further opportunities following the interval as the goalkeeper denied Hakimi and then Hazard hit the post.

The breakthrough finally came courtesy of an unfortunate Zingerle blunder, with the keeper unable to hold Emre Can's ball from the left and presenting Hazard with a tap-in.

Dortmund wasted no time in adding another, with Julian Brandt racing through and squaring for Sancho, although they were briefly made to work for their win.

Dennis Srbeny quickly had a riposte disallowed for offside, before Paderborn got their goal through Hunemeier from the penalty spot after Can was punished for handball, his elbow spotted where Jerome Boateng's for Bayern on Tuesday had not been.

It mattered not as Sancho rifled a crucial strike inside the right-hand post from Hazard's pass with 16 minutes left, before Hakimi shot across Zingerle and then Schmelzer - having assisted the wing-back - turned in Axel Witsel's cross.

The day belonged to Sancho, though, and he raced away on the counter in stoppage time to coolly beat Zingerle and complete his treble.

What does it mean? BVB back on track

It appeared for close to an hour as though Dortmund were suffering with a hangover from their painful midweek reverse. Favre's side dominated possession but struggled to break down a resolute defence.

Quickfire goals from Hazard and Sancho settled the nerves, though, and they were back to their best in the closing stages.

Although Erling Haaland had struggled in his prior two appearances, part of Dortmund's problem early on Sunday centred on their lack of a focal point in attack. Thankfully for Favre, they could instead turn to Sancho, who stole the show in the second half. A superb second made sure when BVB threatened to wobble.

There was focus on Dortmund goalkeeper Roman Burki against Bayern as he was beaten by a spectacular Joshua Kimmich chip, but opposite number Zingerle was the man in the spotlight this time. The Paderborn keeper had impressed in the first half but mishandled Can's centre to put BVB in the driving seat.

Dortmund face a tough test back in front of the Yellow Wall next week as a resurgent Hertha Berlin visit on Saturday. Paderborn's unlikely survival bid continues with a trip to Champions League quarter-finalists RB Leipzig.