Osasuna 0-2 Barcelona: Lionel Messi Sets Up Both Goals As Blaugrana Close The Gap In La Liga

Messi provided two assists as goals from Jordi Alba and Ilaix Moriba saw off Osasuna to propel Barcelona to within two points of Atletico Madrid. 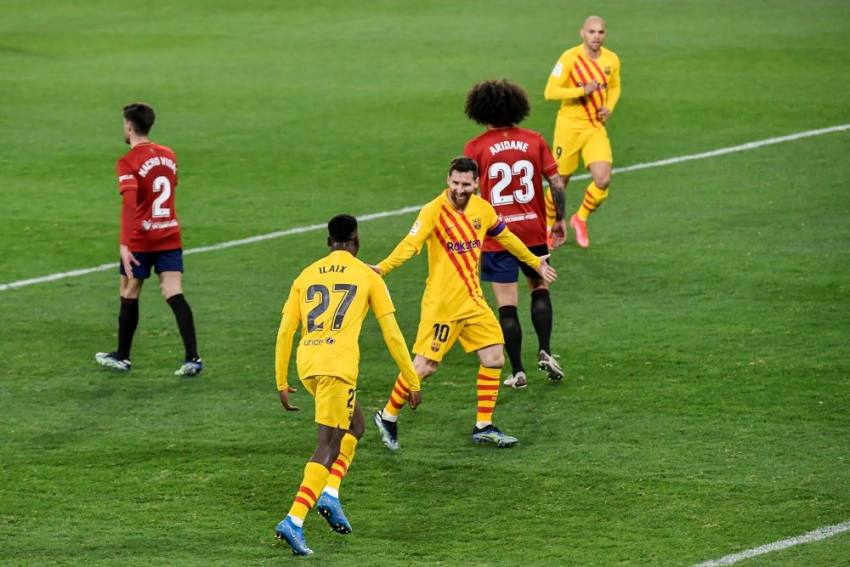 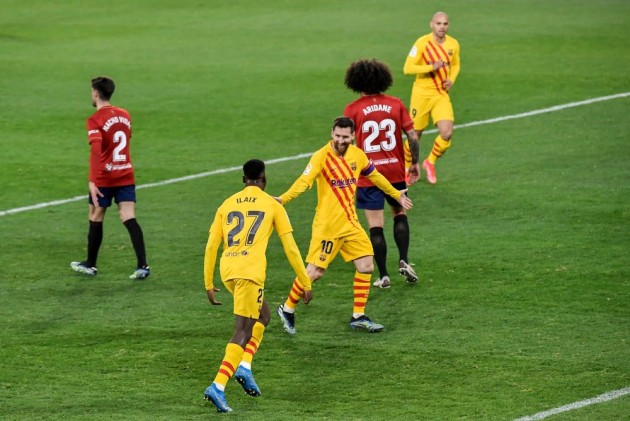 With Atleti going head-to-head with Real Madrid on Sunday, Barca took the chance to apply pressure to their title rivals by claiming an eighth successive away win in LaLiga.

Messi played an integral role, teeing up Alba to break the deadlock with a sublime pass – eight of the full-back's last 16 club goals have been assisted by Barca's number 10.

His second assist was more subtle, with a gentle lay off setting the stage for Ilaix to thump in his maiden Barca goal, and Koeman can now tune into the Madrid derby with his team in a strong position.

8 - Eight of Jordi Alba’s last 16 goals for Barcelona in all competitions have been assisted by Lionel Messi . Partnership. pic.twitter.com/e8LLqb1H5M

Jonathan Calleri tried for one of the goals of the season in the second minute, but Marc-Andre ter Stegen was alert to the attacker's attempt from inside Osasuna's half.

Ter Stegen had to be at his best 12 minutes later, brilliantly keeping out Kike Barja's rasping effort.

Alba made no such mistake in the 30th minute. Having raced onto Messi's perfect pass, he lashed a finish into the roof of the net.

Ter Stegen had to make another strong save when Ruben Garcia got the better of Oscar Mingueza, with opposite number Sergio Herrera then denying Messi a 20th league goal of the season after the restart.

Calleri should have made Barca pay for Ousmane Dembele’s profligacy when he met Garcia's cross, yet headed wide.

With Osasuna pushing for an equaliser, Barca picked them off – Messi cushioning a touch to 18-year-old Ilaix, who arrowed a wonderful strike into the top-left corner to wrap up the points seven minutes from time.

What does it mean? Barca breathing down Atleti's necks

It is now 16 LaLiga games unbeaten for Barca – the second best current unbeaten run of any team in the top five European leagues, after Manchester City, who have gone 19 Premier League matches without suffering a defeat, winning their last 17.

Closer to home, Barca are now two points off the pace at the top of LaLiga, though Atleti do have two games in hand. One of those is Sunday's Madrid derby, however, and even if Diego Simeone's side come out on top in that clash, it means Barca will have a three-point lead over Los Blancos.

Messi had scored three braces across his last five LaLiga visits to Osasuna prior to Saturday's meeting, while his next LaLiga goal will see him become the first player to score 20 times in Spain’s top flight in 13 consecutive seasons.

Including his two assists, he crafted six opportunities, three more than any other player, while also registering a game-high five shots, with two on target. His second assist, for Ilaix, led to the teenager becoming the youngest player to score from outside the area in LaLiga this season.

1 - @FCBarcelona's Ilaix Moriba (18 years and 46 days) is the youngest player to score from outside the box in @LaLigaEN this season. Diamond. pic.twitter.com/fSDtabPXj1

Calleri was not far behind Messi in terms of attempts, recording four efforts in total, yet only one of these – his early effort from around 70 yards out – hit the target.

With Ter Stegen in fine form, making three saves, Calleri lacked the composure from presentable chances either side of half-time, and his wastefulness proved costly.

Barca's attention now turns to the Champions League, as they head to Paris Saint-Germain needing to overturn a 4-1 first-leg deficit. Osasuna are next in LaLiga action against Real Valladolid.