He is Manchester United's youngest ever player in European competition and Ole Gunnar Solskjaer expects big things for Shola Shoretire. 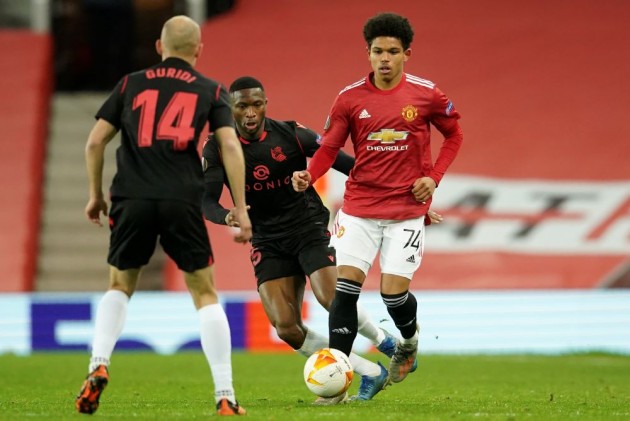 Shoretire, who made his senior debut in United's Premier League win over Newcastle United at the weekend, was introduced for the final 14 minutes of the 0-0 draw with La Real to become the Red Devil's youngest ever player in European competition at the age of 17 years and 23 days.

He was unable to make much of an impact as United booked their Europa League last-16 spot with a 4-0 aggregate victory over their LaLiga opponents, but Solskjaer believes the club have a hugely promising player on their hands.

"Shola will be a good player for us," the United boss said at a media conference. "Sometimes you need to test them against good players and we know Real Sociedad are a good team and have good individuals, who press. Shola and Amad [Diallo] will need introductions to this level.

"He is a young kid that we believe in; he has a great attitude. You can see the shape of him, psychically he'll be an athlete. Technically, he's very good and he makes good decisions.

"He's grounded, he works hard in training and he's a likeable boy who we hope we can see loads of in the future."

Mikel Oyarzabal missed an early penalty for La Real after Daniel James had fouled Andoni Gorosabel inside the area as United extended their unbeaten run in the Europa League at Old Trafford to 15 matches.

Solskajer acknowledged the importance of that miss – the first failed penalty attempt at Old Trafford against the home side since Everton's Leighton Baines in October 2014 – to the result, which ensured United have progressed from all five of their last-32 ties in the Europa League.

"We played against a very good team," he added. "They got an early penalty and thankfully they missed it. We didn't want to go into half-time one or two goals down. Of course, we are pleased to get through unscathed.

"I felt the first 10-15 mins were a bit slow, but we played some good stuff in the first half. In the second half we were not good with the ball, but we defended well. It just proves how good the performance last week was."

United are next in action on Sunday when they travel to Thomas Tuchel's in-form Chelsea in the Premier League.