NZ Vs IND, 2nd ODI: Will Regret When I See The Video Of My Dismissal, Laments Navdeep Saini

Navdeep Saini had smacked Kyle Jamieson for a six but was bowled in the next ball. Skipper Virat Kohli was even seen asking Saini to stay clam after he hit the ball out of park 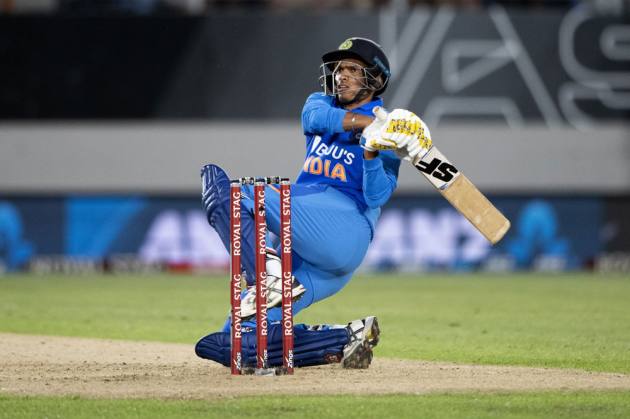 India pacer Navdeep Saini lamented his dismissal at a crucial juncture which resulted in team's series-conceding defeat in the second One-day International, at Auckland on Saturday.

Saini's 76-run partnership for the eighth wicket with Ravindra Jadeja kept India in pursuit of a 274-run target but the former's dismissal crushed team's hopes.

Saini had smacked Kyle Jamieson for a six but was bowled in the next ball. Skipper Virat Kohli was even seen asking Saini to stay clam after he hit the ball out of park.

"I will regret when I go back and see the video. If I hadn't got out, maybe the result could have been different. Will regret that I took it so close and maybe could have gotten closer," Saini said at the post-match press conference.

"We felt the wicket was flat and if we could stay till the end, the match could go close. So we were trying to contribute as much as possible and take the match to the end. Jadeja had told me that if you get a boundary ball hit it. Otherwise, take singles or doubles, try to keep patience and we can take the game to the end."

Saini was seen batting long in the nets pre-match and it paid off as he scored 45 off 49 balls, including five fours and two sixes. The pacer said it is important for the lower order to contribute runs for the team’s cause.

"It is a good thing that the lower order is performing like this. If everyone performs, it is called a team effort. If batsmen cannot score, bowlers should. If bowlers are not taking wickets, fielders should help. It is a team, after all.

"I was thinking that I got to bat after a long time. As soon as I hit the boundary, I was in shock. Wow, the ball is coming really well off my bat, I thought. Among the support staff, Raghu (throw down specialist) helps me with batting and is always encouraging me to do well. Even in hotel, he keeps telling me that I bat well and should do better. He keeps motivating me and always talks about my batting," he said.

Saini has been part of the Indian team’s set up since the World Cup. He was also part of that squad but as a back-up net bowler.

He said that settling down in the family environment has been easy, but there is a major step up from domestic to international cricket.

Also Read: Who Says What After India's Series Defeat

"There is lot to learn. I am learning as much as I am playing. Conditions are different than home. I am learning about my bowling, what lengths to bowl, how to plan, these things are important for me to learn and for my team. Difference is that margin of error is lower," he said.

India had reduced New Zealand to 197-8 at one stage. But debutant Kyle Jamieson helped Ross Taylor to put 270 on the board. That stand caught India by surprise and cost them the game.

"You feel bad that you lose the series obviously, but we will learn from our mistakes. Winning or losing doesn't matter much but our performances should get better," Saini said.

The third ODI will be played at Mt. Maunganui on Tuesday.