Paul George took over in the final minute as the Clippers rallied past Portland. 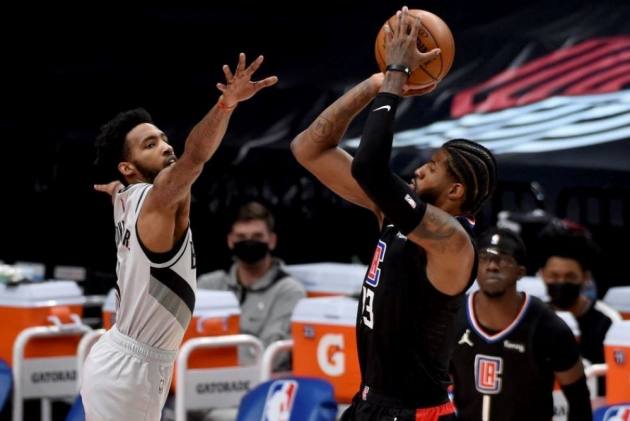 With each team down a superstar, Paul George lifted the Los Angeles Clippers to a 113-112 win over the Portland Trail Blazers on Tuesday after a last-minute rally.  (More Sports News)

The Clippers trailed by five entering the final minute of the game, but George hit two field goals and followed with two free throws to give the visiting side the lead with 4.8 seconds left.

George finished with 33 points and 11 rebounds as Kawhi Leonard missed the game after returning from a sore foot two days earlier.

The Blazers played without Damian Lillard, who missed his third consecutive game with a hamstring problem.

His absence left CJ McCollum to carry the load with 28 points, but he made only 11 of 26 shots from the floor and missed what would have been the game-winning shot at the buzzer.

The Nets also continue to miss key players, but they too have enough stars on hand to get by. Tuesday it was Kyrie Irving stepping up for injury-wracked Brooklyn in a 134-129 win over the Pelicans in New Orleans.

The Nets needed plenty of scoring to overcome a big night by Zion Williamson, who made 14 of 19 from the field to finish with 33 points and added seven rebounds.

After averaging 30.5 points in Sacramento's previous eight games, De'Aaron Fox managed only 14 in 28 minutes in the Kings' 134-120 home loss to the Minnesota Timberwolves. The point guard made just five of 17 shots from the field, a 29.4 per cent shooting effort. It was his worst offensive showing since he scored 12 points on five of 20 shooting in a loss to the Lakers on April 2.

Fans of the Timberwolves (16-43) haven't had much to cheer about this season, but at least top draft pick and Rookie of the Year contender Anthony Edwards can fill up a highlight reel on his own. The 19-year-old had a game-high 28 points in the rare Minnesota win.

And we're still amazed every time.

The Phoenx Suns (41-16), second in the Western Conference, travel to face the Eastern Conference-leading Philadelphia 76ers (39-18) in a meeting of top NBA title contenders Wednesday.