The Philadelphia 76ers and the Brooklyn Nets both lost on Wednesday although Joel Embiid almost produced heroics on the buzzer. 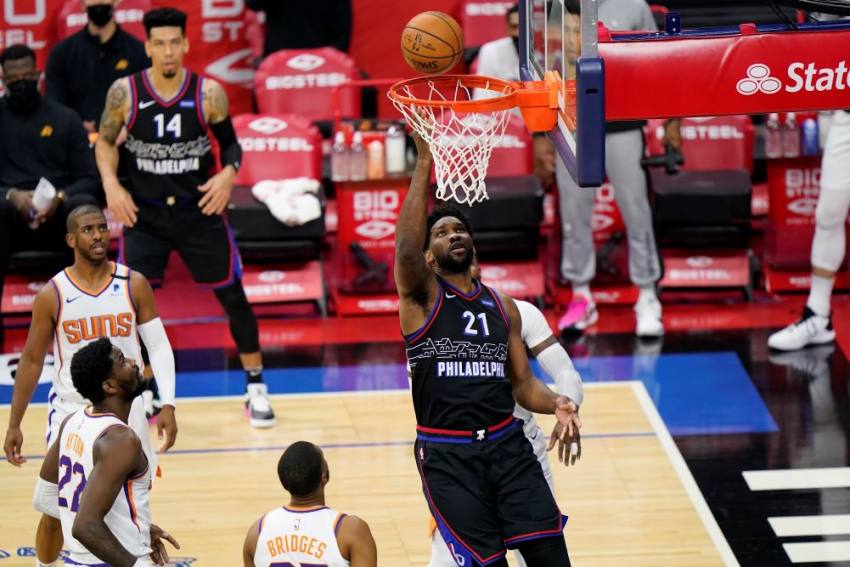 Philadelphia 76ers' Joel Embiid goes up for a shot during the first half of an NBA basketball game against the Phoenix Suns on Wednesday.
AP Photo/Matt Slocum
Omnisport 2021-04-22T13:42:08+05:30 NBA: Joel Embiid's Near Miracle As Phoenix Suns Edge 76ers, While Knicks Extend Their Winning Streak 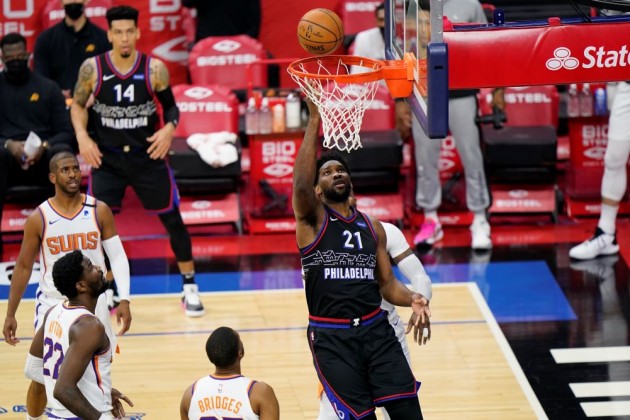 Joel Embiid almost pulled off a miracle on the buzzer as the Philadelphia 76ers went down 116-113 to the Phoenix Suns in the NBA on Wednesday night. (More Sports News)

The 76ers, top of the East, hosted the Suns, second in the West, and Phoenix appeared home when up by six points with 13 seconds to play.

But Philadelphia stayed alive after Furkan Korkmaz's three-pointer, before Chris Paul missed a free-throw, with Embiid grabbing rebound and firing off a long-range shot immediately which came remarkably close only to rim out.

Earlier, Embiid had scored 38 points and collected 17 rebounds for the 76ers, while Suns guard Paul had 28 points and eight assists.

@JoelEmbiid ALMOST forced OT from the other end! #PhantomCam pic.twitter.com/rMtN5nXSVA

However, the Raptors all contributed led by Pascal Siakam with 27 points, nine rebounds and six assists, as they reeled in a 36-23 quarter-time deficit to win by 11.

Stephen Curry's 11-game streak of 30-plus points came to an end at the hands of the Washington Wizards who won over the Golden State Warriors 118-114.

Russell Westbrook produced another triple-double with 14 points, 10 assists and an outstanding 20 rebounds, while Bradley Beal had 29 points. Curry could only manage 18 points for GSW.

On the topic of streaks, the New York Knicks extended their winning run to seven games with a 137-127 triumph over the Atlanta Hawks after Bogdan Bogdanovic forced over-time with a clutch three.

Julius Randle was exceptional with 40 points, 11 rebounds and six assists, including six three-pointers, while the Hawks lost Trae Young to a sprained left ankle.

The Utah Jazz reinforced top spot in the Western Conference with a comfortable 112-89 win over the Houston Rockets with Rudy Gobert having 19 points and 18 rebounds.

The Los Angeles Clippers kept up the pressure with a 117-105 victory over the Memphis Grizzlies, with shooting guard Luke Kennard adding 28 points and seven rebounds.

Curry covered at every turn

Curry was not afforded any time or space against the Washington Wizards and subsequently shot two-from-14 beyond the arc.

Up by two in the third, OG Anunoby made a big statement for the Toronto Raptors with a block down one end and then a monster right-hand dunk over Joe Harris after Fred VanVleet's assist down the other in the same play.

OG Anunoby swipe on one end and FLUSH on the other!

Joel Embiid's Philadelphia 76ers (39-18) will look to bounce back from Wednesday's loss to the Phoenix Suns when they travel to Giannis Antetokounmpo's Milwaukee Bucks (35-22) in a bumper East clash.