Stephen Curry maintained his red-hot form for the Golden State Warriors, while Nikola Jokic lifted the Denver Nuggets on Monday. 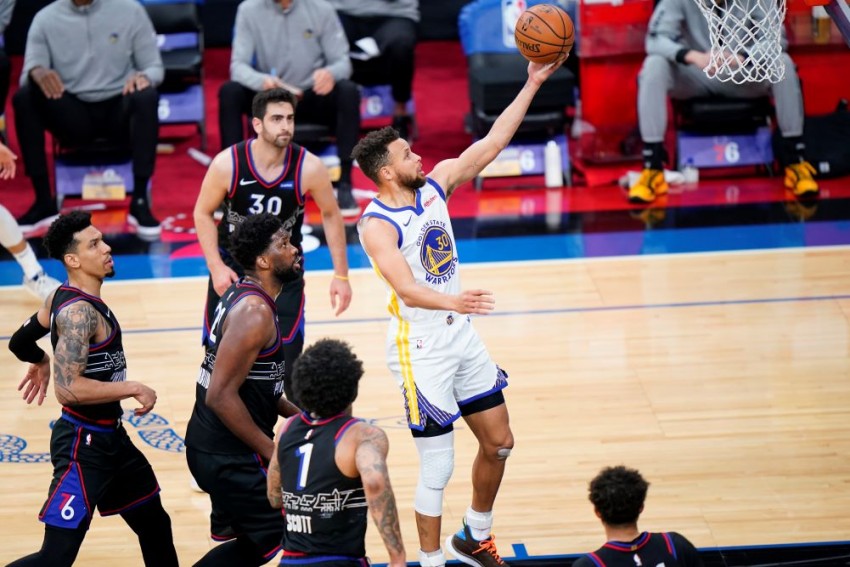 Golden State Warriors' Stephen Curry, right, goes for a shot during the first half of an NBA basketball game against the Philadelphia 76ers on Monday.
AP Photo/Matt Slocum
Stats Perform 2021-04-20T13:40:08+05:30 NBA: Curry Drops 49 On 76ers In Record-breaking Display And Jokic Fuels Nuggets With 47 As Suns Stay Hot 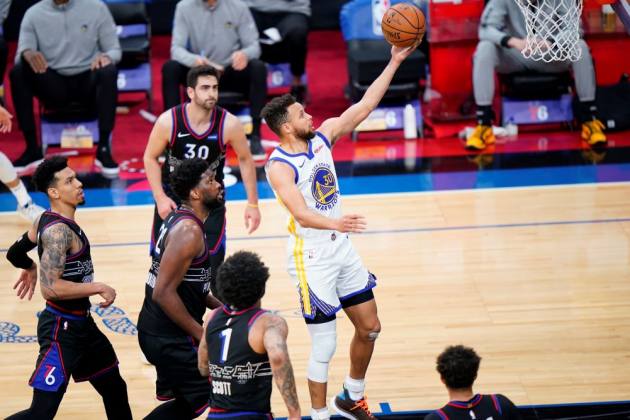 Curry maintained his red-hot form in a red-breaking display in Philadelphia, where the two-time NBA MVP nailed 10 three-pointers to sink the 76ers on Monday.

The Warriors superstar became the first player to make 70-plus threes in a 10-game span on a memorable outing on the road.

Curry has more games with 40-plus points and 10-plus threes over the last eight days (four) than any other NBA player has had over their entire career, per Stats Perform.

Joel Embiid put up 28 points and 13 rebounds in the absence of fellow All-Star Ben Simmons, but the 76ers still had their four-game winning streak snapped.

Nuggets prevail in double OT thanks to Jokic

MVP favourite Nikola Jokic put on a show. He had 47 points – including the go-ahead three-pointer late in the second period of overtime – 15 rebounds and eight assists as the Denver Nuggets survived to beat the Memphis Grizzlies 139-137 after double OT.

Russell Westbrook had his 26th triple-double of the season – 13 points, 17 assists and 11 rebounds – as the Washington Wizards celebrated their fifth consecutive victory by downing the Oklahoma City Thunder 119-107.

A season-high 30 points from Kendrick Nunn fuelled the Miami Heat's 113-91 win over the Houston Rockets.

Avery Bradley has found it tough since arriving in Houston as part of the deal that sent Victor Oladipo to the Heat. He missed all three of his field-goal attempts – including two from beyond the arc – as he finished scoreless after 22 minutes.

George Hill made his debut for the 76ers. Acquired in a trade last month, Hill was one-for-five shooting for two points in 18 minutes. Philadelphia team-mate Shake Milton, usually a reliable scorer, finished with just five points on one-for-seven shooting off the bench.

The Thunder extended their season-worst losing streak to 11 games after going down to the Wizards in Washington.

Chris Paul was at his brilliant best again as the high-flying Suns edged the Bucks. Paul posted 22 points and 13 assists as the Suns star passed Magic Johnson for fifth on the all-time assists list.

One of @CP3's 13 dimes in #PhantomCam as he passed Magic Johnson tonight for 5th on all-time assists list! #WeAreTheValley pic.twitter.com/ScrQSrXQsn

The Brooklyn Nets (38-19) will be without superstar pair Kevin Durant (thigh) and James Harden (hamstring) for Tuesday's trip to the New Orleans Pelicans (25-32).