Milan bounced back from their defeat to Juventus by overcoming Torino 2-0 at San Siro to take a four-point lead at the top of Serie A. 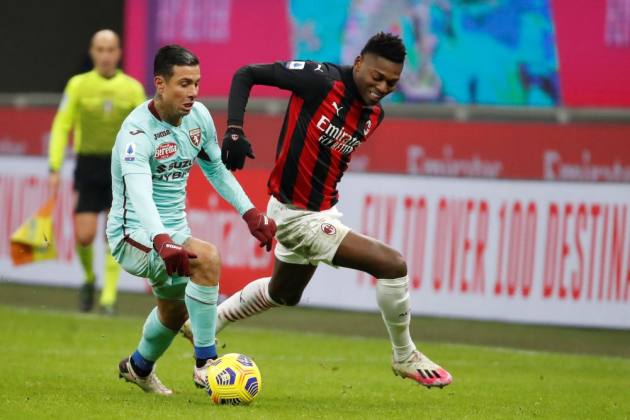 Milan bounced back from their midweek defeat to Juventus by overcoming Torino 2-0 at San Siro to take a four-point lead at the top of Serie A.  (More Football News)

Stefano Pioli's team suffered their first loss of the season last time out but produced a response worthy of champions, turning in an accomplished display on Saturday.

With Zlatan Ibrahimovic making a return off the bench following his recovery from injury, Rafael Leao opened the scoring before Franck Kessie's penalty made it 2-0.

Torino had a penalty of their own overturned in the second half but Andrea Belotti's poor header to end a rare attack summed up a disappointing performance, meaning their long wait for a league win at Milan goes on.

16 - #ACMilan have scored 2+ goals in 16 league matches so far: no side have managed a better such tally in the #SerieA history during the first half of the season (also Internazionale did so in 16 games in 1949-50 and in 1950-51). Wealth.#MilanTorino #SerieATIM pic.twitter.com/SCaco8735U

The hosts managed four attempts by the 17th minute and their dominance told when Theo Hernandez found Brahim Diaz, whose slick first-time pass played in Leao to dispatch a finish which the watching Ibrahimovic would have been proud of.

Referee Fabio Maresca pointed to the spot and despite checking with VAR, found no reason to change his decision. Kessie calmly sent Salvatore Sirigu the wrong way.

The crossbar prevented Ricardo Rodriguez pulling one back against his former club with a superb free-kick – Torino's first shot – while Sirigu made a brilliant stop to deny Kessie on the stroke of half-time.

Torino thought they had a lifeline when Simone Verdi went down under pressure from Sandro Tonali but, after initially giving the penalty, referee Maresca overturned his decision following a check. Tonali came off worse from the collision too, the former Brescia midfielder having to be taken off on a stretcher.

Belotti wasted his first sight of goal by heading tamely at Gianluigi Donnarumma, who pulled off a fantastic 90th-minute stop to keep out Jacopo Segre's deflected attempt to stem any danger of a late Torino comeback.

What does it mean? Free-scoring Milan put the pressure on their rivals

Milan have now scored two or more goals in 16 of their 17 league matches so far this season. No side has managed a better tally in Serie A history during the first half of a campaign, with Inter having done so in 1940-50 and 1950-51.

The return of Ibrahimovic adds another vital element to Pioli's potent attack, with the pressure now on Inter – who face Roma on Sunday – to keep pace with their city rivals. Milan also sit 10 points clear of fifth-placed Juventus, who do have two games in hand.

Real Madrid loanee Diaz is not a regular starter but, in the central spot usually occupied by Hakan Calhanoglu, the 21-year-old completed 19 of 20 attempted passes and won four free-kicks during his 60 minutes on the pitch.

The vision he displayed for the cushioned pass through to Leao for Milan's opener was of the highest quality, while his skill and guile drew Belotti into a clumsy challenge.

Belotti's bad day at the office

Belotti has scored five Serie A goals at San Siro, only managing more away at the Stadio Olimpico. However, the Torino captain was well off the boil this time around, managing just one attempt on target – which was never likely to test Donnarumma – while also fouling Diaz for Milan's penalty.

It is a case of same time, same place for these two sides on Tuesday, with Milan hosting Torino in the Coppa Italia.