Milan 2-0 Fiorentina: No Zlatan Ibrahimovic, No Problem For Serie A Leaders

Alessio Romagnoli and Franck Kessie were on target before half-time against Fiorentina as Serie A leaders Milan marched on without Zlatan Ibrahimovic. 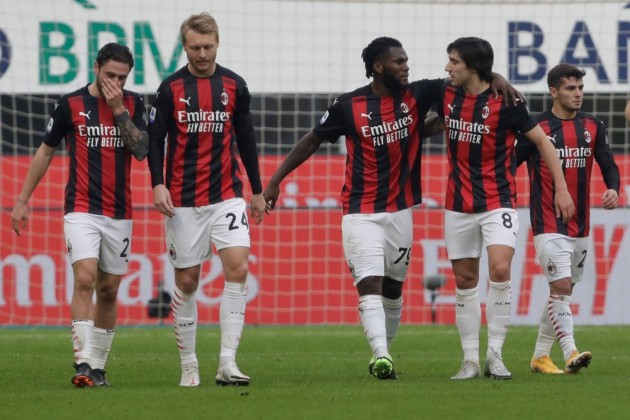 Milan made light of Zlatan Ibrahimoivic's injury absence with an assured 2-0 win over Fiorentina to restore their five-point advantage at the top of Serie A. (More Football News)

Evergreen striker Ibrahimovic made it 10 goals in six top-flight matches this season when his brace inspired a 3-1 win at Napoli, although he limped off with a hamstring complaint in the closing stages.

Yet Stefano Pioli's side marched on without their talisman against struggling Fiorentina, with Franck Kessie netting one first-half penalty and missing a second after Alessio Romagnoli opened the scoring.

The result meant Milan were able to keep Inter at arm's length in what is shaping up to be an intriguing title battle, their city rivals having dispatched third-placed Sassuolo 3-0 on Saturday.

29 - Milan have equaled their record streak of consecutive Serie A scoring games (29): the previous was between 1972 and 1973. Implacable.#MilanFiorentina pic.twitter.com/W9M0VV7v3Q

Fiorentina undid an encouraging start in the 17th minute when Milan captain Romagnoli was left unmarked at the back post to nod in Kessie's flick-on from Hakan Calhanoglu's right-wing corner.

Dusan Vlahovic thumped against Gianluigi Donnarumma's near post as Cesare Prandelli's men searched for an equaliser but they were left with a mountain to climb when German Pezzella clumsily brought down Alexis Saelemaekers in the area.

Kessie coolly sent Bartlomiej Dragowski the wrong way but the Fiorentina goalkeeper levelled their personal battle in the 40th minute – springing to his left to keep out a poorly struck spot-kick after Martin Caceres bundled into the marauding Theo Hernandez.

Calhanoglu fizzed a fabulous half-volley into the side netting before half-time and came even closer in the 53rd minute, hitting the base of the left post.

Franck Ribery almost reduced the arrears two minutes later but Donnarumma was equal to the veteran campaigner's dinked effort – a squandered chance which summed up a Fiorentina display littered with moments of self-sabotage.

You have to go back to the 2010-11 season, the final campaign before Juventus' ongoing dominance began, for the last time the Milanese clubs finished first and second in Serie A. Milan, inspired by Ibrahimovic's goals, prevailed on that occasion. His supporting cast look in fine order a decade on.

Milan remain the only team alongside Atletico Madrid in Europe's top five leagues to be unbeaten since the coronavirus shutdown and scored for a 29th consecutive game – equalling their previous best run in Serie A set between 1972 and 1973.

The Turkey playmaker did everything but get on the scoresheet, although his five shots (including one blocked) showed it was not for want of trying. Calhanoglu was Milan's creative inspiration throughout, making five key passes, completing 83.3 per cent of his passes in the opposition half and four of seven crosses.

The Fiorentina captain's attempts to lead by example backfired horribly when he conceded the crucial first penalty. Pezzella – an Argentina international – won only four of his nine duels during the contest.

Milan host Celtic in the Europa League on Thursday, while Fiorentina are back in action at home to Genoa next Monday – a day after the Rossoneri travel to Sampdoria.