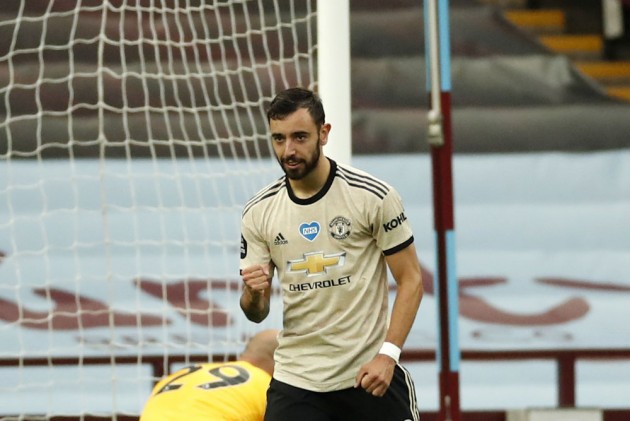 Bruno Fernandes hit back at Jurgen Klopp after the Liverpool manager complained about the number of penalties awarded to Manchester United. (More Football News)

Klopp was unhappy his side were not given a penalty during a loss to Southampton earlier this month and the German pointed to the number of spot-kicks United had been awarded.

Since the start of last season, United have won 20 penalties in the Premier League compared to Liverpool's 10.

Fernandes, who has scored five penalties in the Premier League this season, insisted he was unfazed, also suggesting Klopp was trying to put pressure on referees ahead of United's trip to Anfield on Sunday.

"You always see what people say, but I really don't care. I'm not focused on what they're saying. We have really quick players up front," he said.

"Anthony Martial is one of the best players one against one in the box, Marcus Rashford is another one who is quick and has quick feet, who can take the ball away from the defender at any moment.

"It's normal that sometimes, because of that, they will be tripped and will fall and they gain penalties.

"People can talk and say what they want, but for me and the team, the main point is continuing to do the right things and when we get a penalty, just scoring.

"I played in Portugal and when you play for Sporting Lisbon, Benfica and Porto are always talking about that kind of stuff – sometimes to put pressure on the referee."

United visit champions Liverpool with a surprise three-point lead atop the table.

Liverpool claimed their first top-flight title since 1990 last year, moving onto 19 in total – one shy of United's record.

Fernandes said the players were aware how much such records meant to supporters.

"You don't want your rivals at the same level as you, or with the same amount of trophies as you," he said.

"So it's clear for everyone here at the club and in the dressing room, everyone knows what it means for the supporters.

"It would be a lot more fun with 21 titles and Liverpool still on 19, of course."