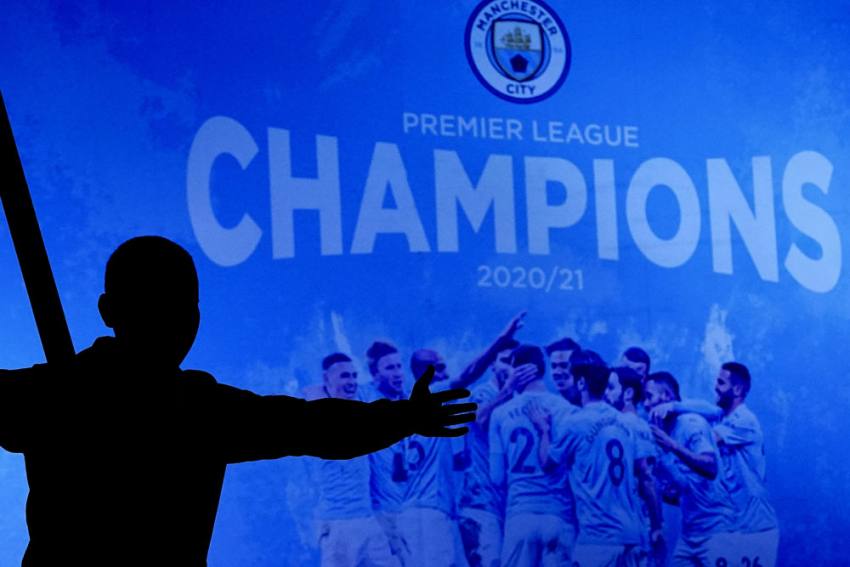 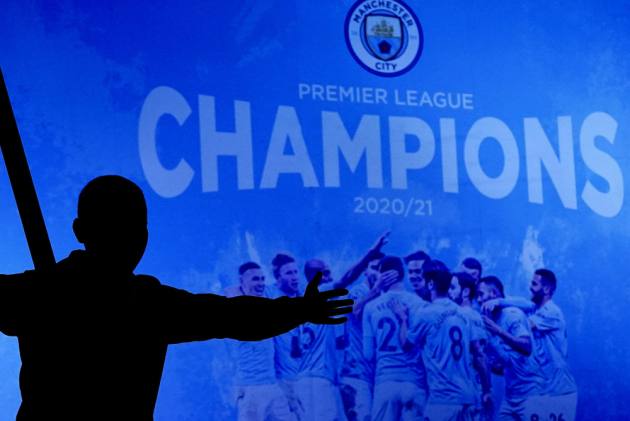 United were the only team with a mathematical chance of overhauling Pep Guardiola's side, but a line-up bearing 10 changes from Sunday's 3-1 victory at Aston Villa showed how realistic Ole Gunnar Solskjaer thought those hopes were.

Liverpool are at Old Trafford on Thursday for their rearranged game, and Solskjaer's youthful line-up for this second of three matches in five days fell behind when Luke Thomas brilliantly steered in a 10th-minute volley for his first Premier League goal.

Mason Greenwood extended his recent purple patch to eight goals in 11 outings shortly afterwards but United carried little threat and Leicester centre-back Soyuncu was left to make his most telling contribution at the other end of the field midway through the second half.

It meant a third title in four seasons for Manchester City – an outcome that felt slightly fanciful when they lost 5-2 at home to Leicester back in September.

There was an injury scare for United left-back Alex Telles early on and Leicester's opener came as Youri Tielemans made progress down his flank, possibly over hitting the cross from which Thomas finished with aplomb.

19 - At 19 years and 335 days, Luke Thomas is the youngest player to score his first Premier League goal in a match against Manchester United at Old Trafford. Stage. #MUNLEI

A teenager more familiar with the scoresheet quickly got United back on terms, Greenwood drilling home in superbly assured fashion after Amad Diallo got the better of Thomas.

David De Gea pushed another awkwardly dipping Tielemans cross behind for a corner in the 28th minute, as the lively start to proceedings gave way to a more fragmented contest.

The Belgium midfielder remained the only Leicester player who looked frequently capable of unlocking a patched-up United and he slid a pass into Kelechi Iheanacho – De Gea sharply denying the striker with his boot.

What does it mean? Leicester take huge step towards Champions League

After spending much of last season in the top four before dropping out at the last, Leicester's recent form will have made their fans feel particularly queasy. A 1-1 draw against Southampton was followed by a humbling 4-2 defeat to Newcastle United last Friday – both teams who have struggled at the wrong end of the table this term.

Their failure to impose themselves convincingly on a scratch United line-up spoke of all that baggage but Soyuncu's winner means they have an eight-point cushion over fifth-placed West Ham having played a game more. Liverpool are a point further back in sixth with two games in hand, but Leicester have it all in their hands going into closing league matches versus Chelsea and Tottenham.

Tielemans the man for Manchester

Tielemans converted a late penalty as Leicester piled misery upon the team who would become champions at the start of the campaign and he enjoyed himself in Manchester once more here. His run to create the opener was excellent and he also mucked in with the dirty work – making a team-high three blocks.

Donny van de Beek has become an increasingly marginal figure during his maiden season, and the most damning assessment was that it felt completely unsurprising to see him make no creative or attacking contribution of note. The former Ajax favourite will be keen to put 2020-21 to bed.

- Leicester won an away top-flight game against United for the first time since January 1998 (1-0), with this just their second such win in their last 23 visits to Old Trafford (W2 D5 L16).

- United have lost five Premier League games at Old Trafford this season, as many in their previous two campaigns combined.

- Since the start of last season, Greenwood has scored more goals in all competitions than any other teenager in Europe's top five leagues (29).

- Diallo assisting Greenwood was the first time a teenager assisted another teenager for a Premier League goal since David Wheater set up Adam Johnson for Middlesbrough in May 2006.

United take on Liverpool in their re-arranged clash on Thursday, with Leicester in FA Cup final action against Chelsea on Saturday.

Misbah-ul-Haq Says, I Don't Care About Critics And Their Criticism