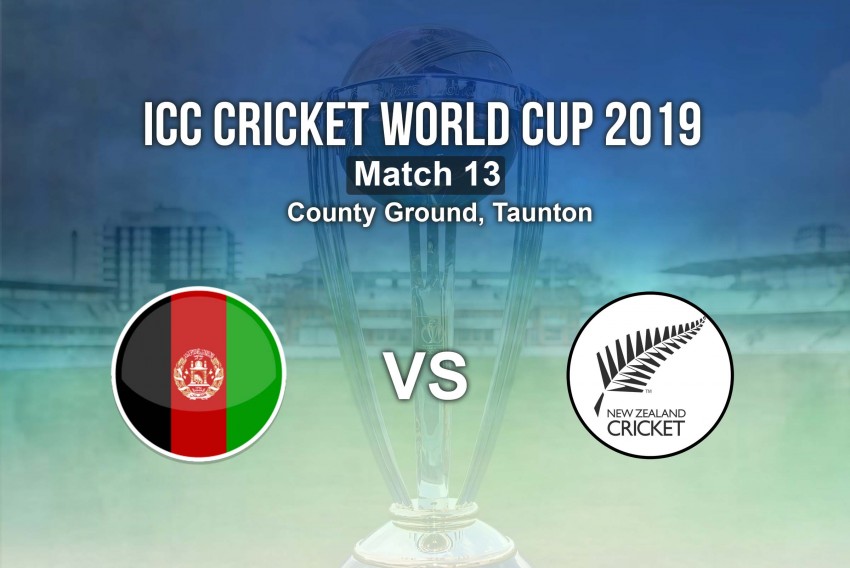 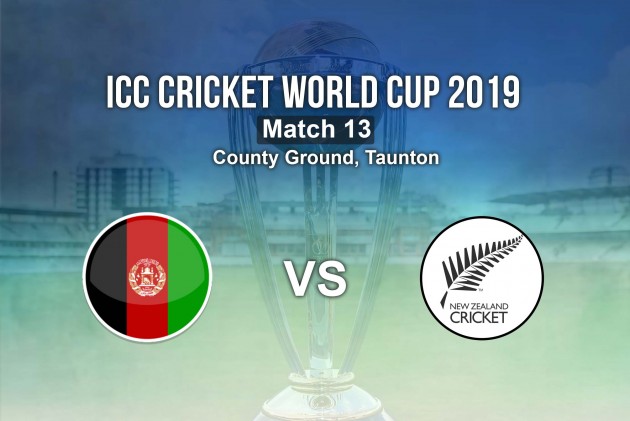 James Neesham, Player of the Match for his 5/31: "Obviously pretty pleased with how the ball came out today. Afghanistan put us under a lot of pressure at the start of the game but we knew if we kept pushing hard and putting the ball in the right areas that we'd be able to get through and obviously we did a pretty clinical job chasing. I just wanted to get back to what I do bowling and try to be consistent, hit the deck as much as possible and not worry about swinging the ball because that's not my forte."

00:20 hrs IST: OUT! Alam gets his man. Taylor bowled for 48. Meanwhile, Williamson has reached his half-century. Tom Latham comes to the crease. New Zealand are 130/3 after 25.4 overs.

00:11 hrs IST: FOUR! Too short from Rahmat, Williamson rocks back and pulls it to the backward square leg boundary. New Zealand are 113/2 after 24 overs.

23:30 hrs IST: Naib completes his fourth over. Five runs from it, which includes a four off the third ball, hit by Taylor to third man. Sublime timing from the former Kiwi captain. New Zealand are 61/2 after 13 overs.

23:27 hrs IST: Nabi backs up his skipper with a fine over. Four runs -- a wide and three singles. New Zealand are 56/2 after 12 overs. They need 117 runs more to register three wins in as many outings.

23:20 hrs IST: Six runs from Alam's fifth over. Taylor hits the third ball for a four through square leg after a couple of singles. New Zealand are 52/2 after 10 overs.

23:09 hrs IST: OUT! Second wicket for Alam, gets the better of Munro 22(24). Short delivery, the New Zealander looks to play it over third man but doesn't get the timing and Hassan does the rest. Ross Taylor comes to the crease. New Zealand are 41/2 after 8 overs.

23:02 hrs IST: FOUR! Back of a length delivery from Naib and Williamson punches it in the gap between cover and point. New Zealand are 39/1 after 7 overs.

22:57 hrs IST: FOUR! Short of length from Hassan, Williamson looks to cut but gets an inside edge and it races to the fine leg boundary. New Zealand are 34/1 after 6 overs.

22:44 hrs IST: FOUR! Full delivery from Alam and Munro hits it past the fielder at mid-off for a boundary. New Zealand are 20/1 after 3 overs.

BREAKING - Rashid Khan has failed his first concussion assessment. He may not be able to take any further part in the match.

22:34 hrs IST: Consecutive boundaries from Munro. New Zealand are 11/1 after the first over. Hamid Hassan comes into the attack.

22:31 hrs IST: OUT! Guptill gone first ball. Great start from Afghanistan. Gets an inside edge onto thigh pad and it flies to Najibullah at backward point. Kane Williamson comes to the crease.

21:38 hrs IST: OUT! And Ferguson takes his third. Alam departs. Fifth catch of the day for Latham. Hamid Hassan, the new batsman, gets off the mark with a boundary. Afghanistan are 153/9 after 36 overs.

21:25 hrs IST: OUT! Rashid gets hit on the helmet. The Afghan No. 9 came forward to defend but it bounces into his helmet and goes onto the stumps. Second wicket for Ferguson. Aftab Alam comes to the crease. Afghanistan are 135/8 after 34 overs.

21:11 hrs IST: Stupendous over from Henry, just two off it. Afghanistan are 129/6 after 31 overs. Taylor drops one at slip. Henry has been unlucky today.

Earlier, Trent Boult completed his fifth over. Only a single off it.

20:08 hrs IST: And once again, rain halts play. This is frustrating, both for the players and fans. It does lok pretty dark. We'll keep you posted.

20:02 hrs IST: Single off the last delivery for Nabi. De Grandhomme finishes his third over, six off it. Afghanistan are 90/4 after 21 overs. Neesham to continue.

19:43 hrs IST: Covers being removed. We should resume soon. Meanwhile, Bangladesh have lost Soumya Sarkar early in their pursuit of 387. Roy top-scored for England with 153.

19:35 hrs IST: And rain stops play. The covers are being brought on. Only the pitch is covered for now.

19:24 hrs IST: Another maiden, this time from Neesham. Afghanistan are 72/4 after 18 overs. De Grandhomme again.

19:16 hrs IST: Three maidens in a row from Ferguson. This is superb bowling from the New Zealander. No margin of error. Afghanistan are 71/4 after 16 overs. Colin e Grandhomme comes into the attack.

19:07 hrs IST: OUT! Touch short from Neesham, outside off, Naib goes for the cut shot but gets a faint edge and Latham collect it. The Afghanistan captain reviews it but UltraEdge shows a spike as it passes the bat. Mohammad Nabi comes to the crease. Time for drinks!

19:04 hrs IST: Back-to-back maiden overs from Ferguson.He's making the ball talk like anything! Afghanistan are 70/3 after 14 overs. They need a big patnership here.

18:51 hrs IST: OUT! Extra pace and bounce does the trick. Two wickets in three balls. Ferguson gets Noor. Tom Latham completes a neat catch behind the stumps. Hashmatullah Shahidi comes to the crease.

18:47 hrs IST: OUT! Full and wide from Neesham, Zazai looks to hit it over sweeper cover but doesn't get the timing and Colin Munro does the rest. Rahmat Shah comes to the crease. Afghanistan are 66/1 after 11 overs.

18:37 hrs IST: SIX! Back of a length delivery from Henry and Zazai hammers it over deep square leg boundary for a maximum. Another costly over from the New Zealander, 12 runs off it. Afghanistan are 51/0 after 9 overs. First change in bowling. Lockie Ferguson comes into the attack.

18:24 hrs IST: FOUR! Low full-toss from Boult and Noor times it to the right of the fielder at mid-off. Afghanistan are 33/0 after 6 overs. Henry again. New Zealand need a wicket here.

18:20 hrs IST: FOUR! Overpitched from Henry and Noor drives it straight past the bowler. Colin de Grandhomme makes a mess of a chance at deep mid-wicket. Zazai should have been back in the pavilion. Was a tough one but you need to take those. Afghanistan are 27/0 after 5 overs.

18:15 hrs IST: Another magnificent over from Boult, just one off it. Afghanistan are 19/0 after 4 overs.

18:07 hrs IST: Solid start from Boult. Tests both openers. Afghanistan are 16/0 after 2 overs. Henry to continue.

18:03 hrs IST: Three boundaries in a row for Zazai. First one - short delivery and helped to fine leg. Second - Outside edge that flew over the fielder at first slip. Third - Back of a length delivery and he smacked it past mid-wicket. Afghanistan are 12/0 after the first over. Trent Boult comes into the attack.

18:00 hrs IST: Time for live action. Hazratullah Zazai to take strike. Matt Henry, who has been in splendid form, to begin the proceedings.

17:33 hrs IST: New Zealand have won the toss and have opted to field.

New Zealand pacer Mark Henry: "We have a new challenge coming up against Afghanistan in different conditions. We'll have to adapt and bring our 'A game' to put our best foot forward to get another win."

Afghanistan captain Gulbadin Naib: "We can take a lot of [positive] things from the last game with Sri Lanka. One time it looked like we were in the game. Me and Najibullah [Zadran] batted really well. We hope we carry on our momentum in the upcoming matches."

16:26 hrs IST: New Zealand won the only previous ODI between the two nations by six wickets at the 2015 World Cup.

16:07 hrs IST: BIG NUMBER - New Zealand have won 10 of their last 11 World Cup matches - their only defeat during that span coming in the final against Australia four years ago.

15:58 hrs IST: Hello and welcome to Outlook's live coverage of the 2019 World Cup encounter between Afghanistan and New Zealand.

Afghanistan's spinners will be hoping to cause New Zealand a few problems and get their team on board the points table. Leg-spinner Rashid Khan will lead the charge with Mohammed Nabi, who returned figures of 4/30 with his off-spin against Sri Lanka.

Afghanistan have suffered a big blow with Mohammad Shahzad being ruled out of the World Cup with a knee injury. Wicket-keeper batsman Ikram Ali Khil has been named as his replacement.

New Zealand were sent into a spin by Bangladesh last time out but coach Gary Stead isn’t concerned about how his side will cope with another slow-bowling onslaught from Afghanistan.

Every member of the Black Caps’ top six perished to a spinner against Bangladesh, as what looked like a relatively sedate chase of 244 turned into a late-night thriller at the Oval, before Stead’s men eventually edged to a two-wicket victory.

New Zealand faced 27 overs of spin in that game and can expect a similar amount from Afghanistan in Taunton – with the Asian side boasting the likes of right-arm off spinners Mujeeb Ur Rahman and Mohammad Nabi, as well as ‘mystery’ leggie Rashid Khan, in their bowling attack.

But Stead isn’t worried about any sort of Achilles heel having been exposed as his team aim to make it three wins from three in the ICC Men’s Cricket World Cup 2019.

“Afghanistan are definitely a force and spin is one of their strength areas,” admitted Stead.

“But it’s not worth putting too much focus on our top six all getting out to spinners because almost 30 overs of the 47 were spin anyway."