Kolkata Knight Riders have lost 10 out of their last 11 games against Mumbai Indians. Highlight's of Tuesday's KKR vs MI here 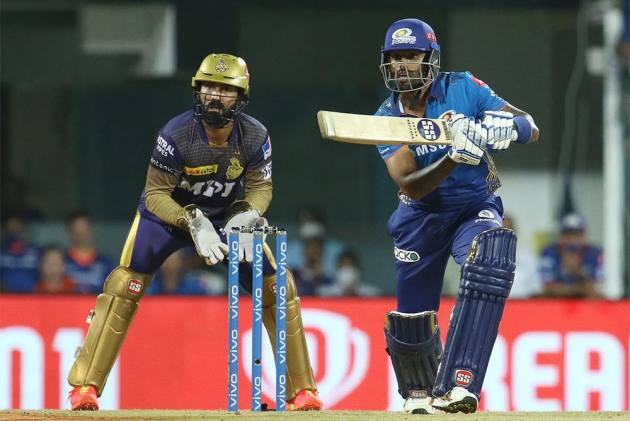 In a fascinating contest, defending champions Mumbai Indians defended a below-par total against their favourite whipping boys, Kolkata Knight Riders and opened Indian Premier League (IPL) 20021 account on Tuesday. After posting 152, the five-time champions hit back in style to restrict Eoin Morgan's KKR to 142/7 at MA Chidambaram Stadium, Chennai. KKR were in control for the most part of the chase with opener Nitish Rana playing a controlled knock of 57 runs from 47 balls. But once Rana's departure, KKR lost wickets in quick succession. Rahul Chahar took four wickets for 27 runs. Needing 15 from the last over, Trent Boult started with a single to Andre Russell. Then the Kiwi quick dismissed Russell and Pat Cummins off successive balls to effectively sealed the match. And at point, they need 31 needed off 30 with six wickets in hand. But somehow, they ended up losing by 10 runs. Earlier, Russell took a fifer with his best figures in T20 cricket (5 fo 15 in two overs) to restrict MI to 152 all out. Suryakumar Yadav hit 56 off 36 and skipper Rohit played a subdue knock of 43 from 32. Catch highlights and cricket scores of KKR vs MI match here:

9:18 PM IST: Sensational short spell from Andre Russell. Five wickets in two overs for just 15 runs and Mumbai Indians are all out for 152.

7:06 PM IST:  KKR are unchanged. One change for MI with Quinton de Kock coming in for Chris Lynn. Here are the playing XIs: