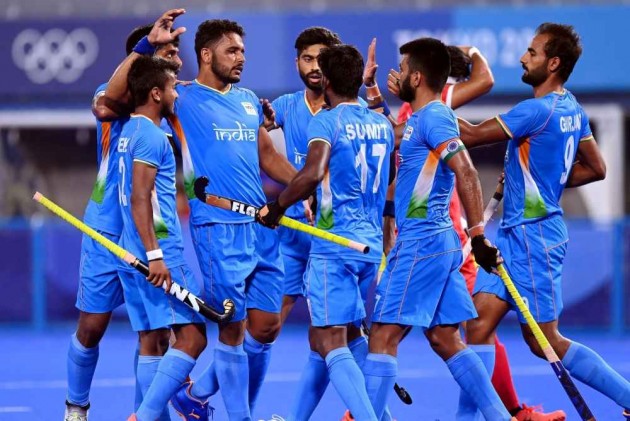 With Tokyo Olympics in its final week, India's medal hopes are narrowing down to hockey, wrestling, athletics and boxing. India began their wrestling campaign with rookie Sonam Malik who was ousted in the first round.  After the runners drew a blank, India's hopes will now rely on javelin with shot putter Tajinderpal Singh Toor disappointing with below-par show. Men's hockey team will now take on Germany in the bronze medal match.   Catch the highlights of Indians at Tokyo Olympics here. India have three medals so far. (MEDAL TALLY | AUGUST 3 SCHEDULE|NEWS)

Australia beat Germany 3-1 to reach first final since 2004.  Germany will now take on India in the bronze-medal playoff.

Shot putter Tajinderpal Singh Toor fails to qualify for final and ends Olympic campaign with below-par performance.  The Asian record holder shot putter Toor's finished 13th in the qualification Group A on Tuesday. with his best throw of 19.19m. He fouled on his next two throws

Australia are leading Germany in the second semifinals. The winners will face Belgium in the final, while loser faces India in bronze medal match

India's Tajinderpal Singh Toor has fouled in his third throw and his best remains 19.19m, which was his first throw. Toor has now dropped to 12th position.

India's Tajinderpal Singh Toor has fouled in his second throw and his best remains 19.19m which sees him drop to 12th position.

India's Tajinderpal Singh Toor was sixth after a throw of 19.19m.

India's Tajinderpal Singh Toor has achieved a distance of 19.99

India's Tajinderpal Singh Toor in action and is the first in action; This group has 16 players and Group B has 15 players.

Automatic qualification for final has been set at 21.20m. Top 12 qualify for the final.

3:02 PM IST: Artistic Gymnastics:
Simone Biles is back in action. She is placed second in the beam competition
Xijing Tang of China is in lead with  14.233.

1-2 finish for China with Xie Siyi and Wang Zongyuan taking gold and silver, ahead of Great Britain's Jack Laugher.

Great Britain's Katie Archibald, Laura Kenny, Neah Evans, and Josie Knight smash the world record with a time of 4:06.748. They will face USA in the final.

Karsten Warholm of Norway creates a new world record with a time of 45.94. Benjamin Rai of the US and Alison dos Santos of Brazil take silver and bronze respectively.

Upcoming - India face Belgium for a place in the final.

The men's hockey team is playing an Olympic semifinal after the 1972 Munich Olympics. Although India won gold in the 1980 Moscow Games, there were no semifinals with the top two among six nations playing the final after a round-robin league.

Belgium are the current world champions and have been the most prolific team in Tokyo 2020 but India have been remarkably gritty. The way Manpreet Singh's team has rebounded after a 7-1 drubbing against Australia in a group match has been truly magnificent. In the quarterfinals, India had beaten Great Britain 3-1 while Belgium came back to beat Spain by a similar scoreline.

India's wrestling campaign starts with the prodigious Sonam Malik taking the mat in the 62 kg Round of 16. Sonam had got the better of Sakshi Malik, the Rio 2016 bronze medallist, to make the Indian squad for Tokyo 2020. She has a tough opener against Asian Championships silver medallist Bolortuya Khurelkhuu of Mongolia.

Women's national record holder (63.24 metres) Annu Rani will test her javelin throwing skills on the Olympics stage for the first time. Annu also has a tough first round against Rio 2016 gold medallist Sara Kolak of Croatia. Kolak's best is 68.43m.