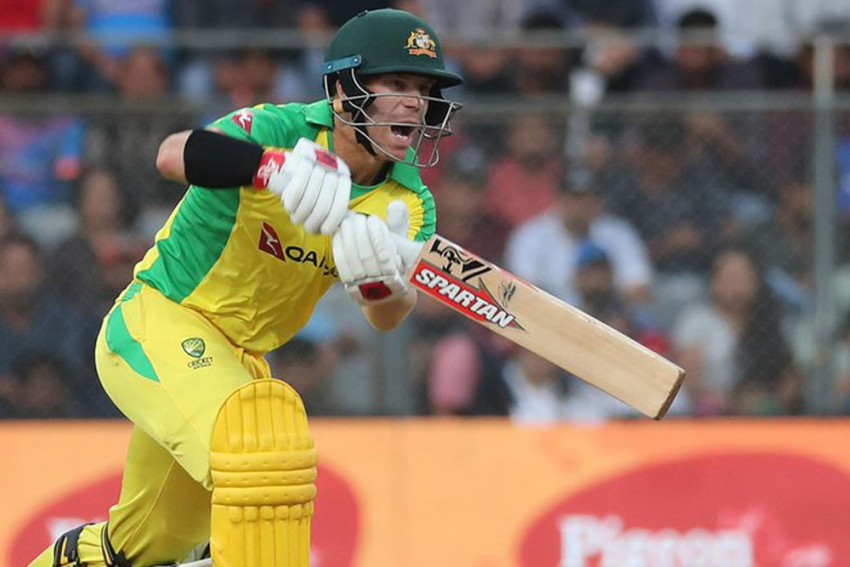 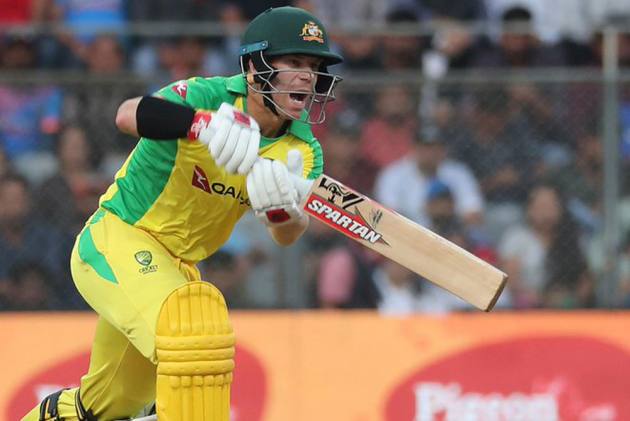 Australia cruised past India in the first ODI of the ongoing three-match series at Mumbai's Wankhede Stadium. The hosts set a 256 target after wrapping up at 255 (all out). Led by David Warner (128 off 112) and Aaron Finch (110 off 114), the Aussies won the match with 10 wickets and 74 balls remaining. Catch highlights of India (IND) Vs Australia (AUS) here

20:25 hrs IST: THAT'S IT!! Warner slams Shami for a consecutive four, placing it past mid-off. He runs and embraces Finch, and the duo do it in style. This is also the highest partnership for any wicket in ODI cricket against India.

20:14 hrs IST: THAT'S HIS HUNDRED! WHAT A CENTURY! Finch slams Jadeja for a four! It was down the leg side. Finch swept it, and ran to Warner for a punch on the gloves.

20:08 hrs IST: SECOND CONSECUTIVE FOUR!! Bumrah bowls a slower ball, but outside off. Warner powers it between extra cover and mid-off.

19:45 hrs IST: A length ball by Jadeja. It spins back a bit and Warner mistimes it. No run.

19:29 hrs IST: SIX!!! Warner skips down the track and slams Yadav's ball for a six, which clears the boundary with ease.

19:16 hrs IST: Another good over, but without any wicket. Jadeja has been good with the ball, confusing Finch, but hasn't been able to claim a wicket.

19:11 hrs IST: India still haven't been able to scalp a wicket yet. Although this wasn't an expensive over, with Yadav only conceding a four, but lack of a wicket could cost India the game.

18:54 hrs IST: A top over by Kuldeep Yadav once again. The Chinaman just concedes a single in the over.

India still haven't been able to claim any wicket, and this could really hurt them!

18:41 hrs IST: Excellent over by Kuldeep Yadav, as he concedes only three singles. India still need to grab an early wicket, and haven't been able to do that yet!

18:29 hrs IST: FOUR!!! Finch slams Shami for four runs. It as a short length delivery with some width. But Finch puts it past point and cover-point.

18:18 hrs IST: No run. Finch swings away and drives the Thakur delivery to cover.

17:49 hrs IST: Shami to Finch. Four runs! It takes the outside edge as he aims for the drive. Along the ground towards the third man.

17:17 hrs IST: OUT! Richardson sent a length ball at the stumps, Shami got a top edge but it behind for Carey to catch it.

17:15 hrs IST: OUT! It was Starc to Shami, but the Indian just steered it backwards towards Smith and went for a run. It was direct hit for Smith and Yadav had to walk back.

17:08 hrs IST: A good over by Richardson, as he conceded only 3 runs. Shami couldn't do much due to the quality of the deliveries.

16:55 hrs IST: OUT!! Starc kills it with the yorker, as Shardul goes back to the pavilion.

Now its Yadav's turn to contribute to India's total.

16:47 hrs IST: OUT!! Cummins puts in a short delivery at Pant, who goes for the pull. But it hits the top edge of his helmet and lobs towards point. It was an easy catch for Turner.

16:40 hrs IST: OUT!! It was a length ball by Richardson, which bounces extra as well. Jadeja tries to run it down towards the third man, but hits the ball near the shoulder of his bat. It was an easy catch for Carey.

In comes, Shardul Thakur to join the batting action.

16:25 hrs IST: NOT OUT!!! The umpire reviews his decision, and judges Jadeja as not run out. India get 2 runs. A quick runner between the wickets. Jadeja dragged his bat past the crease before the Richardson throw hit the wickets. Bad luck for Cummins.

16:12 hrs IST: SIX! Jadeja had all the time in the world and simply swung his arms to send Agar's delivery flying for a six over deep midwicket.

16:01 hrs IST: AMAZING DELIVERY BY STARC!! Iyer gets caught out. It was a length ball angling away, and it snicked past the outside egde for the wicketkeeper.

In comes Jadeja. Can he anchor his side's batting display?

15:51 hrs IST: OUT!!!!! Zampa sends Kohli back to the pavilion after the captain hit him for a six. Oh dear, bad news for India.

It was a good ball, floated hard around off. Kohli couldn't keep it away from Zampa, who caught it sharply.

In comes Rishabh Pant, with over 100 deliveries left. Enough time for the youngster!

15:39 hrs IST: OUT!!! A misplaced and mistimed shot by Dhawan off Cummins. It lofts into the air, and diving Agar catches it.

15: 32 hrs IST: OUT!!! KL Rahul walks back to the pavilion after chipping a length Agar delivery in the air. Smith was on the receiving end at cover.

The crowd has gone roaring as Virat Kohli walks into the field!

15:08 hrs IST: Dhawan takes single. He punches Agar's flat delivery towards long-on. Good partnership by Dhawan and Rahul, they have built a good stability for the home side.

15:01 hrs IST: DHAWAN REACHES HIS 50!! Zampa bowls to Dhawan, who hits it towards long leg for a single.

14:49 hrs IST: FOUR RUNS!!! Down the leg side, and Rahul places it at the left off fine leg with a roll of wrists off Richardson's delivery.

14:37 hrs IST: Excellent shot by Rahul off Richardson. The ball just flies away towards the boundary for a four. It was a length ball around off, punched square off the wicket.

14:19 hrs IST: FOUR!!! Dhanwa slams Cummins for a four! It was fuller delivery around off. Dhawan hit it past a diving Warner at mid-off.

14:12 hrs IST: FOUR!!!! Starc bowls to Dhawan, who flicks it in the air and hits. A flying Labuschange misses it at short midwicket, but the shot has enough power to make it to the boundary.

13:58 hrs IST: OUTT!! Starc sends Sharma back to the stands. What a delivery. Warnes was the one who caught it at mid off. It was a cross seam delivery, which angled away from Rohit. He tried to loft it but went for it a little too early. Warner was the end of it.

13:36 hrs IST: ABSOLUTELY GLORIOUS DISPLAY BY ROHIT SHARMA!! The Mumbaikar slams two fours, to make it eight runs in the first over off Mitchell Starc.

13:34 hrs IST: Starc bowls the first delivery of the match. And its Rohit Sharma at the other end. FOUR RUNS!!! WHAT A SHOT!! The delivery was a little bit outside the off stump, and Rohit just exquisitely hit it through the covers off the mark with a boundary.

13:18 hrs IST: Also, under the spotlight, Marnus Labuschagne is set to make his ODI debut after shining in the Test format. He will become his country's 229th ODI cricketer.

12:40 hrs IST: Meanwhile, former Australia captain Ricky Ponting believes Team India will be keen to "redeem themselves" but Aaron Finch's men will be able to beat the hosts in the three-match ODI series beginning today.

12:23 hrs IST: The match could be a battle between two pace attacks. India will be led by Jasprit Bumrah, Mohammed Shami and Navdeep Saini, Meanwhile, Australia will rely on Mitchell Starc, Pat Cummins and Kane Richardson.

12:08 hrs IST: There is a big chance that Virat Kohli could go down the order to accommodate both Shikhar Dhawan and KL Rahul. The Team India captain revealed, "There might be a possibility that all three (Rohit, Shikhar and Rahul) might play. It will be interesting to see what balance we want to take in on the field."

12:02 hrs IST: In other news, Virat Kohli asserted that India are ready to play day/night Test in Australia later this year, giving in his trademark manner, a counter to Tim Paine's cheeky dig.

11:38 hrs IST: Good morning everyone and welcome to Outlook's live coverage of the 1st ODI between India Vs Australia, being held at Mumbai's Wankhede Stadium.

Ravi Shastri's team will be relying heavily on its pace attack consisting of Jasprit Bumrah, Mohammed Shami and Navdeep Saini. Meanwhile, Rohit Sharma and Virat Kohli could take up important roles in the batting order but will be up against the pace and guile of Mitchell Starc, who will be playing his first ODI after making his debut in India in October 2010.

For Australia, Pat Cummins, who is also the IPL's costliest foreign acquisition will lead a pace attack consisting of Kane Richardson and Starc, who last played an IPL game in India in 2015. Starc and Cummins have plenty knowledge of Indian conditions and much of India's performance will depend on how the batsmen deal with this fearsome Aussie duo.

India also have a selection dilemma between Shikhar Dhawan and KL Rahul, although Kohli had earlier suggested that both could start with the captain going down the order. If current form is considered, then Rahul could be the one partnering Rohit, but Dhawan's record in international colors can't be ignored, especially since his century had won India the 2019 ICC Cricket World Cup fixture against the Aussies.

"It's a good dilemma to have. Rohit is an obvious choice of course. Both of them Shikhar and Rahul are playing well. Shikhar has done well in ODIs (and) Rahul is in great form. The management will sit down and make the choice. I don't see it as an issue and one of them will have to sit out, so that's okay," batting coach Vikram Rathour had said on Sunday.

Meanwhile, the young charismatic Marnus Labuschagne will be the man to watch in the Australian batting line-up that is studded with plenty of experience and power. Labuschange is in great form and it will worth seeing how he handled the Indian attack in Mumbai's humid conditions.

The match could be a run fest. Since 2013, India and Australia have met 28 times. There have been 25 scores in excess of 300 (14 by Australia and 11 by India). There have been eight scores above 350 and on three occasions, totals above 350 have been chased down, according to ESPNCricinfo. The average first-innings score is 304.