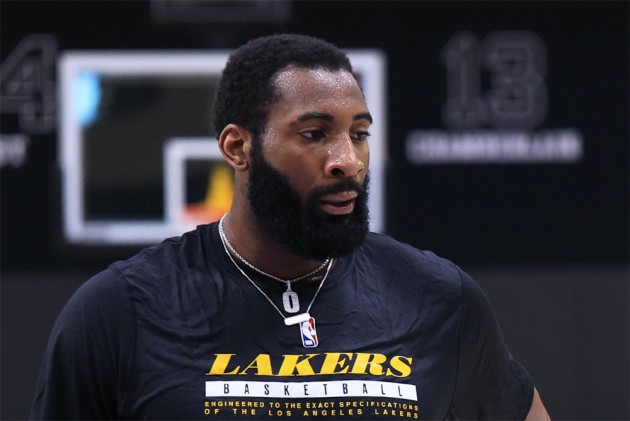 Los Angeles Lakers recruit Andre Drummond said he is ready to help the NBA champions in pursuit of back-to-back titles, while he highlighted the prospect of a "crazy" defensive trio alongside superstars LeBron James and Anthony Davis. (More Sports News)

Drummond joined the Lakers on Sunday after clearing waivers, having agreed to a contract buyout with the Cleveland Cavaliers last week.

The two-time All-Star, however, has not played since February 12 after he and the Cavaliers agreed he would be shut down until a trade or buyout was completed, following the arrival of younger center Jarrett Allen.

Drummond, though, insisted he is ready to play for the Lakers.

"I'm here to help this team win as many games as possible."

Showing the new guy around. pic.twitter.com/J7QuHF5hZZ

"It's been almost a month [and] 10-plus days since I last played. You can imagine the hunger and excitement I have to play and step on the court," he said.

"I had an incredible month of work where I'm ready to play today."

Drummond's arrival is a boost for the Lakers (30-17), who are fourth in the Western Conference as superstar duo James (ankle) and Davis (calf) are sidelined.

The Lakers have only once scored above their seasonal average of 110.7 points since James went down, missing their leading two scorers (James 25.4 points per game, Davis 22.5).

But Drummond had 17.5 points up until February 12, when Cleveland agreed he would be shut down, which would put him third on that list.

Andre Drummond has a message for the Lakers Family pic.twitter.com/qLblIuRUm3

"I think our defense is going to be really crazy when those guys come back. And I'm looking forward to it," Drummond added.

"My defensive game is going to help this team out a lot with my quick feet, quick hands," he continued. "Going to be able to recover and play one through five.

"I think for me coming here, AD could slide to the four and play his true position and be very good at it without taking all the bumps and bruises I do at the five."