Mesut Ozil said he would rather than quit than sign for Tottenham, but Jose Mourinho had a sharp response for the Arsenal midfielder 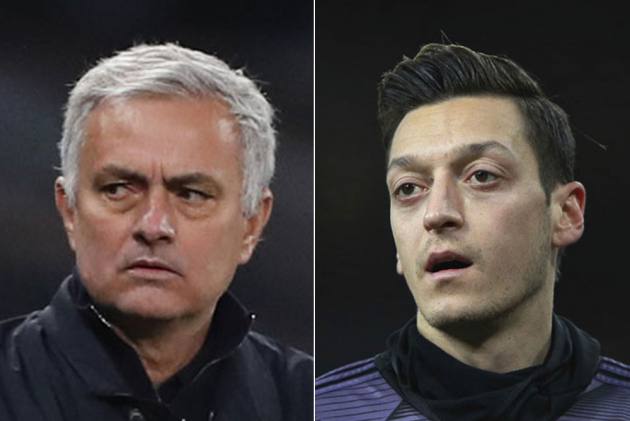 Jose Mourinho made a sharp quip in response to Mesut Ozil's dig at Tottenham and says there is no chance Harry Winks will be allowed to leave this month. (More Football News)

Ozil on Monday stated in a Twitter question and answer session he would rather retire than sign for Arsenal's fierce rivals Spurs.

Tottenham boss Mourinho had a short, sharp reaction to the out-of-favour former Germany international's social media post in a news conference ahead of the London derby at Fulham on Wednesday.

"Who told him that Tottenham would be interested in signing him?" the Portuguese, who coached Ozil at Real Madrid, said after rubbishing a link with Stuttgart winger Nicolas Gonzalez.

Mourinho also denied Winks could be on the move amid reports that the midfielder wants a switch to Spain, with Valencia said to be interested in a loan deal for the England international.

"He played the last matches. He didn't play the last one because it was a chance to let players like Gedson [Fernandes] get minutes. Tomorrow he's selected again. If someone's talking to other clubs I'd say don't waste your time."

Spurs were due to face Aston Villa in midweek, but it was announced on Monday they will head to Craven Cottage instead due to a coronavirus outbreak in Dean Smith's squad.

Tottenham had a clash with Fulham called off at the end of last month at the eleventh hour as a result of positive tests returned at the South-West London club.

Mourinho, who has not decided whether Erik Lamela will feature after his breach of COVID-19 protocols, has no problem with the change of schedule in the circumstances.

"If this will help the Premier League to end properly I think it is a solution we all have to accept as a positive solution."