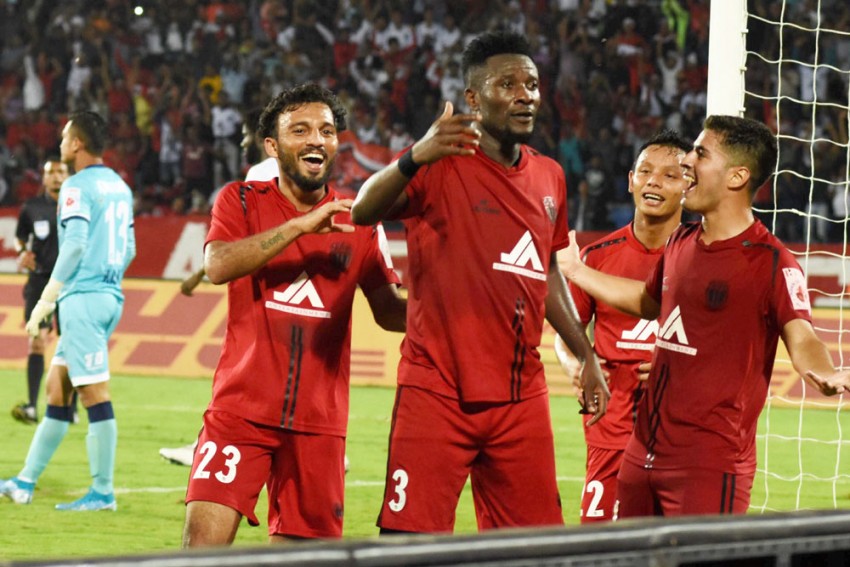 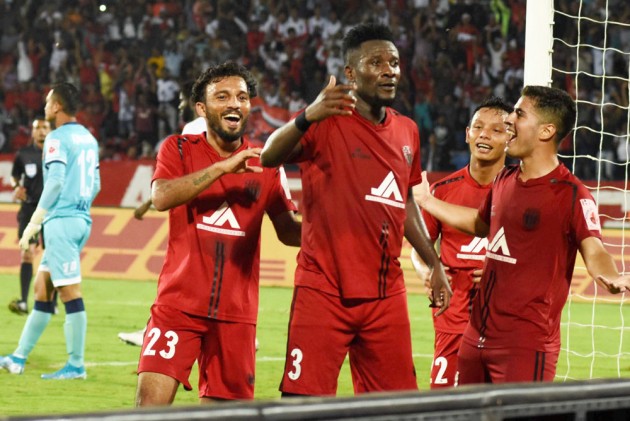 FC Goa came up with yet another injury-time equaliser to salvage a point against NorthEast United FC in a thrilling 2-2 draw in an Indian Super League (ISL) encounter at Guwahati on Friday.

FC Goa also played out a 1-1 draw with Bengaluru FC in their previous match.

But despite a late red card to Seiminlen Doungel, Manvir Singh bagged a late equaliser and a point for Goa.

NorthEast United were the first to threaten the goal when Milan Oinam found Gyan at the edge of the box and the Ghanaian forced a good save from Mohammad Nawaz.

The game was played from one end to another and Boumous was denied by the crossbar minutes later.

Ahmed Jahouh found Ferran Corominas, who released Boumous into the box but the Frenchman's thunderous strike struck the woodwork.

However, Boumous was not to be denied in the 31st minute. In a move that oozed quality, Brandon Fernandes played an excellent first-time through-ball off Corominas' lay-off to feed Boumous in behind the NorthEast defence.

The midfielder skipped past the onrushing goalkeeper Subhasish Roy Chowdhury and calmly slotted into an empty net.

NorthEast stepped up their efforts to find a goal and Gyan spurned two big chances to pull his team level in the first half.

First, Mourtada Fall misplaced a simple pass into the feet of the forward but his shot from the edge of the box was hit straight at the goalkeeper. Five minutes before the break, the Ghanaian's header was well saved by Nawaz.

Gyan made his mark soon after the re-start by scoring the equaliser. The striker, cashed in on Fall's failure to intercept a Rakesh Pradhan's through-ball. He latched on to the pass inside the box and curled a neat strike past Nawaz into the net.

As the visitors tried to regain their lead, Subhasish pulled off a brilliant double save to keep his team in the game soon after the hour-mark.

First, Corominas played Jackichand Telem through into the box and the winger's powerful effort was kept out by the diving goalkeeper.

The rebound fell to Corominas lurking inside the box but Subhasish got up in time to block the Spaniard's shot from close-range.

NorthEast's second-half intensity was rewarded in the 74th minute. Martin Chaves ran down the left-flank and produced an accurate low cross for Redeem Tlang whose magnificent first-time strike left Nawaz rooted to the spot and put the home side into the lead.

There was drama right at the end as Doungel's poor tackle on Chaves was punished with a red card.

But a 10-man Goa found joy in injury time when a free-kick into the box was flicked across goal by Fall. Manvir rose highest in the centre of the box to nod the ball in and give his side a point.