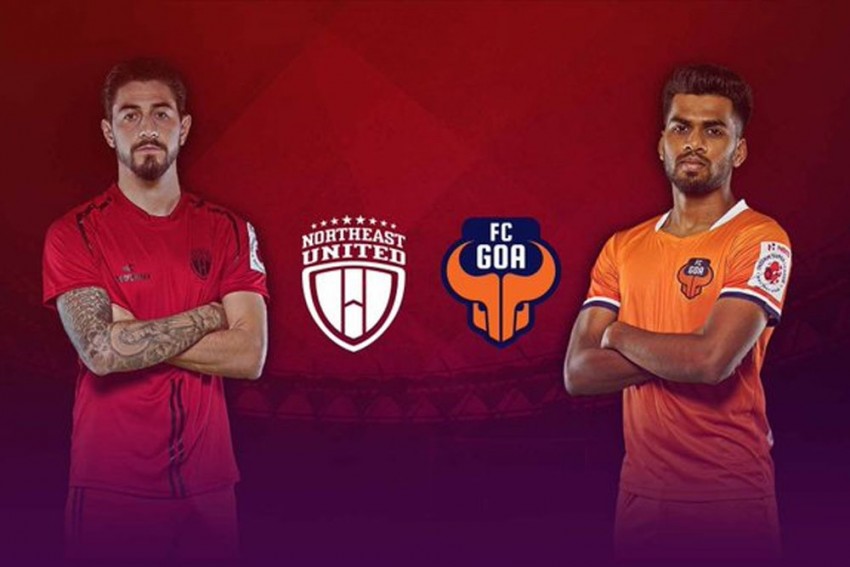 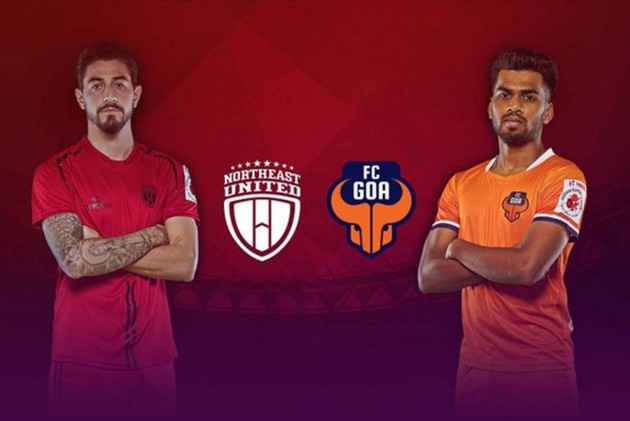 A very, very late goal from super-sub Manvir Singh salvages a point for FC Goa against NorthEast United in a keenly contested contest in Guwahati. It could have gone horribly wrong for both the sides, but the referee Ramaswamy Srikrishna controlled when it was getting out of the hand. And soon, FC Goa found the equalier with Manvir Singh from the restart. Seminlen Doungel, who served  Northeast United with all his heart, turned up for the visitors late in the second half and kicked Martin Chaves while trying to retrieve the ball in a dead ball. Then, all hell broke loose. Players and support start involved in the fight, a red card for the player, then again, another fight. But the visitors took 'advantage'. Besides that, the match also witnessed some brilliant moves and cool finishes including those of Hugo Boumous and Asamoah Gyan. But the hero of the match was Redeem Tlang. Brilliant show from the emerging player. Both the teams remained unbeaten.  We have Hyderabad vs Kerala Blasters tomorrow. And that's all for tonight.

90+6' - GOAL! Manvir Singh heads home the equaliser from a long ball with Mourtada Fall getting the first touch.

90+2' - Jose Leudo wins a free-kick some 20 yards away from FC Goa goal, and he forces Mohammad Nawaz to produce a brilliant save.

90' - Throw-in for NorthEast, but FC Goa end up winning the ball and an attack, and a corner. Five minutes added on.

88' - Saviour Gama, just arrived, produces a blistering run inside the NorthEast box. But Jose Leudo wins the ball and clears the threat away. Then, Brandon Fernandes tries a long ranger. Nothing from it.

86' - A brief stoppage. Milan Oinam on the floor. Meanwhile, both the managers are giving fresh instructions from the touchline.

82' - Subhasish Roy is fine and goal-kick for NorthEast. Free-kick to Goa as Asamoah Gyan's flailing hands hits an FC Goa player. And soon, he's been subbed. Argentinean Maximiliano Barreiro is on.

80' - Rakesh Pradhan makes an important interception to deny the ball to lurking Jackichand Telem. But the danger is still there for NorthEast United. Then, almost the second equaliser. Ferran Corominas hits the upright. And Subhasish Roy hits the post with his shoulder. Injured. Or, killing time.

77' - Sub for FC Goa. Lenny Rodrigues out, Seminlen Doungel in.

76' - FC Goa on a brilliant move. Hugo Boumous links with Coro, then Ahmed Jahouh goes for a long ranger. Straight to Subhasish Roy.

73' - Brandon Fernandes, looking for his options, fails to keep the ball in possession. Throw-in for NorthEast.

67' - Ferran Corominas tries to wriggle his way through the defence, but fails and Milan Oinam launches an attack. In the counter, Jackichand Telem forces a brilliant save from Subhasish Roy, then another one, this time with his leg, as Hugo Boumous follows up with another attempt.

65' - Hugo Boumous unmarked, but Reagan clears the threat with his header. From the following play, Ahmed Jahouh goes for a long ranger. Very good one but Subhasish Roy's up to the task.

63' - Heerings Kai body checks Brandon Fernandes while going for a high ball. Moments ago, Reagan sends in a cross. But an FC Goa defender blocks it.

61' - The side which keep the calm will win this clash. Free kick to NorthEast after a foul on skipper Jose Leudo, by Ferran Corominas. It was a yellow. Pulling shirt.

60' - This clash is turning into a fight. Lots of late tackles and pushing and shoving. No respite for the referee Ramaswamy Srikrishna.

58' - Redeem Tlang booked for a nasty foul to Ahmed Jahouh.

55' - And withing seconds, FC Goa almost score a second. Hugo Boumous finds Coro with a beauty of a pass, then the Spaniard misses the target by a whisker!

52' - GOAL! It's got to be him. Asamoah Gyan! What a goal from the legend. Pressure and produces the equaliser with a brilliant finish. This is what the best in the business do. A glance to measure the positioning and curls in, to the far post. Kudos to Jose Leudo for his pass.

52' - FG Goa still biding their time, waiting for the right opening, to increase the lead. Free kick for NorthEast though inside their own half.

50' - FC Goa players happy to roll the ball around, then suddenly a move. Jackichand sends in a cross and saved by Subhasish Roy.

45' - Reagan trips Brandon Fernandes, and the FC Goa forward is not happy that the referee doesn't flash the card. Northeast United pressed hard after winning the ball back. Nikhil Kadam tries to find a NorthEast player with his cross. Two minutes added on.

44' - Redeem Tlang, who missed a tap-in minutes ago, earns a corner from his bullet attempt. Nikhil Kadam's corner cleared by Ahmed Jahouh.

42' - Another brilliant cross from Reagan and Asamoah Gyan's header just misses the target. What a game.

40' - Heerings Kai takes a very quick free-kick, but intercepted by a FC Goa. Then, on the counter, Mohammad Nawaz produces a diving save. Corner not given, somehow. This is end-to-end stuff. No breathing space.

35' - Ferran Corominas tests Subhasish Roy from close range. Brilliant save to deny that rifle of a shot. Moments ago, Asamoah Gyan fails to beat a diving Mohammad Nawaz. What an exchange of blows.

29' - Redeem Tlang involved in another tussle, concedes a foul for his tackle to Brandon Fernandes. Mandar Rao Dessai, too optimistic. Going from some 35 yards and the ball sails over the bar.

28' - After a very good spell, Redeem Tlang wins a corner, forcing a deflection from FC Goa captain Mandar Rao Dessai, who turns his back to the ball. It could have gone anywhere.

26' - Jackichand Telem tried to find one of his teammates inside the NorthEast box, but his cross only manages to roll.

23' - Captain Mandar Rao Dessai involved in a very looking play. He tries to find Ferran Corominas inside the box, in vain. Then, rival captain Jose Leudo then wins a one on one fight for the ball against Hugo Boumous. French-Moroccan still on the ground.

21' - Ahmed Jahouh loses the ball to Martin Chaves and commits a foul. Free-kick for NorthEast. Then a goal-mouth melee followed.

19' - Ahmed Jahouh finds Jackichand Telem after a frenetic clearance from Mohammad Nawaz, who was hounded by a NorthEast player. Then, another attempt on the goal for FC Goa. But off target.

18' - Ferran Corominas is relatively quiet tonight. Martin Chaves demands a yellow card for an FC Goa player who pushed him from behind.

16' - Martin Chaves wins a free-kick courtesy a sliding tackle from Seriton Fernandes. NorthEast United opt to roll the ball instead of delivering with a direct pass. On the counter, Hugo Boumous hits the crossbar. Lucky, NorthEast.

14' - Asamoah Gyan beaten in the air by Mourtada Fall. Two towering players fighting for the ball. FC Goa trying to rebuild their attack.

12' - Poor delivery from the flag, but from the deflection, Ahmed Jahouh tries a long-ranger. No threat to Subhasish Roy.

11' - After a good spell, NorthEast do the defensive work with  Nikhil Kadam chasing down a quick counter-attack from Goa. The visitors end up earning a corner.

9' - NorthEast United close down Goa defence and Asamoah Gyan gets his first attempt on target. Easy for Mohammad Nawaz.

8' - Mourtada Fall is shadowing Asamoah Gyan, and conceded a foul. Free kick to NorthEast United. A very good delivery from Martin Chaves, who tried to find Redeem Tlang near the far post. Mohammad Nawaz was alert.

7' - Rakesh Pradhan asks for a foul after slipping his footing inside the final third. No call from the referee.

5' - Brandon Fernandes gets a very good long pass, then cuts inside from the right flank. But Fernandes' cross fails to find his teammate.

4' - Captain Jose Leudo wins the ball back in the centre of the midfield for Northeast. But the hosts soon lose possession and Jackichand Telem almost delivers a cross but a timely tackle from a host defender.

2' - Brandon Fernandes is pulled back at left flank by Reagan, using both his arms and first foul of the match.

1' - What a chance for Brandon Fernandes. FG Goa forward mistimes his kick from an early attack.

7:25 PM IST: Players are out. Ready for National Anthem.

NorthEast United played out a goalless draw with champions Bengaluru FC, then beat ten-man Odisha FC 2-1 at home. FG Goa thrashed two-time champions Chennaiyin FC 3-0, then played out a 1-1 draw with Bengaluru in the last season's final replay at home.

During the pre-match press conference, the home side's head coach Robert Jarni stated that his team can cope with FC Goa. "I've played against strong teams with fast players in the past. But there’s always a plan to counter that. We have to be mentally strong and we have to concentrate 100% for the 90 minutes. We also have to be smart in the pitch to make things difficult for them," he said.

After a good start to the 2019-20 Indian Super League season, NorthEast United and FC Goa face each other at Guwahati's Indira Gandhi Athletic Stadium, on November 1, 7:30 PM IST.

The home side will eyeing for a good result against a team, boasting the likes of Ferran Corominas, Brandon Fernandes and Jackichand Telem. Both sides have registered a win and draw, but the hosts are currently fourth with the visitors at the third spot (due to goal difference).

The Highlanders have a fully-fit squad without any injuries and suspensions for their upcoming fixture against last year's runners-up. Panagiotis Triadis, who has shone for his side until now, could be pushed to the bench, due to the selection of another foreigner – Mislav Komorski – in the heart of defence.

Meanwhile, the Gaurs also have a full roster. Edu Bedia and Hugo Boumous could start against NorthEast after not having much part to play in the previous two fixtures.