All-rounder Kieron Pollard smashed 87 off only 34 balls in a dramatic victory for the defending IPL champions. 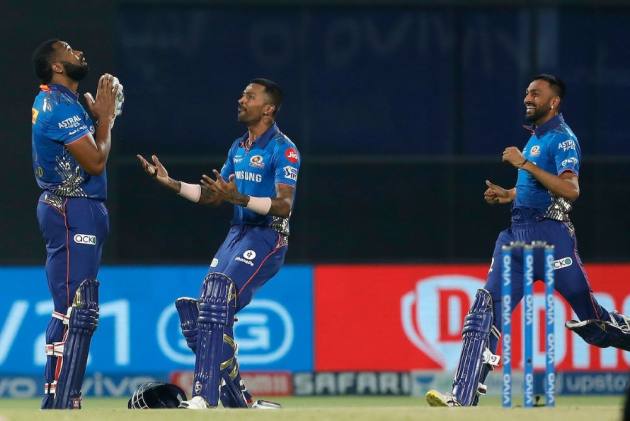 However, the defending champions handed the Super Kings just a second loss of the 2021 season, reaching their target from the final delivery with four wickets to spare as Pollard accepted the responsibility of seeing his team over the line in astonishing fashion.

The West Indies international smashed eight sixes as he finished up unbeaten on 87 from just 34 balls. He hit the penultimate delivery of the contest for six off Lungi Ngidi, then managed to sneak through for the two runs required from the last.

Pollard was dropped by Du Plessis in the 18th over and that proved to be costly for leaders CSK in a dramatic contest at Arun Jaitley Stadium in Delhi.

Quinton de Kock (38) and Rohit Sharma (35) had put on 71 for the first wicket in 7.4 overs, but the openers were dismissed by Moeen and Shardul Thakur respectively before the halfway point of the run chase.

Pollard stepped forward to pull off Mumbai's highest chase, though, with the Indians taking 48 runs off the last three overs to move just two points behind CSK in fourth place.

Chennai endured a mid-innings wobble – slipping from 112-1 to 116-4 after losing two wickets in as many balls in a Pollard over - but Rayudu's onslaught carried them well beyond the 200 barrier.

Jasprit Bumrah was one of the bowlers who suffered the most. The India international finished with figures of 1-56 from his four overs, the highest number of runs he has conceded in the format.

Mumbai were 81-3 in the 10th over when Pollard arrived at the crease to produce an incredible display of clean striking, racing to a 17-ball half-century.

Sam Curran removed Hardik Pandya and Jimmy Neesham in the penultimate over after the England all-rounder had trapped Krunal Pandya leg before. However, it was not enough for Chennai.