After De Villiers batted like a superman, Navdeep Saini bowled a tight super over for RCB against the marauding Kieron Pollard of Mumbai Indians. Virat Kohli showed his trademark fist-clenching aggression and broad smile after Royal Challengers Bangalore clinched a super over victory against Mumbai Indians in a thrilling IPL 2020 match in Dubai on Monday night. But for that Kohli must thank his young pacer Navdeep Saini for bowling a tight super over that restricted MI to a paltry seven runs.

Kohli has had an indifferent IPL 2020 so far. In three matches, the RCB skipper has scores of 14, 1 and 3. On Monday in Dubai, Kohli, in the company of the evergreen AB de Villiers, hit the winning runs and it brought him a sense of relief more than anything else.

Most parts of the RCB vs MI match, Bangalore were in an advantageous position until Ishan Kishan and Kieron Pollard hammered the RCB attack to force a super over in a 200-plus match.

Navdeep Saini was RCB's hero. A combination of low full tosses and yorker length balls, restricted the belligerence of a Pollard and Hardik Pandya. Kohli too set the fielding to perfection so that runs didn't leak.

"Outstanding Super Over from him (Saini), bowling against Hardik (Pandya) and Kieron Pollard. I think the longer boundary helped him gain some confidence with his yorker, because he has got the pace and then he was using the wide yorker well too," Kohli said in a post-match chat.

"The guys showed real good composure to get these two points in the bag and very crucial points at early stages of the tournament," Kohli added. RCB have two wins from three matches so far and are third in the points tally. 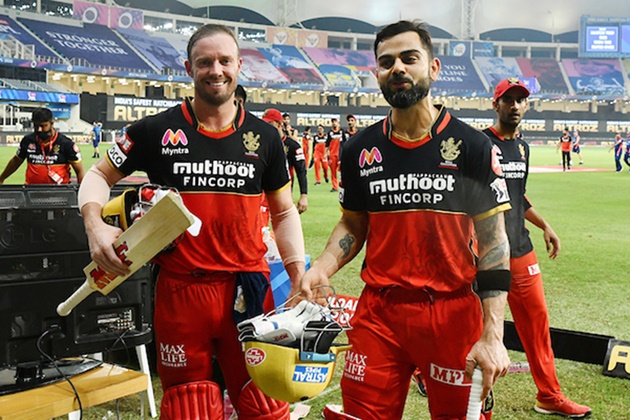 RCB captain Virat Kohli and AB de Villiers after the Super Over win vs Mumbai Indians in Dubai on Monday night. Credits: BCCI

Kohli wants to be De Villiers

Kohli was all praise for AB de Villiers. Time and again the South African has proved to the cricket world why he is called the 'superman.'

On Monday, De Villiers blasted an unbeaten 55 off 24 balls that took RCB to a daunting 201 for three. It was De Villiers' second fifty in three games.

"I wish I was AB to be honest (chuckles). He was coming after a long break. The way he batted and some of the shots he played was outstanding. Getting stuck into the bowlers and only he can do that best.

"He keeps things simple and doesn’t watch a lot of cricket. Enjoys his life and comes out here, backs his ability. He’s relaxed and that's exactly what we want from him," Kohli said after the match.

The win against Mumbai Indians should act like tonic for RCB going forward.