Captain MS Dhoni admitted to CSK's failure after the three-time IPL champions suffered their seventh defeat, which surely ended their hopes of reaching the IPL 2020 play-offs 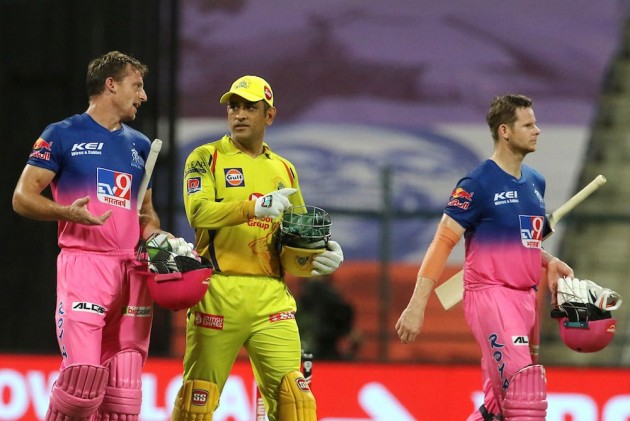 Only a miracle can save Chennai Super Kings' (CSK) season after suffering their seventh defeat in the Indian Premier League (IPL) 2020 on Monday. For all the pride and past glories, CSK, and up to some extent MS Dhoni as their primordial captain, winning just three in ten outings is as shambolic as it can get. And rightly, the skipper, who has orchestrated CSK's win umpteenth times, conceded the fall when he said that they "play in front of millions of people so there is nothing to hide."

That remark, as told to the official broadcasters of IPL just after rival captain Steve Smith hit the winning runs in Abu Dhabi, was as painful as the manner in which the three-time champions played. They were outplayed by a more determined side, with a certain Jos Buttler easing his way through the impregnable Chennai wall. Then, like the fall of a colossus, Dhoni tried to control the narrative. He said, it's all about process! Well, process, it is.

Dhoni added: "It's not always supposed to go your way. That's why what we try is going back to the process and see if the process is wrong or maybe we weren't able to execute. Result is always a byproduct of the process. What it does is it helps you think in a positive way."

Maybe he's right. It's all about the big process.

Elsewhere, other teams are also following their own process with more favourable results.

The result left the Chennai-based franchise with the impossible task of making the play-offs. If they fail to do, it will be the first time in their history. Yes, discounting the two seasons they were banned for...

The maximum point that they can get now is 14, two for each win. But worryingly, three teams have already accrued 12 or more points -- Delhi Capitals (14), Mumbai Indians (12) and Royal Challengers Bangalore (also 12) -- after nine rounds. Then, there are Kolkata Knight Riders on 10 after an equal number of outings.

Summing up CSK's predicament, the former India captain, who revolutionised T20 cricket by leading India to the inaugural World Cup triumph in 2007, talked about uncertainty. Indeed, a frightful day for the sport. "Insecurity is something you don't want to prevail in the dressing room. Fair enough, this season we weren't really there," the 39-year-old added.

But for Smith, who also struggled to score runs like Dhoni, the result was a result of "building a lot of pressure". The former Aussie skipper added, "[Jos] Buttler took the pressure off me. I just knocked it around, and he just batted the way he usually does."

Indeed, Buttler was the one who did the damage after Rajasthan bowlers restricted Chennai to 125/5. The self-effacing wicketkeeper-batsman, who remained unbeaten on 78 off 48, was modest in his assessment. "You have to keep trusting yourself and particularly when there's no scoreboard pressure, you can play yourself in and let cut loose in the end," he said, giving credit to Rajasthan bowlers.

Buttler's English compatriot Jofra Archer (1/20) led the charge with a tidy spell, with Shreyas Gopal (1/14) and Rahul Tewatia (1/18) backing his fast bowling with their spin bowling.

"The spinners bowled good lengths, with the googlies and leggies, building a lot of pressure. Tewatia and Shreyas have been sensational for us," Smith added.