SunRisers Hyderabad, by eclipsing Rajasthan Royals' 198/2, registered their highest successful run chase in the history of the Indian Premier League 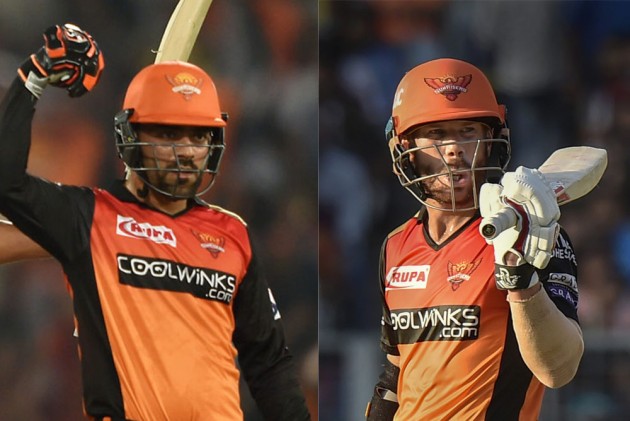 Rajasthan Royals' (RR) Sanju Samson became the first batsman to hit a century in the Indian Premier League (IPL) 2019, but it became something of a footnote to the scorecard of SunRisers Hyderabad's highest successful run chase in the history of the league on Friday.

Last year's runners-up and 2016 champions SRH chased down RR's intimidating total of 198/2 with six balls to spare to register a five-wicket win over the visitors at the Rajiv Gandhi International Cricket Stadium, Hyderabad. This was the third time, joint most with Royal Challengers Bangalore (RCB), that SRH have chased down targets of 199 or more in IPL.

Former captain and redemption-seeking Aussie batsman David Warner (69 off 37), who hit his second half-century in two matches, found a perfect opening partner in England's Jonny Bairstow. The wicketkeeper-batsman was more than happy to play the second fiddle as Warner launched the attack on visiting bowlers from the start. After the departure of Warner, he took over the role of an enforcer, hitting 45 off 28 balls.

Warner's knock became even more special as he celebrated the end of a year-long ban for the ball-tampering scandal in South Africa last year. But his 'partner in crime' Steve Smith, in the rival camp, was invisible as Ben Stokes got promoted ahead of him in the RR batting order. A good part of the build-up to the match was dedicated to the duo, considering the fact that both of them are using the cash-rich league as a platform to justify their 'imminent' return to the Aussie squad for the World Cup.

But the chase hit a road bump with leg-spinner Shreyas Gopal dismissing both Vijay Shankar (35 off 15) and Manish Pandey (1 off 4) in two balls in the 16th over. Those wickets proved as blessings in disguise for the hosts as the eventual man of the match award winner Rashid Khan (15 off 8 not out) joined Yusuf Pathan (16 off 12 not out) in the centre. The duo stitched an unbeaten 34-run stand for the sixth wicket to seal the victory.

The Afghan sensation, who produced the most economical spell in a match dominated by batsmen, hit the winning runs – an outlandish flick for a six off the last ball of the penultimate over, bowled by Jofra Archer. The Hyderabad innings also witnessed the brilliance of India all-rounder Shankar's hitting abilities.

But the chase made possible by a 110-run opening stand between Warner and Bairstow. Then Kane Williamson (14 off 10), who returned to lead the side, joined hands with Shankar to post 47 runs together for the third wicket. Then, Gopal threatened to derail the chase.

Earlier, RR captain Ajinkya Rahane (70 off 49) won the toss and opted to bat first. Playing an unchanged side from their loss to Kings XI Punjab (KXIP), the visitors lost Josh Buttler (5 off 8) early in the innings to a Rashid beauty. But the skipper and Samson (102 off 55) posted match-high stand of 119 runs to laid the foundation for a late onslaught.

And the flourish came in the form of Samson and Stokes (16 off 9), who put together 64 runs for the third wicket, with 63 of those coming in the last four overs.

Rahane himself hit a fluent fifty, but was overshadowed by the 24-year-old's maturity in constructing the innings. The Kerala batsman thus became the first batsman to hit two IPL centuries before turning 25.

Samson, who brought up his ton in the 20th over by hitting Bhuvneshwar Kumar for a four, made the most of a reprieve when he was dropped by Bairstow on 58 in the 17th over.

In the last over, Stokes came to the party by smacking Bhuvneshwar for two successive fours to get the home team close to 200-run mark.

But the target proved too little for a side powered by Warner, who only a few days ago hit a 53-ball 85 against Kolkata Knight Riders (KKR) in a losing cause. The hosts won the match with six balls to spare.

There remain worrying signs for the Hyderabad side though with pace spearhead Bhuvneshwar failing to impress for the second match in succession. He went wicketless, conceding 55 from his four overs. At Eden Gardens, he leaked 37 without success.

His pace partners Siddarth Kaul and Sandeep Sharma also missed the trick, going wicketless while conceding 32 and 38 runs respectively. Bhuvi was given special treatment by a relentless Samson, hitting the Indian pacer bowler for 24 runs in the 18th over, which included a six and four fours.

Next, both the teams will feature on Sunday double-header with SunRisers hosting RCB in the first match, while Royals travel to south India for a date with defending champions Chennai Super Kings (CSK).

After the end of second-round matches, KKR lead the table ahead of defending champions CSK on net run rate. Both the teams have two wins from two matches. Delhi Capitals, SRH, KXIP and Mumbai Indians have won one match win each – standing in that order. RCB are seventh, ahead of fellow winless side RR