India Vs West Indies, 2nd T20I Live Streaming: When And Where To Watch, Pitch And Weather Report, Likely XIs

IND Vs WI, 2nd T20I Live Streaming: How to watch the second Twenty20 International match between India and the West Indies and everything else you need to know about the Thiruvananthapuram clash -- pitch and weather report, predicted playing XIs, green protocol, etc 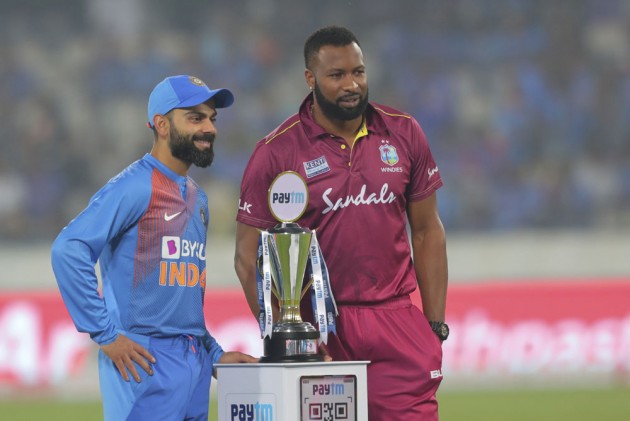 After a relatively easy win in the series opener at Hyderabad on Friday, courtesy skipper Virat Kohli batting masterclass, India will hope to take an unassailable 2-0 lead in the three-match T20I series against the West Indies.

Weather report: A clear day on the forecast with the temperature hovering around 30 degrees Celsius. Perfect day for cricket.

Pitch report: The average first innings score here is 132, but fans can expect the Sunday evening game to turn out to be a run-fest. Speaking to the media, Greenfield International Stadium pitch curator Biju said that two pitches have been readied and have been cleared by the ICC representatives.

"This is going to be a pitch where lots of runs can be expected. Even with likely rains, the pitch will favour the batsmen," said Biju.

This is the third international fixture at the state-of-the-art Greenfield Stadium, lying next to the Technopark campus and this has been a lucky venue for India as they have won both the matches they have earlier played at the venue.

Last year despite the rain, India comfortably defeated West Indies by nine wickets in an ODI played on November 1. Before that, the Men in Blue had defeated New Zealand by six runs in a T20I game on November 7, 2017.

Plastic warning: Green protocol will be in place at the stadium and no plastic material would be allowed on the match day.

"All the caterers have been informed about this and they will not be allowed to serve anything in plastic material, as the green protocol has come into place," said venue manager Vinod Kumar.

Local lad Sanju Samson, who was drafted late into the squad as the replacement for iunjured opener Shikhar Dhawan, has an outside chance to make the XI. For that happen, the team management will have to convince Rishabh Pant to take some rest.

Wicketkeeper Nicolas Pooran and Keemo Paul are likely to make a return, in place of Denesh Ramdin and Kesrick Williams respectively. Pooran was serving a four-match ban for ball-tampering.