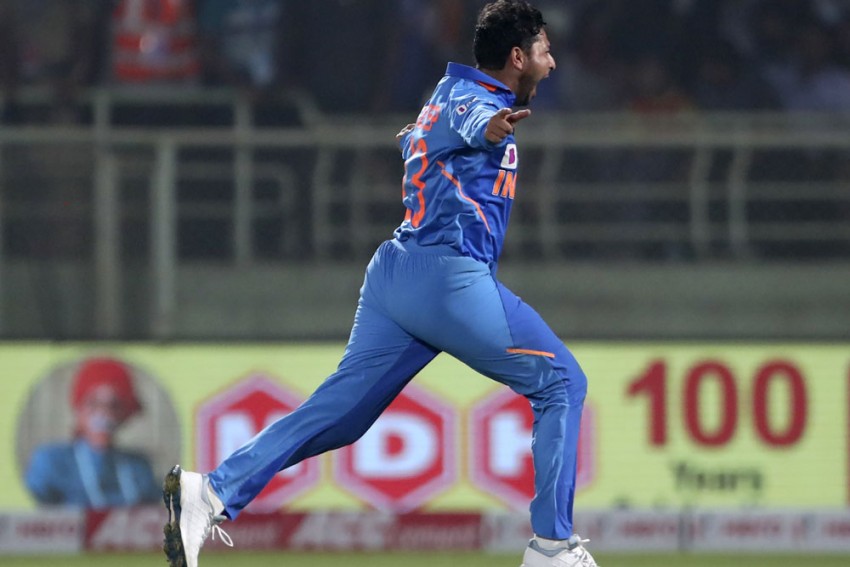 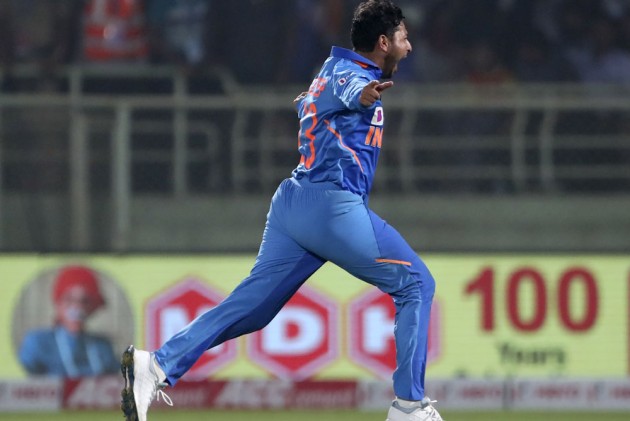 Kuldeep Yadav rates his hat-trick against West Indies in the second one-dayer on Wednesday as his best bowling performance as it came under pressure after a dip in form and exclusion from the national team.

Kuldeep, who was a permanent fixture from 2017 to early 2019, endured a slump starting from the last IPL and after a disappointing World Cup where he was in and out of the side, he was dropped for a good four months.

On Wednesday, he became the first Indian cricketer to claim two hat-tricks in international cricket.

"The last 10 months were very tough for me. After consistent performances, there comes a phase when wickets don't come by and you start thinking more about your bowling. After World Cup, I was dropped from the team, then I worked really hard for four months," Kuldeep said after his second international hat-trick in India's 107-run win against the West Indies.

He admitted that he was a bit nervous when he made a comeback in national colours after four months in the T20 International against West Indies in Mumbai.

"The T20 against West Indies in Mumbai was my first match for India in four months. I was a bit nervous as there was a bit of gap and I hadn't played international cricket during that phase. Performance wise, this hat-trick will be at the top of the list because pressure was on me and it was a result of 4-5 months of hardwork," he said.

Asked about what was going through his mind before the hat-trick ball, Kuldeep said that he was confused whether to bowl a wrong 'un or a conventional chinaman to Alzarri Joseph.

"I was a bit confused which one to bowl – the wrong 'un or the chinaman. I thought wrong 'un is the best option and I put a second slip there. I was thinking to bowl the off-middle line and if he misses then I will get the wicket. That was the plan," he revealed.

He didn't think that even during slump in form, he was bowling badly but needed a bit more planning on variation.

"I have worked on my variation, pace and accuracy which is why the pace that I have bowled in the last two ODIs had been great. The way I used my variations, I am very happy."

But it was not about a new variation but more about altering the pace of his deliveries according to the nature of the track.

"I think it is not about new variations but more about varying pace according to nature of the track. In India, the tracks are on the slower side and you need to mix it up – sometimes fast, sometimes slow. Worked with Bharat Arun Sir and Ravi sir, both motivated me," he said.

In the first ODI in Chennai, Kuldeep went wicketless for 48 runs but he feels that more than bad bowling it was good batting from Shai Hope and Shimron Hetmyer that changed the complexion of that match.

"We bowled well in Chennai also. I think at times, we should give credit to batsmen also. The manner in which Hetmyer and Shai Hope batted was praiseworthy. They paced it well. When they felt, they attacked, when they felt, they defended. There were obviously areas which we could have improved, and that's what we did over here."

He did not forget to mention that Visakhapatnam is his "lucky ground".

"It feels amazing to get a hat-trick in Visakhapatnam. I have now got nine wickets from three ODIs over here – all three wicket hauls. This ground has been good to me."