South Africa lost by an innings and 202 runs against India, enabling the home side to complete a 3-0 whitewash over their opponents at Ranchi. Here are the highlights of IND vs SA here 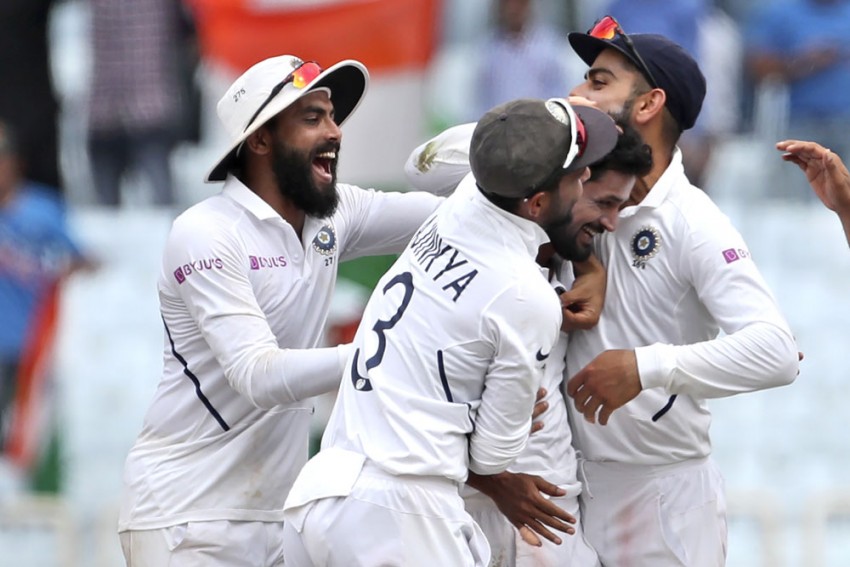 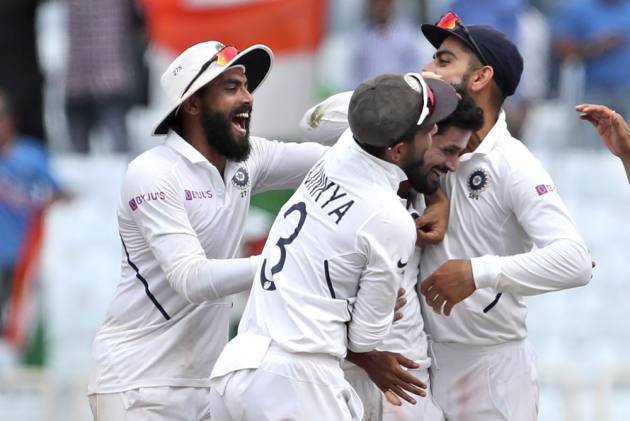 India completed a 3-0 whitewash of South Africa with another straightforward innings and 202 runs in the third and final Test at Ranchi, on October 22. SA were all out for 133 in their second innings with Shahbaz Nadeem notching the final two wickets. The Proteas didn't add any runs to their overnight total. Meanwhile, Mohammed Shami also took three wickets in the third Test, Umesh Yadav notched two, with Ravindra Jadeja and Ravichandran Ashwin taking a wicket each. Follow highlights of IND vs SA here.

10:24 hrs IST: Before receiving the trophy, Virat Kohli says, "Amazing. You guys have seen how we're playing. Making things happen on pitches that don't seem to offer too much, is something we're very proud of. Even when we travelled away from home, we wanted to compete. Getting into the right kind of mindset is something these guys have worked really hard to get into. Looking at the way these guys run into bowl, or even in the field, you can see that mindset. To be the best side in the world, you have to be multi-dimensional. Spin was always our strength, batting was never a problem for us. Ishant was the only experienced bowler for us. We said we can play an extra bowler, and as batsmen we said we'll get the job done. We've got runs in every Test match, our catching has been good too. (Goal) As I said, even without much experience, we travelled very well. We believe we can win anywhere. As long as we keep working with honest intent, those things will follow. We've wanted to be the best team in Test cricket, and as long as we compete, things will work out well for us."

10:15 hrs IST: Man of the match and man of the series awards go to ROHIT SHARMA! After receiving his awards, Rohit tells Sanjay Manjreker, "I'm thankful for the opportunity to the management for that opening slot. I can take a lot of positives about how to counter the new ball. The new ball is always a threat, and to be able to counter that will be a huge positive. I can take my game forward from that. (Discipline at the start in white-ball cricket too) Yeah, it's something that started in 2013 when I started opening in white-ball cricket. I realised you need some discipline at the start of the innings. It's a template to my batting that allows me some success to my batting. I believe that I can do that for the team, and there are lots of aspects that you need to be mindful of when you're opening. The support of the coach and captain helps. (Double hundreds) Test cricket is a different game. Getting that big score will give confidence moving forward. I always believe that once you are in, it is only mistakes that can get you out. We saw how hard it was to counter that new ball, and once you pass that stage, it's all about how you want to pace yourself. I kept telling myself I want to be there, I want to get a big score and take my team to a good position."

10:14 hrs IST: Shahbaz Nadeem has been fantastic in his Test debut. Regarding the bowler, coach Ravi Shastri said, "Extremely impressed. Yesterday when he got his first wicket, I was saying 'If Bishan Singh Bedi was watching, he would've said 'cheers young man'. It was a spinner's delight. To watch it from the outside was classical. 420 plus wickets, the guy has put in the yards, about time he gets the distance. Glad he finished off the game. In front of his home crowd. To take four wickets, what was remarkable was the way he started. There was no nerves, first three overs were maidens. Every ball was on the spot. That's because of his experience."

10:13 hrs IST: While speaking to Star Sports, Mayank Agarwal revealed that the bowlers put in a lot of effort in the whitewash Vs South Africa. "I was happy to make my debut in Australia, very happy to make whatever little contributions we can for the team. It's hard work over a period of many years that we're able to produce these results for the team. But kudos to the bowlers, for all the hard work they've put in and bowl the way they have. It's a lot of fun standing at short leg and seeing the opposition batsmen facing the heat, ducking and weaving out of the way or trying to fend. Shami, Ishant, Umesh & Bumrah keep giving back what they get. Not just bounces, they bowl wicket-taking balls. Good balls", he said.

9:44 hrs IST: Two overs is all it took in Day 4 for India to complete a 3-0 clean sweep over South Africa. The hosts are now at pole position in the World Test Championship table. Five wins in five matches! India win by an innings and 202 runs.

9:42 hrs IST:  OUTTTT!!! ANOTHER WICKET FOR NADEEM. TWO WICKETS IN TWO BALLS. A BIZARRE WAY TO END THE TEST MATCH.

Ngidi swings at the tossed up delivery. It goes at the non-striker's end at Nortje, and hits his left wrist. Nadeem, who is alert, grabs the rebound.

9:40 hrs IST: BRILLIANT CATCH BY SAHA. OUT GOES DE BRUYN. GOOD DELIVERY BY NADEEM. It was a low delivery, with de Bruyn making a last-ditch decision as the length was a little short. He looked to cut it but got an underedge and Saha did the rest.

9:30 hrs IST: All set for play! Out come India to complete their whitewash over South Africa. Also, the batsmen come in; Theunis de Bruyn and Anrich Nortje have some serious work to do. South Africa trail by 203 runs with 2 wickets remaining.

Shami to begin the day's first over.

9:24 hrs IST: While speaking to Star Sports, Umesh Yadav revealed that having good pace and bounce helps being successful at home. "If you have pace and bounce, you can be successful at home. Earlier they said as fast bowlers, you've to just be ready for reverse swing after the new ball's shine is done, to allow spinners to come in. But with Shami, Jasprit and I, we plan and we know how we have to go about bowling. All of us have pace. I'm happy to see our fast bowlers are doing what overseas pacers are doing. It gives us wings," said the pacer.

9:12 hrs IST: As India edge closer to a whitewash, the question is how long will they take to notch the two remaining wickets. South Africa have a lot to reflect after this match, and with their next opponent set to be England, some serious improvements are needed.

9:07 hrs IST: Earlier on Day 3, Umesh sent Quinton de Kock (5) walking back to the pavilion with a perfect length delivery. Then it was Shami, who coasted past the middle order, first dismissing Zubayr Hamza for a duck before getting rid of Faf Du Plessis (4) and Temba Bavuma (0), leaving SA at 22 for four.

9:04 hrs IST: Hello and welcome to Outlook's live coverage of Day 4 of the third and final Test between India and South Africa.