Rohit Sharma's 43-ball 85 helped India (IND) to an eight-wicket win over Bangladesh (BAN) in Rajkot as the hosts levelled the three-match T20 series 1-1. 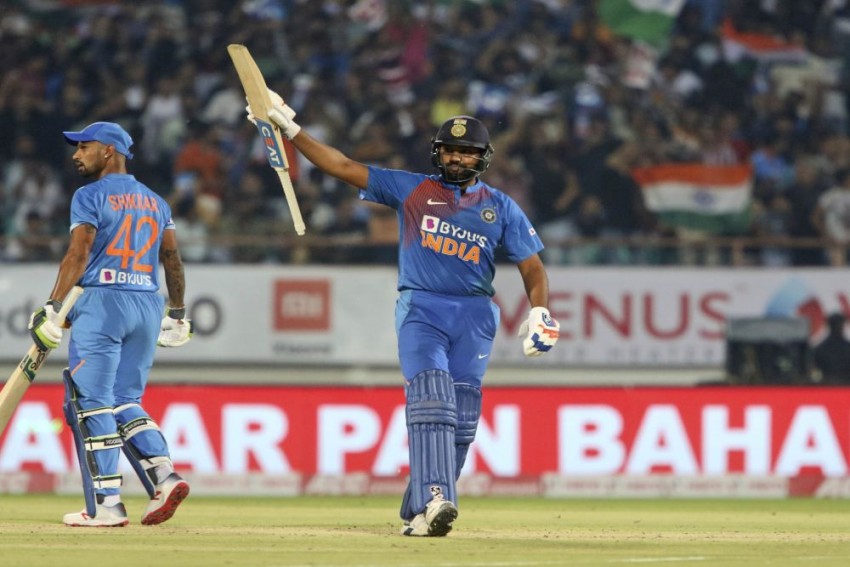 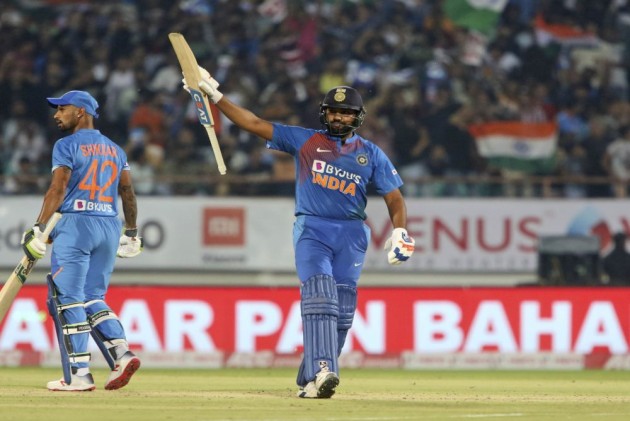 Skipper Rohit Sharma made it a memorable 100th T20 International blending grace with brutality in his 85 off 43 balls as India cantered to a series-levelling eight-wicket victory over Bangladesh in Rajkot on Thursday (November 7). (HIGHLIGHTS | SCORECARD | CRICKET NEWS)

Chasing an easy target of 154 on far better track compared to Feroz Shah Kotla, Rohit showed the gulf in class between him and the others on the park, hitting six fours and half a dozen of risk-free sixes as India chased the target in 15.4 overs.

The three-match T20 series now stands at 1-1 and the final game will be played in Nagpur on November 10.

Such was Rohit's dominance during the 118-run opening stand that it managed to overshadow Shikhar Dhawan's (31 off 27 balls) wretched form.

Earlier, Indian bowlers led by Yuzvendra Chahal made an impressive comeback to restrict Bangladesh to a sub-par 153 for 6 and then the dew also played its part on a good track where the ball was coming onto the bat.

Rohit teed off in the fourth over of the innings when he hit an off-drive, followed by a cover drive and then a straight six off Mustafizur Rahaman.

It was difficult to comeback from that point for Bangladesh as the Indian captain got boundaries and sixes at will.

Pacer Shafiul Islam was given the charge and hit over long-on for a six and slow sweep off spinner Afif Hossain brought up his 18th half-century in this format.

When off-spinner Mosaddek Hossain Saikat (0/21 in 1 over) tried to come round the wicket to try a negative line, Rohit hammered him for three sixes in the arc between long-on and mid-wicket.

Just when a fifth hundred in this format looked there for the taking, the skipper was out trying to hit a seventh six. Shreyas Iyer and KL Rahul then completed the formalities with 26 balls to spare.

Put into bat, Bangladesh could not capitalize on a good start as Chahal's (2-28) double breakthrough in the 13th over pegged the visitors back. A quick-fire 30 off 21 balls by skipper Mahmudullah Riyad helped them cross the 150-mark.

Seamer Deepak Chahar (1-25) and off-spinner Washington Sundar (1-25) did manage to stem the flow of runs but Khaleel's poor show continued.

Chahal, on his introduction, had almost removed a set Liton, but Rishabh Pant's urge to complete glovework quickly gave the batsman lifeline.

The TV replays showed that while whipping the bails off, Pant collected the ball in front of the stumps and hence it was declared no-ball. As per the law, every part of wicket-keeper's gloves has to be behind the stumps.

He got another reprieve on 26 after skipper Rohit Sharma dropped him at square-leg following a mix-up with Shivam Dube and Pant. But Pant made up for his mistake and ran Das out, with a direct hit in the eighth over, to break the opening stand.

Das's wicket slowed the scoring rate and that put Naim under pressure, who then gave a dolly to Shreyas Iyer at deep-mid-wicket off Washington as Bangladesh slumped were 83 for 2 in the 11th over.

And then Yuzvendra picked two wickets in the 13th over --Mushfiqur Rahim (4 off 6 balls), who gave a sitter to Krunal Pandya and then removed a set Soumya Sarkar (30 off 20 balls; 2x4, 1x6) -- as Bangladesh were struggling at 103/4. Sarkar was stumped by Pant and they never got the momentum back.