The left-arm pacer Starc, who has the top bowling figures in the pink ball with 42 wickets from seven D/N Tests, will rejoin the squad on Monday 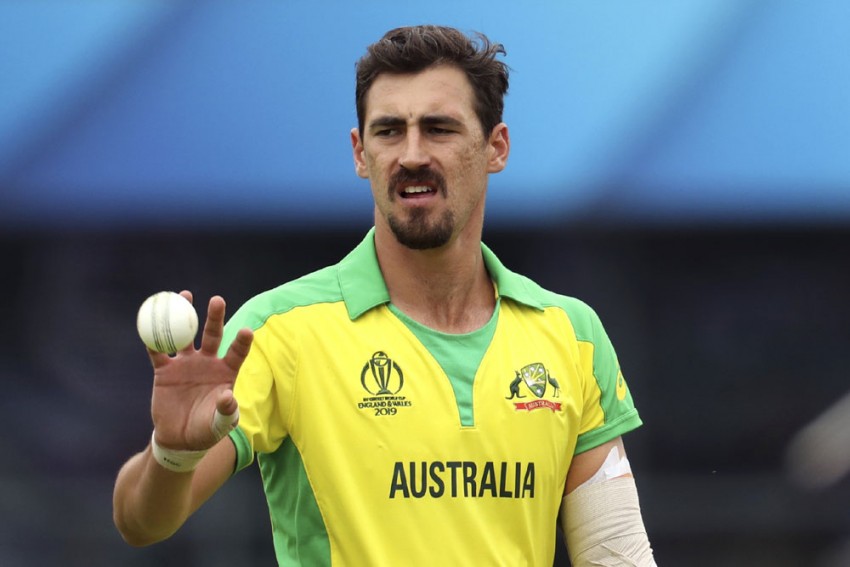 Australian team will be bolstered by the return of Mitchell Starc for the first Test against India as the senior speedster has been phenomenal in pink ball games, said his pace bowling partner Josh Hazlewood. Tour Schedule | Photo Gallery | News

The left-arm pacer, who has the top bowling figures in the pink ball with 42 wickets at an average of 19.23 in from seven D/N Tests, will rejoin the squad here on Monday after his 'compassionate leave' due to family illness.

"He's obviously a huge part of our team and attack. Everyone knows his numbers with the pink ball. We welcome him with open arms," Hazlewood said during a virtual news conference here on Sunday.

Starc was withdrawn after the first T20I against India in Canberra last week after learning of a family illness, but Cricket Australia on Sunday has announced that the Aussie pacer was ready to return.

"I think he would be fine. Nothing goes to plan. He is a professional player and would have been doing everything he could have over the last week. He will be ready to go and jump straight in,' Hazloood said when asked if a two-day preparation is enough.

Hazlewood said that one thing that pandemic has taught him is that nothing goes as per plan.

"If we've learned anything from this (pandemic) year, that nothing goes per your plan and we're always struggling with schedules and travel and different things. I'm sure this hiccup will be no different for him (Starc)," he added.

With vice-captain Pat Cummins, Hazlewood, Starc and spinner Nathan Lyon, the Aussies would have full strength, even as their batting faces some question marks with injury woes to opening duo of David Warner  Warner (groin) and young gun Will Pucovksi (concussion).

All-rounder Cameron Green, who bats in the middle-order, too faces injury concerns after suffering concussion from a Jasprit Bumrah hit during Australia A's tour match against the Indians in Sydney last week.

Asked about the disruptive preparation, he said: "It's been an unusual one. Pretty much every guy was playing soon after the IPL and we struggled in the limited overs cricket.

"It's been a little bit different but every International cricketer is sort of ready. We had a few days out in the middle of Adelaide Oval and still have some sessions to go before the game. We will be all ready to go and it's been a good prep so far."

Hazlewood dismissed Virat Kohli for the fourth consecutive time in ODIs this year but the pacer said he would look for a fresh start against the star Indian batsman.

"I've had some luck of late in the white ball stuff. You take a little bit into the next format but I think it's pretty much a fresh start, a different story again with the pink ball. He has obviously scored some runs last time with the red bull.

India won the historic Border-Gavaskar Trophy in 2018-19 and the series witnessed the Aussie bowlers lose intensity after the first two Tests.

Hazlewood hoped to "swing it around" this time.
"Probably our bowlers did not get enough rest in between innings with Pujara facing a lot of balls. I guess in a long series that's the batsmen's goal to score runs and win that Test but also to keep the frontline attack out of the field as long as possible, which probably exactly what happened last time around."

In the third Test in Melborune in December 2018, Team India declared for 443 for seven after batting for 169.4 overs that saw Starc bowling 28 overs, Hazlwood toiling for 31.4 overs while Pat Cummins sent down 34.

"We had spent a lot of time on the field in Melbourne with short rest in between and then again in Sydney.

"In four-five match Test series, that's a huge goal for the batters to not only score runs but spend a lot of time in the middle, to get some arms and legs of the opposition bowlers.

"Hopefully we can swing that around this time and keep the Indian bowlers out for as long as possible to reap benefits later in the series."
Hazlewood used the short ball to good effect in the first ODI against India last month to return with 3/55 and the pacer said it's something they would look to use against the Indians on Aussie wickets.

"Probably, it's a tactic all the time in Australia with the pace and bounce all time compared to other countries. The wicket also tends to be quite flat from time to time.

"If we are not getting results on the front-foot, we will challenge at different times, with the bouncer with the leg-side field. I think you know that has always been a part of the game here in Australia, probably from both sides," he concluded.
The four-match series will be live only on Sony Sony Ten 1, Sony Ten 3 and Sony Six channels.