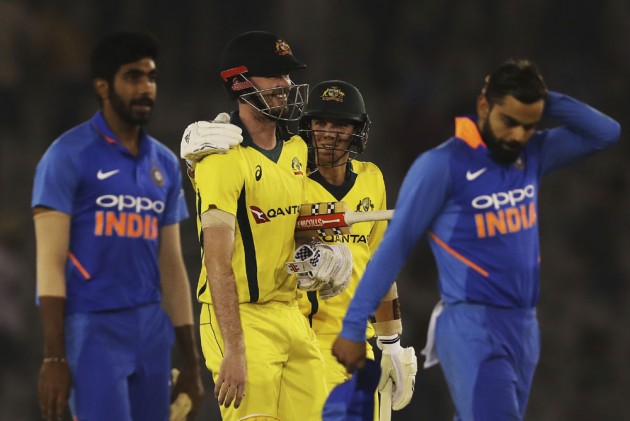 As many as 717 runs were scored in the fourth ODI match between India and Australia on Sunday at Mohali with the visitors registering their highest successful run chase in the format.

India amassed a total of 358 for nine with openers Rohit Sharma (95) and Shikhar Dhawan (143) stitching a 193-run stand for the opening wicket, but the Aussies responded with their own stand of 192 runs, for the third wicket by Usman Khawaja (91) and Peter Handscomb (117).

Then an unheralded Ashton Turner, playing in his only second ODI match, took the game away from India with an unbeaten 84 off 43. The chase was so clinical that the Aussies reached the target with 13 balls remaining.

Here are all the important numbers from the match:

- Khawaja and Handscomb have posted highest third-wicket stand against India in India. The previous high was 181 by Kiwis Ken Rutherford and Adam Parore at Baroda in 1994;
- Their stand was also second highest third-wicket stand in a run chase against India. The previous high was 242 by Steve Smith and George Bailey at Perth in 2016;
- Dhawan recorded his highest individual score. His previous best was 137 against South Africa in 2015;
- His stand with Rohit Sharma was the highest for India against Australia for the opening wicket;
- They have posted 4571 runs together for India, which is only behind all-time ODI record of 8227 by Sachin Tendulkar and Sourav Ganguly.
-Rohit, along with South African Hashim Amla, became the joint-fastest to reach 3000 ODI runs at home. Both the openers took 57 innings each. The record previously belonged to Virat Kohli (63).
- Rohit (218) overtook MS Dhoni (217) to become India's most prolific six hitters;
- Yuzvendra Chahal produced third most expensive figures by a spinner in India (10-0-80-1) for a completed spell of ten overs;
- Jasprit Bumrah hit the first ball he faced for a six. He thus joined Venkatesh Prasad as the only Indian number 11s to do so. It was also his maiden international six.

The five-match series is tied 2-2 and the series finale will be played at Delhi on Wednesday.