India captain Virat Kohli was in full flow on Day 1 of the Day-Night Test against Bangladesh at the Eden Gardens, leaving a lasting impression on everyone 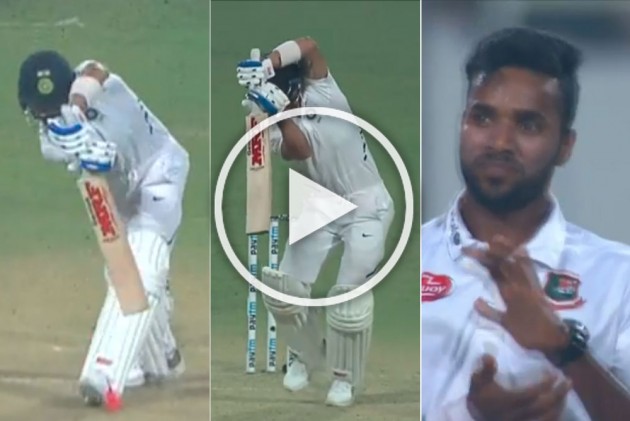 India captain Virat Kohli played some delectable drives all around the ground during his unbeaten 59-run knock on Day 1 of the historic Day-Night Test against Bangladesh at the Eden Gardens on Friday, leaving a lasting impression on everyone, including commentators and rivals.

After watching a straight drive in the 23rd over against Ebadat Hossain, an impressed Harsha Bhogle advised fans to play the shot in a loop and watch it the whole evening.

"Lovely, put that in a loop and play it all evening. There's something about the straight bat, pass the bowler," said Bhogle while doing commentary.

Some would even say that Hossain was, in fact, lucky to witness Kohli show first hand. And some overs earlier, in the 17th over to be precise, he was caught applauding a skippy cover drive from the Indian skipper.

Bangladesh won the toss and opted to bat first, but ended up becoming easy picks for Indian pacers. Ishant Sharma claimed his first five-for in a home Test in 12 years, and he was ably supported by Umesh Yadav and Mohammed Shami with the trio claiming all the wickets.

In reply to Bangladesh's first innings score of 106 runs, India were 174/3 in 46 overs with Kohli and Ajinkya Rahane (23) on an unbeaten 37-run fourth-wicket stand.