If Virat Kohli Wants To Do A Sachin Tendulkar, Workload And Captaincy Management Is A Must

The asking rate for Virat Kohli to catch up with Sachin Tendulkar will be pretty challenging – at least six centuries per year for the next five years.

Rohit Sharma, in his first full series as the official captain of the Indian T20 cricket team, was full of praise for Venkatesh Iyer after India completed a 3-0 rout of New Zealand at Eden Gardens in Kolkata on Sunday night. One needs to read between the lines when an Indian captain speaks. So, the applause on Iyer’s ability as an all-rounder may not be music to Hardik Pandya’s ears. But the India vs New Zealand T20 series has proved that this team has plenty of life without a Virat Kohli or a Mohammed Shami.

Rohit Sharma will see this T20 win as a stepping stone to undertake more responsibility for Team India. As Virat Kohli steps up to manage his workload, the window of opportunity for Rohit, who has broken Kohli’s record for the most 50-plus scores in T20 internationals, opens up even more. The ODI captaincy should naturally come to Rohit Sharma while Kohli manages Tests, a format he loves. Split captaincy is now an accepted and pragmatic formula, only India have been late to respond.

For an Indian cricketer, who loves to enjoy the spotlight and make pots of money from endorsements, giving up captaincy or quitting a format is never an easy decision. So, when Kohli said he was relinquishing T20 captaincy for India and Royal Challengers Bangalore, it may have come as a shock to many, but deep within a ‘split’ was visible. The Kohli aura and the way he dictated terms was clearly on the wane and Rohit’s emergence as a force, purely on form, surely made Kohli wary about the way forward. Ravi Shastri coming to the end of his tenure as head coach of India only added to Kohli’s self-doubt.

Intelligent cricketers always don’t love to wear the crown. Sachin Tendulkar is a prime example. In Indian or Pakistani cricket ecosystem, the crown of captaincy is full of thorns. One never knows who will come to bite you. The enemy sits within the establishment. The administration will never let a cricketer grab power forever. No matter what they say in public, superstar cricketers are a jealous and greedy breed. Kohli is one of the most successful cricketers in the world both in terms of performance and money earned. He has won enough accolades in life and will be remembered as a legend. Naturally, officials and cricketers, both past and present, will be envious of him. This is the truth of Indian cricket.

Talk of Rohit Sharma’s elevation as India’s limited overs captain has been doing the rounds ever since Mumbai Indians won their fifth IPL title in UAE last year. Critics have repeatedly questioned Kohli’s ability as a limited overs captain because not only IPL, Kohli has no major ICC trophy is his cabinet.

Although he may not quite agree, by his own lofty standards, Kohli’s form in the last two seasons have been worrying. Given the rate at which Virat Kohli scored his 70 international centuries, he was on a perfect path to get past Sachin Tendulkar’s 100 international tons. Two years without a century means, Kohli’s plan to reach the Tendulkar milestone has been considerably pegged back.

And the absolute dominance that Kohli has had in the team in all three formats of the game has considerably faded. Apart from a 57 against Pakistan, a World Cup match that India lost by 10 wickets, Virat Kohli has been facing a run drought for long. Rohit Sharma, on the contrary, has proven that he is good enough for all three formats. Rohit’s records in the past two years have been relatively better than Kohli and his performance on the challenging tour of England have proved that Rohit Sharma is capable of handling testing playing conditions where the ball seams and swings.

At a time when the Indian top order, including Kohli was found out by the English pacers, Rohit Sharma stood his ground, scoring a workmanlike century (127) in the fourth Test at The Oval that helped India secure their second ever win at the famous London venue since 1971. In the second Test at Lord’s Rohit Sharma scored 83 in India’s first innings. The knock came off 145 deliveries, the equation clearly demonstrating that the strokemaker had the temperament and technique to prosper at the highest level. Interestingly, Rohit has been rested for the home Test series against New Zealand. 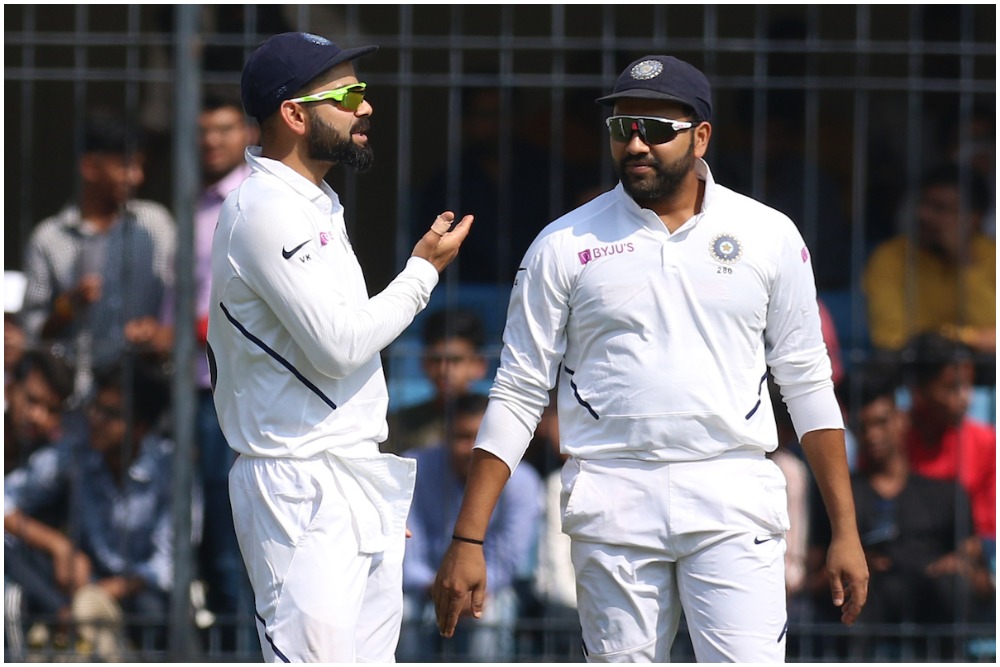 Rohit Sharma has proved to be an all-format player while Virat Kohli has been facing a run drought by his own lofty standards. Photo: BCCI

Virat Kohli has not scored a century in the last two years. His last hundred (136) came in the Pink-Ball Test in Kolkata in November 2019 against Bangladesh. Twice in the recent series in England, the captain failed to convert a 50-plus score into a hundred, clearly showing that he has let pressure get to him. In Tests and ODIs, Rohit has a better average than Kohli in the last two years. Since January 1, 2020, Rohit has played 11 Tests, scored 906 runs inclusive of two centuries and at an average of 47.68. Kohli has played 12 Tests, scored 563 runs at an average of 26.80 and without any centuries.

It’s a similar story in ODIs. Rohit played nine matches, amassed 519 runs with two centuries and at an average of 57.66. Kohli’s numbers are relatively paler – 15 matches, 649 runs at an average of 43.26 and with no hundreds.

No matter how much they say that rankings don’t matter and records are for the statisticians, every international sportsperson has selfish interests. At a time when every performance is monetized by managers and agents, it is imperative that form has to be consistent because every run scored means certain monetary gains. And two years without a hundred from a man like Virat Kohli is surely a major aberration not only from a cricketing point of view but from the brand value angle as well.

For Kohli, who turned 33 on November 5, it is pertinent to remember that several top cricketers like Virender Sehwag, Gautam Gambhir, Suresh Raina and Yuvraj Singh, suffered burnouts in their early thirties despite being prolific run-getters.

Given the amount of cricket Indians play throughout the year, burnout is not unexpected. Kohli is among the fittest cricketers in the world and he can ill afford to suffer a burnout or get sidelined by injuries. Recently, Kohli invested in a wellness startup Hyperice and as the global ambassador, will help market the brand in India.

Kohli is among elite athlete-investors and that list includes tennis Grand Slam champion Naomi Osaka, the highest paid female athlete, NBA star Ja Morant and PGA Tour champion Rickie Fowler. Kohli’s net worth is conservatively estimated at 86 million dollars ((638 Crores INR) and every bit of it is built on the fact that he is among the premier batsmen in the world and with an image that projects aggression, intent and self-confidence.

Kohli is not Tendulkar. Not yet. The Little Master is still the richest cricketer in the world with a net worth of 170 million US Dollars (1090 Crores). Dhoni is at USD 111 million (767 Cr) and Kohli is at No. 3 (638 Cr). The valuation is directly proportional to the longevity of these cricketers.

Tendulkar’s close to 25-year career not only won him the tag of cricket ‘god’, but just like his cover drive, he knew when to withdraw from captaincy. Not once but twice, Tendulkar relinquished captaincy of the Indian team. Tendulkar had two stints of captaincy, in 1996 and 1999. On both occasions he was forced to give it up after the team fared poorly under his leadership.

Tendulkar never won an IPL as Mumbai Indians captain. The batting icon revealed that the real reason behind giving up the captaincy was because it started to affect his personal life.

“It had started affecting me as a person. And every defeat that I faced or experienced, it really hurt me on and off the field. Also, when I was back with my family I couldn’t switch over; I would be constantly thinking about it. I wanted to give my best and I always did it; and results which I earlier spoke about, the matches we should have won. There were disappointments in those games and it really hurt me and it really disturbed me that the games which were in our pockets were taken away from us,” said Tendulkar.

Although India did not do well as a team under Tendulkar, the Little Master had a great phase between 1996 and 2000. He scored 39 international hundreds, 13 of them as captain. Tendulkar played for 13 long years after giving up captaincy. In that period, he scored 49 centuries – 27 in Tests and 22 in ODIs!

According to former India all-rounder Madan Lal, who coached India from 1996 to 1997, Tendulkar was so involved in his own performance that he failed to deliver as captain. "I won't agree with you that he was not a great captain. But he was so involved in his own performance, he found it difficult to take care of the team. Because as a captain you not only need to take care of your performance, but also get the best performance from the other 10 players. It is critical how you manage them," Madan Lal has been quoted as saying.

Kohli’s template for the future could be similar. If Kohli wants to do a Tendulkar, then workload management is a must. Relieving himself of the T20 captaincy is perhaps his first step towards some self-interest. And why not? A Test cricket fan, Kohli would have set himself two goals – an average of 100 or 100 international hundreds. Even Don Bradman could not achieve an average of 100, but like Tendulkar did, a century of centuries is not impossible and Virat Kohli will surely back himself to reach it. 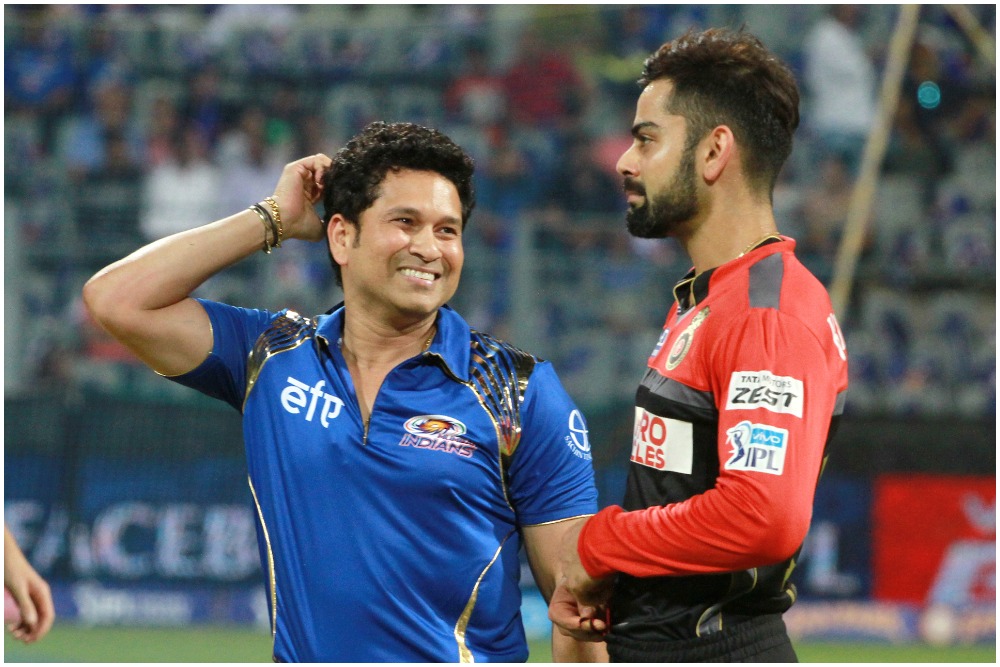 Before he got stuck, Kohli had scored 70 hundreds, one less than Ricky Ponting. Two years without a century at the peak of his career means Kohli is left with about five to six years to climb Mount 100, assuming he is fit to play Tests and ODIs, suffers no injuries and the selectors are willing to five him extra rope should he require one.

Tendulkar enjoyed a lot of rope from the selectors when his form ran out towards the end of his career. Tendulkar scored 74 in his final innings against the West Indies at Wankhede Stadium in November 2013. His last Test century (146) came in Cape Town against South Africa in January 2011.

Rohit Sharma’s career can only get better but Virat Kohli can be India’s flag-bearer in Tests. And he deserves to lead India in this format. Kohli should be happy to play under Rohit in ODIs and focus on just two formats where the probability of scoring hundreds is considerably higher. The asking rate for Kohli to catch with Tendulkar will be pretty challenging – at least six centuries per year for the next five years!

India’s international calendar in the next two years is pretty stuffed. There will be a T20 World Cup in Australia in October-November 2022. India are scheduled to play about seven Tests, six ODIs and 20-plus T20 internationals apart from a minimum of 18 IPL matches featuring 10 teams.

While Kohli will be happy to play as a batsman, he will be keen to lead India in the 50-over World Cup scheduled in India in 2023. But for that to happen, the ecosystem has to side with him and his form should be good enough to inspire confidence and faith in the selectors and fans alike. And then there is the Rohit Sharma factor!