As per ICC playing conditions guidelines for the WTC final, if required the reserve sixth day can now come into effect with six hours of play lost on Day 1 itself 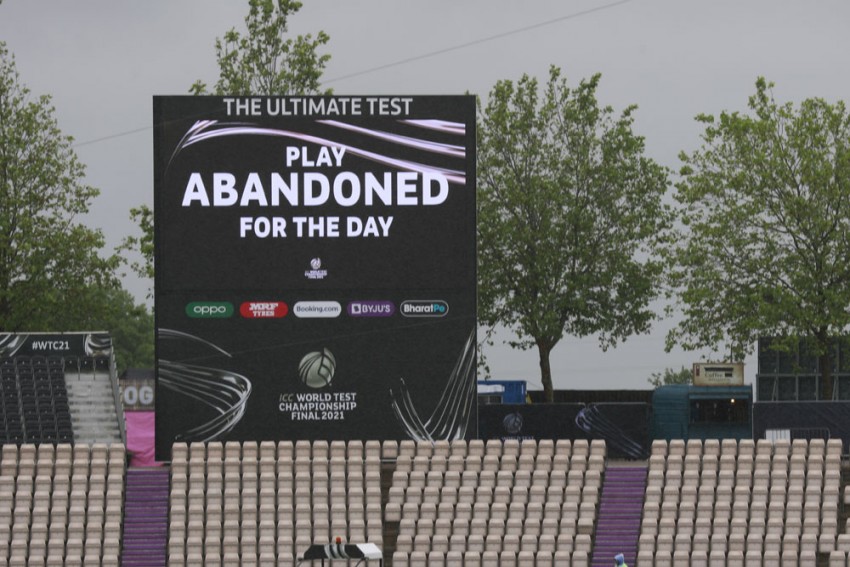 A large screen announces that the play for the day has been abandoned on the first day of the World Test Championship final cricket match between New Zealand and India, at the Ageas Bowl in Southampton, England, Friday, June 18, 2021.
AP Photo/Ian Walton
PTI 2021-06-18T19:57:51+05:30 ICC WTC Final, IND Vs NZ: First Day's Play Washed Out, Reserve Day To Come In Force 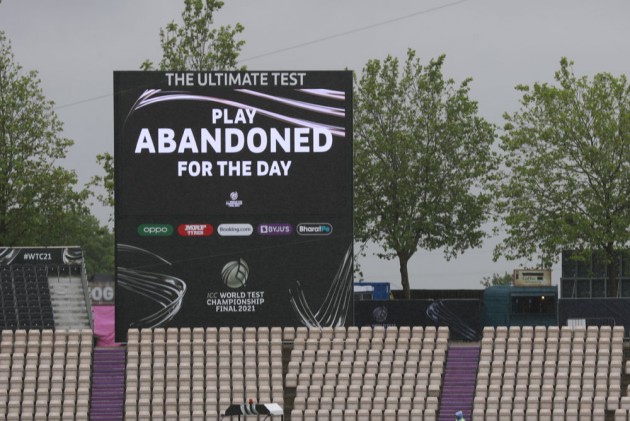 The eagerly-awaited opening day of the World Test Championship final between India and New Zealand was rained out here on Friday, which is set to bring the reserve day into the equation.

As per ICC playing conditions guidelines for the WTC final, if required the reserve sixth day can now come into effect with six hours of play lost on Day 1 itself.

There was forecast of rain and thundershowers and the heavens opened up last evening with relentless downpour continuing till afternoon.

With puddles forming throughout the outfield, even the best drainage system couldn't have possibly forced some action on the opening day.

While there has been talk about Southampton being the preferred venue, it has been learnt that BCCI was taken into confidence by both the ICC and England and Wales Cricket Board before they finalised the venue which also has a five-star facility within the premises, helping create a tight bio-secure bubble.

The English weather is known to be fickle and in any case, there was no guarantee that the match being played at any other venue would have not led to a wash-out on the first day.

In the last five years, England has hosted 32 men's Test matches and only as many as four have ended in draws which is an indication that even if rain plays spoilsport, the final will go the distance.

Giampiero Boniperti, Part Of 'Magical Trio' At Juventus, Dies At 92